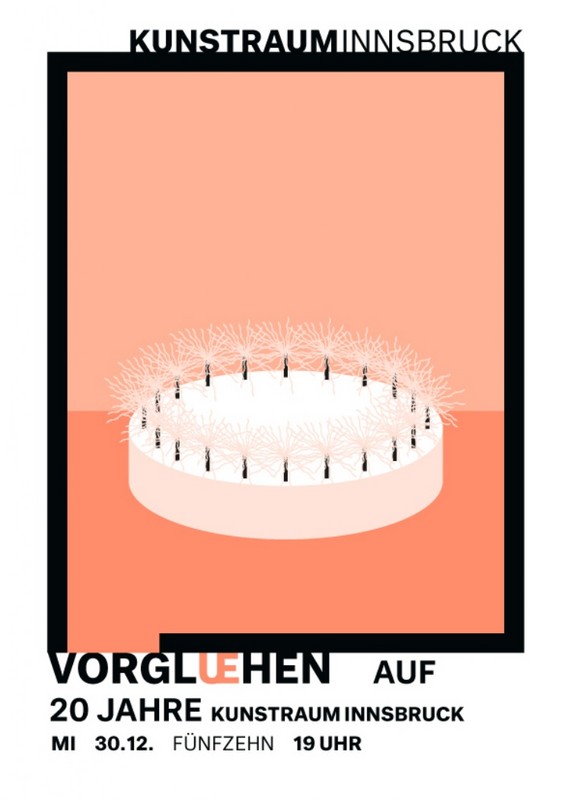 To celebrate the 20th anniversary of the Kunstraum Innsbruck, the history of the non-profit art association shall be set in relation to its location, the city of Innsbruck. This anniversary shall not just shed light on the institution's history, but also on the working conditions of the association and of artists working in the Tyrolean capital. For this purpose, artists from the younger generation, who have already been dealing in various contexts with the Kunstraum, have been chosen for a group exhibition. The latter's title "set in motion" shall quite literally get the place going and transform it into a laboratory in which the artists, while the exhibition lasts, keep changing their works and adapting them. On this note, the platform of the exhibition room shall trigger a dialogue on the location and its cultural politics, on the working conditions of art and art education. Moreover, the opening takes place on the occasion of the Innsbrucker Premierentage, which roots the anniversary even more firmly in the cultural life of the town. Katharina Cibulka (born in Innsbruck in 1975), hitherto known for her documentary video installations, for the first time will intervene sculpturally and draw a boundary across the white exhibition room. The spatial line, spanning some twenty metres, and consisting of vertical, weathered wooden shingles, marks a border inside the room and thus bears reference to the latent refugee crisis. Florian Hafele (born in Innsbruck in 1979) develops a new spatial body, a white cube on thin black square steel tubes, that seems rolled into the room like a die. The human figure, hitherto used in sculpture, and the narrative inscribed in it, thus is abstracted into a mathematically decipherable object. Christoph Hinterhuber (born in Innsbruck 1969) presents a computer-animated word and techno sound installation. His point of departure is a stringing together of imaginary words that sound as if deriving from youth culture and video games. The artist in this way translates the sound poems of Dada into contemporary techno culture. The painter Heidi Holleis (born in Innsbruck in 1974) uses ash to create large-format abstract works on canvas that gain their vulnerability, but also a certain tenacity, from their ash-based painting ground. The painter and draughtswoman Maria Peters (born in Innsbruck in 1966) has chosen for the starting point of her artist work the virtual existence of alter egos that pursue a variety of artistic practices in the past and the future. She brings these different characters together in a picture blog that she develops in the course of the exhibition. In his sculptures, Christoph Raitmayr (born in Innsbruck in 1977) combines everyday objects into poetic portraits which he breathes new life and history into by way of their seemingly arbitrary arrangement on various pedestals and platforms. Benjamin Zanon (born in Lienz in 1981) has been back in town only since the summer, after finishing his studies at the Kunstakademie Düsseldorf. His drawings appear like maps spreading dreamlike across urban spaces and landscapes. The exhibition will be accompanied by a programme of events, including artist talks, lectures and readings, and culminating in a finissage, on December 30, at 7:00 p.m. Under motto "Preparty 20 Years of Kunstraum Innsbruck," we will party right into the anniversary year. For the months to follow, we are preparing various other events to enlarge upon, discuss and call to mind the Kunstraum anniversary in history and present.
www.kunstraum-innsbruck.at