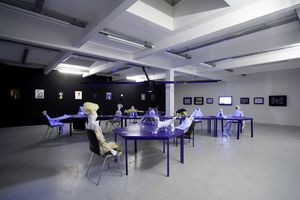 Though wilfully renouncing any form of conceptual self-assertion and formal stringency of artistic means, certain topics may be made out regularly in Tjorg Douglas Beer’s work (b. 1973, lives in Berlin). For instance, his imagery circles around global questions of war, politics, as well as social and power structures. He generates various scenarios out of elements that bear reference, among other things, to the absurdities of the world of the media. And he approaches these topics without becoming moralistic.

Beside the installation, the exhibition presents sculptures and new portraits. The templates for the latter were colour photocopies, etchings and heliogravures. They depict the sickly pale faces of mannequins that have have been pasted over and painted. Mutated subjects of an inexplicable experiment. The applications cut out of carton, meanwhile, provide us with fragmentary headlines or slogans.

In addition to his own artistic work, Beer is one of the iniators of Galerie im Regierungsviertel, THE FORGOTTEN BAR, and The-New-World.TV.

The exhibition will be accompanied by an artist book published in cooperation with Galerie der Stadt Backnang.