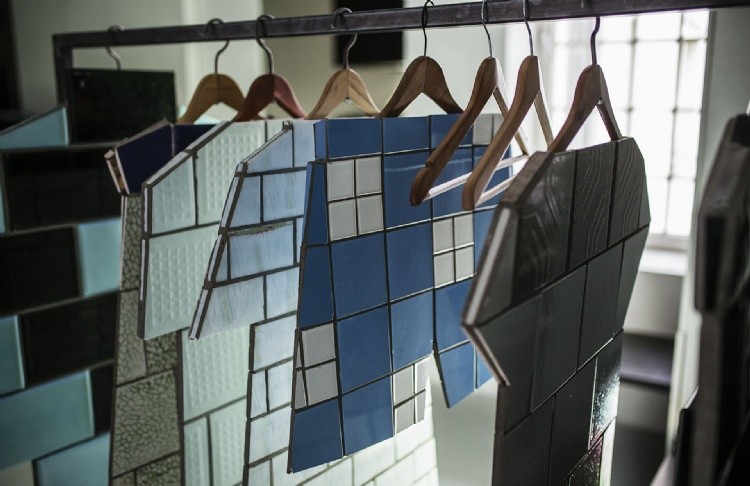 With her exhibition Alterations, the Ukrainian artist Zhanna Kadyrova (b. 1981) presents her first solo exhibition in the German-speaking world. The works on show deal with her native country’s political present resp. with the ideologically and aesthetically charged heritage of the Soviet era and the failure of democratic reforms. The principal focus of her artistic work is sculpture for public spaces, and in the process she has concentrated on three core themes: the choice of materials, the understanding of volume, crowd and space, and the interaction with the observer. For many of her sculptures and spatial interventions she uses everyday materials, such as asphalt, concrete, tiles or bricks. The surfaces she likes to cover in tile mosaics, as have already been popular in Soviet times for the embellishment of heroic portraits. The tiles stand up to wind and weather and therefore can still be found in many place in the Ukraine. Kadyrova appropriates the style of Constructivism and Social Realism for her own purpose, in order to translate it into an image repertoire for questioning the status quo.

At the heart of the exhibition stands the installation Crowd. Year (2012), consisting of 33 individual glass panels showing newspaper collages. In 2012, Kadyrova collected newspapers from various countries. The cutting, in each case, shows the cover picture without the text. In the empty space thus freed up, all the persons depicted in the paper are assembled into a collage. The artist here reflects on the phenomenon of the crowd and its impact on society. How is the crowd depicted in the mirror of the newspaper? By way of the images the weight of the respective coverage quickly becomes obvious, as the persons are ordered according to image size resp. to demographic and thematic priorities. The crowd phenomenon, as a social movement, also reflects the politics and the life of present-day Ukraine. Kadyrova herself belongs to the young generation of artists who began their career with the Orange Revolution in 2003 and 2004 and is today one of the best-known young Ukrainian artists. Numerous awards and exhibitions attest to that. The work Crowd. Year, by the way, is currently undergoing a continuation at the Ukrainian pavilion at the 56th Venice Biennale. On the occasion of the anniversary of the Maidan protests, which took place in December 2013, the artist collected international newspapers, in order to present a cross section of the reporting on this event after the event. In reference to Elias Canetti’s "Crowds and Power," Kadyrova hints at the political effect of the crowd as an image of society, just as the observer may pass through this crowd and determine their own position.

In the photo series Experiments (2014), Kadyrova presents us with panorama views of the city of Kiev, which she in places has treated with acid. The visual effect corresponds to the impression of white billows of smoke from artillery bombardment, as we are familiar with from the news coverage on conflict areas. The observer can’t help but think of the war going on along the Ukrainian-Russian border. In a first version of this work, the artist, in unintentional foresight, even used the panorama of Donetsk, which in this form no longer exists.

The two other works shown may serve to represent the scope of the artist’s sculptural oeuvre. Second Hand (2015), placed near the entrance, deals with the Darnitski Silk Factory, during the Soviet era the largest clothing and textile manufactory in the country. The complex itself was an ideological and collective centre in the lives of the workers, with a comprehensive programme for communal activity, covering the areas of leisure, culture and education. There even was a greenhouse operated all year round. With the collapse of the Soviet Union, the factory was closed and has now partially fallen into ruin, as it was hard to conceive of a new use for it due to the sheer size of the buildings. Individual parts of the latter are provisionally used as a shopping mall, which means that the formerly collective workspace has been transformed into a place of individual economy. In a series of interviews Kadyrova spoke to some of the people who used to work there and asked them about the present situation. The items of clothing, however, are no longer made from textiles, but literally dissolved out of tile fragments from the buildings, and serve as silent witnesses to the ongoing change.

In the project room, Kadyrova presents her hologram entitled Monument to a New Monument (2007–2009). The inhabitants of Sharhorod, a small Ukrainian town near the Moldavian border, were not able to agree on the design of a monument, so that Kadyrova created a standing figure wrapped in cloth, made of white tiles. The population, in the course of conversations and meeting with the artist, were involved in the sculpture’s development process. The whole discussion resulted in a new overall design for the town square, with benches, paths and little green spaces. Zhanna Kadyrova subsequently was presented with an honorary diploma in urban development by the town. In the current political situation of the Ukraine, when family structures that have grown over a long time are split apart along political lines, with supporters of the Ukrainian cause on the one side and the pro-Russian view on the other, it is not hard to understand why this work is of such central importance to the artist.

With very simple stylistic devices – be it a newspaper collage, a tile ornament, or a panorama view of Kiev – Zhanna Kadyrova very subtly documents the current political struggle in the Ukraine, without resorting to the ideological weaponry invoked by the political opponents in the fight against each other.

Zhanna Kadyrova graduated from the Taras Shevchenko State Art School, Kiev. She works with various media, with photography, painting, drawing and sculpture, but she is mainly known for her sculptural works in public spaces. Nominated for the PinchukArtCentre Prize in 2009, she became the first Special Prize Winner of the PinchukArtCentre in 2011 with her “Asphalt” works. Kadyrova is a member of the R.E.P. group and of the Penoplast musical performance group. She has elaborated her own recognizable artistic style distinguished by using fractured tiles.

Her works have been extensively exhibited worldwide, including, in 2013, the 5th Moscow Biennale, the 55th Venice Biennale, “Nouvelles Vagues”, Palais de Tokyo, Paris. In 2014 she participated in the residential programme supported by Baró Galeria, Sao Paolo, Brazil, which she concluded with a solo exhibition entitled “Street Collection.”

A catalogue will be published plus five unique artworks (Shot, 2015) to support the production of the catalogue and the exhibition.
www.kunstraum-innsbruck.at