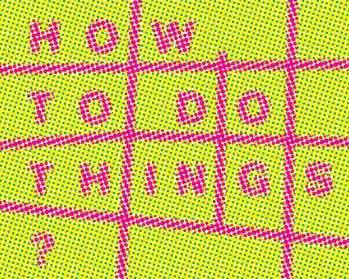 From September 2 until October 8, 2006, Kunstraum Kreuzberg/Bethanien will present the results of the exhibition series How to Do Things? – In the Middle of (No)where... that were produced during the residencies of twenty-eight artists in Budapest, Kiev, Bucharest, Copenhagen, and Berlin.

Initiated by Dorothee Bienert and Antje Weitzel, the project took artists and cultural producers from fourteen countries of an imaginary “Central Europe”, arbitrarily created by a finger on the map, and brought them together at various locations over the course of a year. The circle includes the old EU, the new EU, EU aspirants, and non-EU countries: The Netherlands, Denmark, Germany, Poland, Lithuania, White Russia, the Ukraine, Moldavia, Romania, Slovenia, Hungary, Austria, the Czech Republic, and Slovakia. How to Do Things? – In the Middle of (No)where... playfully defies real and mental borders and raises questions regarding the geographical-territorial notion of present-day Europe and its underlying identity constructs.

Within the broad thematic scope of social utopias, the artists were invited to develop new projects during a month-long residency at a location unfamiliar to them and to present them in an exhibition at the partner institutions. The term social utopias serves as an impetus to reflect on diverse European realities and contexts and to discuss collective visions and goals as well as questions about participation and the power of agency.
All of the artistic projects can be viewed together for the first time at the exhibition at Kunstraum Kreuzberg/Bethanien. The works range from personal observations of cultural traditions and heterogeneous European realities of life to examinations of local situations to abstracter reflections on identity, public sphere, and representation.

The artists will be present at the opening on the 1st of September and, on the 2nd and 3rd of September from 3:00 p.m. to 6:30 p.m. in the Casino/Bethanien, will present their works and recount their experiences in Budapest, Kiev, Bucharest, Copenhagen, and Berlin. An exhibition catalogue will be available.

A project of uqbar – Gesellschaft fuer Repraesentationsforschung e.V.
The project was realized with the support of the European Commission – Culture 2000, the Hauptstadtkulturfonds, the European Cultural Foundation, the Allianz Kulturstiftung, the Institut für Auslandsbeziehungen ifa, the Danish Arts Council, the Minstry of Culture of the Republic of Lithuania.