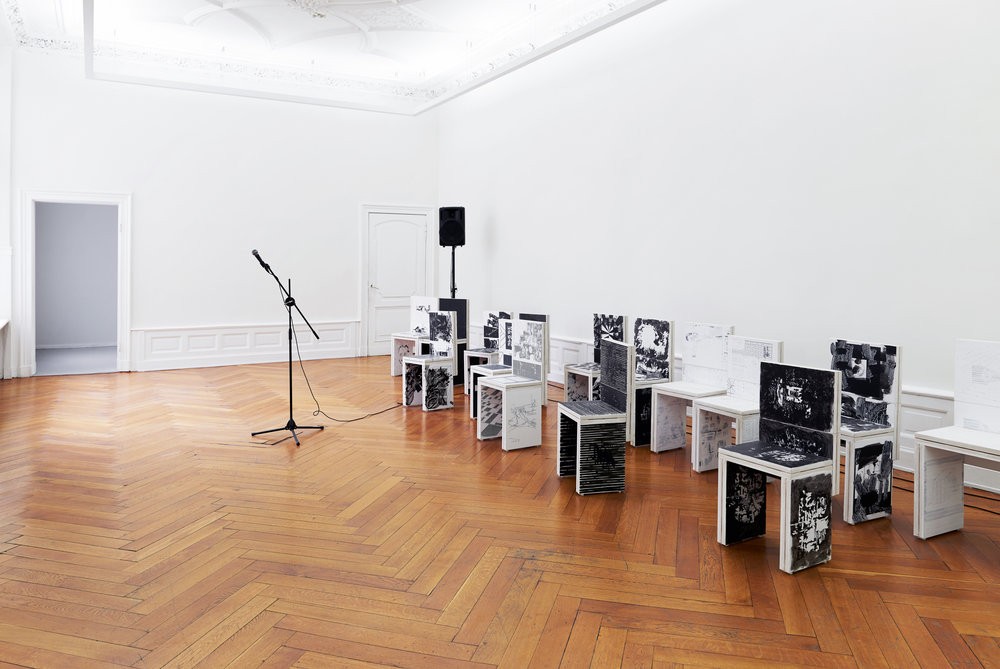 The exhibition “Nobody Spoke” (September 9 – November 18, 2017) by the collaborative artist practice Art & Language marks the culmination of the KUNSTSAELE’s examination of artistic practices dedicated to epistemological and performative aspects of art. From the beginning, Art & Language, which has been active in various configurations for almost five decades and is presently carried by Michael Baldwin and Mel Ramsden, has taken a skeptical stand against certain glorifications that characterize aspects of the historiography of conceptual art in Western Europe and the United States both in the past and today. In addition to new installations with painting-objects, which, within the performance framework of the project called The Jackson Pollock Bar, make the painting debates of the past years look dated, the exhibition also focuses on collaborations with The Red Krayola, the musicians’ collective organized by Mayo Thompson.

From the outset, Art & Language has lived with the paradox of being perceived as an‘institution of artistic institutional critique.’ It was one of the first objectives of the collective to develop alternative forms of art production and art mediation and to pursue a radical practice across institutions, genres, and categories. Their entire history is marked by a high level of productivity, but also by an exceptionally humorous – rather than embittered – opposition to the exclusive purity of some conceptual artists, resistance to career-oriented concepts of artistic practice, and a refusal to accept the practical conventions and commodity fetishes of a capitalist art market. Even today, Art & Language stands, above all, against a widespread unwillingness to understand language, discursivity, and performance, not only as a complex of commercial mediation, but also as a prerequisite of and as site for a self-critical and self-reflective art, whose production never congeals in the security of consensus.

At the center of “Nobody Spoke” at KUNSTSAELE, the artists, in collaboration with The Jackson Pollock Bar present a theory installation, experienced on different levels of mediation (including, among others, a speech-performance with an audience), that is a reflection on the foundations of art and world perception. Here, the paintings are assembled into furniture, while in other works on the walls the images appropriate text, becoming texture, filling spaces that arise between the exhibition and book formats with historical and contemporary questions appealing to the viewers’ habitual patterns of experience, calling them into consciousness – placing them once again in question. The collaborations with the multifaceted “Abstract’n’Roll” music group The Red Krayola, can be seen and heard in a special section of the exhibition, allowing insight into the recently – as a result of their collaboration on the album “Five American Portraits” – re-intensified encounter between two of the most rewarding reference models in contemporary Western art history.
www.kunstsaele.de