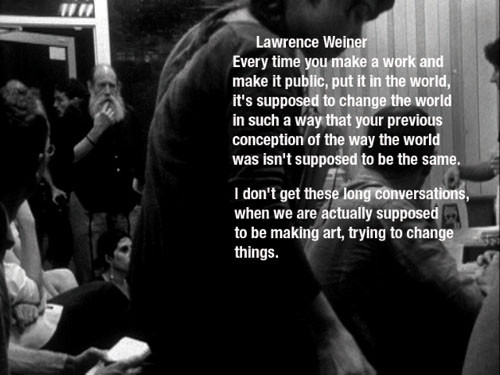 New York Conversations is a text film. Shot in a Chinatown storefront converted for this occasion into an improvised kitchen/restaurant, the film documents three days of public conversations between artists, critics, curators, and a free floating public. The film is a subjective record of these conversations, which explored various topics ranging from questions concerning precarious and immaterial labor in the field of art, possibilities for non-alienated life and working conditions, the feasibility of artistic freedom, and possible means of reclaiming dignity in the work of art criticism, to more immediate questions concerning whether what was actually taking place throughout the course of the event was in fact an artwork. In the tradition of underground cinema, essay films, and experimental language–based films from the conceptual era, New York Conversations insists upon a certain degree of participation from the audience—by way of critical reading—over passive spectatorship or escapism.

Anton Vidokle was born in Moscow and is currently based in New York and Berlin. His work has widely been exhibited in shows such as the Venice Biennale, Lyon Biennial, Dakar Biennale, Lodz Biennale, and at Tate Modern, London. As founder of e-flux, he has produced projects such as Next Documenta Should Be Curated By An Artist, Do it, Utopia Station poster project, and organized An Image Bank for Everyday Revolutionary Life and Martha Rosler Library. Vidokle initiated research into education as site for artistic practice as co-curator for Manifesta 6, which was canceled. In response to the cancellation, Vidokle and others set up an independent project in Berlin called Unitednationsplaza—a twelve-month project involving more than a hundred artists, writers, philosophers, and diverse audiences.