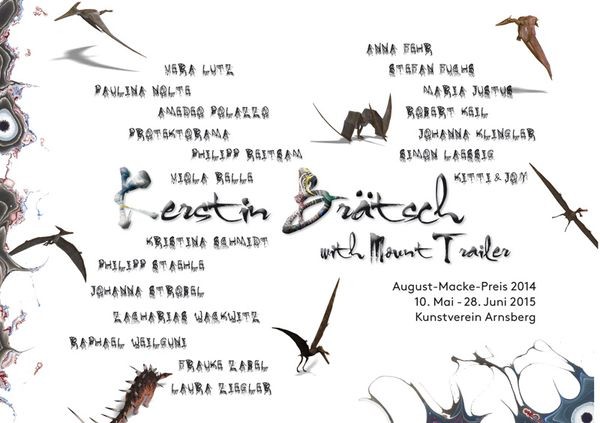 The August Macke Prize for painting granted every three years by the county of Hochsauerland, was awarded in 2014 to Kerstin Brätsch.

The exhibition in association with the prize opened at Kunstverein Arnsberg on May 10th 2015. In the exhibition, entitled ‘Kerstin Brätsch with Mount Trailer’, Brätsch is showing new works alongside works by students of the Akademie der Bildenden Künste in Munich, encompassing twenty-two positions.

The prize to commemorate August Macke has been awarded since 1959 to distinguished artists from the younger generation. The same year Kerstin Brätsch was awarded the prize; she held a position as a guest professor at the Akademie der Bildenden Künste in Munich. Out of this situation, a concept for the exhibition at the Kunstverein Arnsberg developed: Brätsch invited her students to participate alongside her in the exhibition.

‘Mount Trailer’ was a journey undertaken by Kerstin Brätsch and her students at the beginning of the year to the Lenzenberghütte mountain lodge in Allgau, Germany. During this trip, a multitude of works and actions arose around an exhibition staged in the mountain cottage, where their efforts worked towards defining a present-day ritual, traces of which can be followed to the Kunstverein Arnsberg.

Collaged images of the performances, hikes, readings, plays, and meals undertaken by the group form the literal background onto which all the exhibited work is presented. A conversation and collaboration comes forth with this mode of presentation providing a space for painting to be brought into a wider sphere of action, allowing its role to be newly defined.

Greetings!
SUNRISE TO SUNSET
Satellite, Trailer, Representation, Display, Narration, Movement, Paths, Time, Transportable, Mobile, Extension, Expansion, Capsule, Mask
Retrospective Forecast (arrows going back and forth)
Exploration of the foundations and techniques of various conscious and unconscious rituals and customs
How to activate our (art)-objects through use- and not only exhibit them as sterile and untouchable?
The talismanic is unstable
To look a face
The sign of a conscious subject
Sleeps a song in all things/ they are dreaming on and on/ and the world begins to sing/ if you speak the magic word
The amphorae crouch like directing dudes on top of our moving truck- and all of us act like puppets ourselves for their sake.
Why are you wearing a mask? Were you burned by acid or something like that? – Oh, no, its just they’re terribly comfortable, I think everyone will be wearing them in the future.
Did I Do It Myself? If So, Help Me, If Not Join Me
The journey as a way
I am Gaia, who are you?
Kaleidoscope, pupation, sloughing
Instead of leaving it to dear God, I will call myself by my name, which I’ve just thought of.
To Spell Out Ones Own Name/
To Put A Spell On /
The New Spelling
Betwixt and Between
Put on a common mask / exchange in it whatever there is not to show/ get out eventually / and have a story out of it
“Today everything is different”
Happy as hell