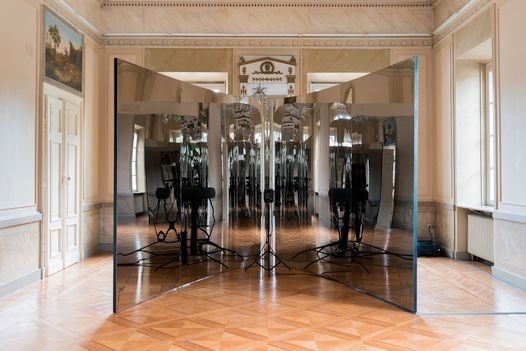 The Kunstverein Braunschweig dedicates a comprehensive solo exhibition to Carsten Nicolai, one of the most significant representatives of contemporary sound art. A well connected artist, Nicolai operates collaboratively at the interface between genres: fusing art, music, and natural science into an integrated sensory experience. He often begins with physical phenomena such as sound and light frequencies or electromagnetic fields, which play at the periphery of the audible. To enable such phenomena to be seen and heard through his expansive spatial installations forms the core of Nicolai’s artistic approach.

Nicolai arranges initially disorganized sound waves into mediated experiences of image and sound. He takes as his material various sound frequencies, which complex, technical devices of his own conception produce and translate into form and sound. Like the phonograph – a predecessor of the record player, the invention of which, at the beginning of the nineteenth century, first enabled sounds to be reproduced, and which Rainer Maria Rilke described with tremendous fascination in his essay Ur-Geräusch (Primordial Sound, 1919) – Nicolai finds forms for the recording of and generation of tones from sound waves. The primordial sound that gives the exhibition its title does not indicate a primordial tone, so much as sound’s communicability and mediality.

A central work in the exhibition is crt mgn (2013), an installation that refers to the video-art pioneer Nam June Paik: images of neon tubes are recorded live and displayed on monitors where their images are distorted by an irregularly swinging magnet-pendulum. The resulting distortions of color and shape, together with audible disturbances in an electric circuit, create a literal tone-image.
While in crt mgn sequences of image and sound continually alter themselves in apparent relation with one another, other installations foreground the acoustic. Underlying Invertone, a space-encompassing sound installation first shown in 2007, is the phenomenon of the reciprocal neutralization of sound waves. White noise emerges from two loudspeakers positioned opposite each other. Although the noise fills the entire room, there is one location – the exact middle point between the two speakers – from which it cannot be heard, challenging the observer’s acoustic and spatial awareness.

This principle is also made tangible in the spatial installation static balance (also from 2007). Two large parabolic mirrors placed opposite each other generate sound-scenery that – like an acoustical map – allows one to perceive fields of heightened and reduced sound density. The visitor is prompted to move through the space, allowing him- or herself to be guided along these acoustical pathways.
As a compliment to these video and sound installations, which are primarily located on the lower floor, on the upper floor Carsten Nicolai shows an archive of sketches and notes that illustrate the development and realization of his works. The interplay between the classical architecture of the exhibition building and Nicolai’s high-tech, minimalist, elegant installations determines the basic character of the exhibition.

Carsten Nicolai (born 1965 in Chemnitz, lives in Chemnitz and Berlin) participated in documenta X. In 2001 he was awarded the Ars Electronica prize. In 2007 he received the Zurich Prize during his exhibition at the Haus Konstruktiv, together with the city of Zurich. That same year he was a beneficiary of the Villa Massimo grant in Rome. His works have been presented in several Venice Biennales, as well as in numerous international group exhibitions at venues including the Guggenheim Museum, New York; the Centre Pompidou, Paris; and Tate Modern, London. Numerous institutions have dedicated solo exhibitions to his work, among them SMAK, Ghent; the Schirn Kunsthalle, Frankfurt; the Hamburger Kunsthalle; the Musée d’Art Contemporain, Montreal; and the Museum für Moderne Kunst, Frankfurt.
www.kunstvereinbraunschweig.de