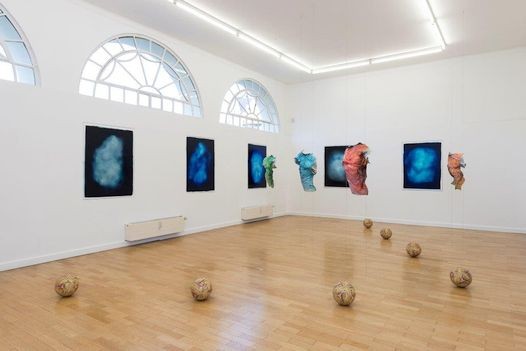 Telstar, the football developed by Adidas with black and white dots on a white ground, was first used during a television broadcast of the 1970 FIFA World Cup in Mexico. Because of its better visibility on black-and-white television, it established itself as the standard design for footballs. The fact that mass-media principles for the coverage of (sporting) events have a lasting influence not only on the tele-vised image but also on human perception is at the heart of Florian Auer’s installation You’re Live in the Remise at the Kunstverein Braunschweig. Examining the spectacle-oriented live broadcast of football matches from the perspective of Land Art, Auer constructed an exhibition architecture that plays with its own visions, revisions and supervisions.

The principle “not just on the sidelines but in the very thick of it”, which has characterised televised sports broadcasts for close to two decades, feigns interaction with the viewer. As they become ever more perfected through advances in digital technology, television broadcasts increasingly distance themselves from the objects they transmit: the broadcasted event still references an actually occur-ring reality, but now also generates something almost hyperreal. In keeping with this principle, Auer conceived new expansive works for the Braunschweig exhibition. Using the relationship between physical reality and its live transmission as a starting point for the examination of contemporary sculp-tural and painterly strategies and their potential, he employs imitation and exaggeration to create an anti-relational exhibition space that merely suggests the possibility of participation. Utilising the 1960s’ idea of “negative” sculpture, equally accessible and decisively characterised by its external perception, he makes his works oscillate between the second and third dimensions. The sculptural and object-like – placed in a space-defining picture plane – are consequentially “levelled”. Also integrated into the exhibition are paintings by Seth Pick (born 1985 in Reading, lives and works in Frankfurt am Main), made especially for the exhibition at Auer’s invitation and the first abstract compositions by the artist, who otherwise devotes himself to dream-like figurative subjects.

Florian Auer (born 1984 in Augsburg, lives in Berlin) studied at the Akademie der Bildenden Künste in Munich as well as at the Städelschule in Frankfurt am Main under Prof. Tobias Rehberger. He has had solo exhibitions at S.M.A.K. in Ghent (2013), Kraupa-Tuskany Zeidler in Berlin (2012, 2014) and NAK – Neuer Aachener Kunstverein in Aachen (2012). His works have also been presented in group exhibiti-ons, for example at the Westfälischer Kunstverein in Münster (2014), Lothringer 13_Laden in Munich (2013), the Museum für Moderne Kunst, MMK Zollamt in Frankfurt am Main and CCA, Andtrax (2012).
The exhibiton is supported by: Ministry for Science and Culture of Lower Saxony
www.kunstvereinbraunschweig.de