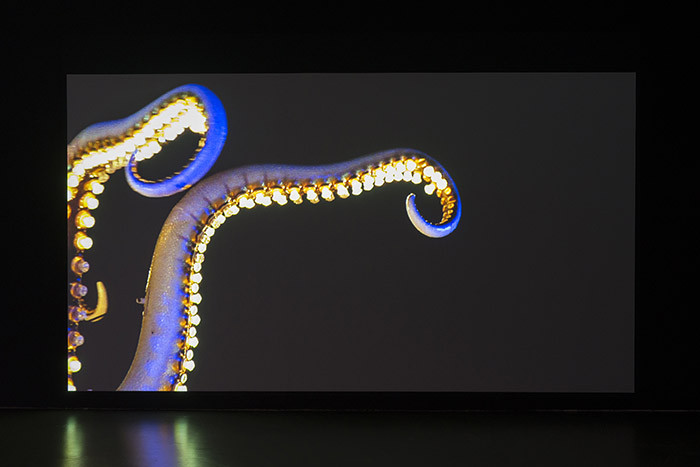 MECHANICALLY YOURS is Anna Franceschini’s (born 1979) first extensive exhibition in the German-speaking countries. Curated by Stephanie von Gelmini, the show brings together filmic pieces by the Italian artist dating from 2009 to 2015.

The exhibition space is turned into a stage for moving images that are presented in differing projection situations. Films, short and long loops in addition to filmic triptychs are cyclically consolidated into a spatial and temporal structure. The arrangement follows a complex score that is targeted at both the atmospheric interaction of the different pieces as well as enabling the possibility to concentrate on each individual work. In the process, motion and immobility, sound and silence, the mysterious and the banal in Franceschini’s pictorial world are interwoven.

Everyday things play the leading role in the artist’s films; objects and apparatuses but also spaces and processes. Her subjects, devoid of any and all conventional narrative structures, are isolated from their context and staged fragmented in camera close-ups. Objects or courses of action consequently become inexplicable, obstructing an unambiguous interpretation.

The camera’s eye following the ornaments of wallpaper patterns does not clarify the spatial situation or even the architectural circumstances under which the images were filmed; the procedures in a commercial laundry vanish behind an outwardly grotesque apparatus that blows hot air on the items of clothing, seemingly breathing life into them; the framing of the image of a flag waving in the wind causes an allusion to the place behind it, but the view is then covered up again a moment later. The fragment offers an incentive to imagine the “bigger picture” and to interpret the phenomenon in this sense.

Referencing the traditions of New Objectivity photography and the modernist experimental film of the 1950s and 1960s, it is this curious independent existence of things in which the filmic apparatus and the material and object quality of the filmed are mutually dependent that consequently produces significance – despite the lack of any narrative. Franceschini draws on 16mm as well as Super 8 film techniques that are now no longer employed in the production of cinematic images, although the analogue film material is converted to the immateriality of digital visual media over the course of her work process. As it is, her work veers thematically as well as in formal terms between the poles of materiality and the immaterial, joining the objective with the imagination.

The spectacular images from her piece Kunstschnee (Artificial Snow), which was produced especially for the exhibition, were filmed at the Jever Fun indoor ski centre at Neuss near Düsseldorf. The resulting filmic triptych is ambiguous about how ‘real’ the depicted scenes actually are. Supposed forces of nature and the threatening monumentality of technical apparatuses, the filmic representation that goes into detail and the simulation-based original location come into conflict with each other, almost hiding the fact that the hall is actually used as a leisure facility dedicated to winter sports.
www.kunstverein-duesseldorf.de