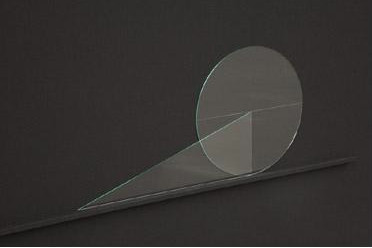 Characteristic for Florian Pumhösl's method of working is the questioning of the hierarchy between individual authorship and its source of supply, i.e. what he absorbs as a historic reference and what he himself is able to portray. There is initially no intrinsic distinction in value between what has been created, such as a picture, and its spatial and historical context.

At the centre of this exhibition in the Kunstverein für die Rheinlande und Westfalen is a twenty-four-part cycle of montages that the Vienna-based artist has been compiling since the end of 2008. It comprises black panels, each one of which is minimally inclined towards the wall, just enough so that the background of the painting can be used as a mount for one or several forms cut from glass. They adhere to a principle of montage in which form is understood to be a disposable and mobile entity, that is to say, not first and foremost a part of a fixed composition. The object of the typology undertaken by the artist here with his choice of formal themes is an approach to an idea of an abstract space that is broadly located in and around the field of modern set design, and which largely does without illusionistic technology. The working title of this series is Bewegliche Bühne (Movable Stage) which is divided up like abstract filmic cadres in four thematically linked sections.

Preceeding the cycle, there is a vitrine which Pumhösl has called Relief, with editions of a Japanese avant-garde magazine Teatro, designed and edited by Murayama Tomoyoshi in the 1930s. This work-unequivocally defined as a vehicle for historical material-introduces the cycle of glass montages, which does not in itself make any specific thematic or methodological references as such.

A film programme compiled by Pumhösl and with a commentary by the artist forms a separate contribution to this exhibition and will be screened on Sunday, May 23 at the Black Box. It comprises a selection of films compiled by Pumhösl as a kind of footnote on Alexander Rodchenko's painting Expressive Rhythm (1943-44). Commencing with Frank Gilbreth's Fatigue Study, the films share a common thread in which standardised and rhythmical movements play a pivotal role. Their thematic focus resides, among other things, in the psychological changes and conditions that obtain with industrial and visual automatization.