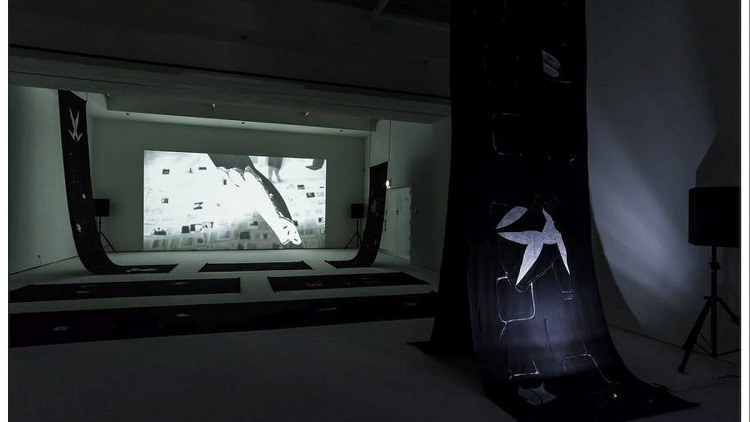 Kunstverein für die Rheinlande und Westfalen, Düsseldorf is pleased to present Lena Willikens & Sarah Szczesny’s Phantom Kino Ballett as a comprehensive exhibition. Their collaboration centers around a soundtrack comprised of music, film quotes, and interview excerpts, which is visualized through a video. According to the artists, the “Phantom Kino Ballett is sound fragment and black theatre, Holly Woodlawn’s nervous breakdowns, Taro ́s arpeggiated anime, Mario Montez ́ mobile, Maria Callas’ chiffre, and Anna Oppermann’s eyelashes.” Like an eternally morphing, anti-narrative cabinet of curiosities, the work is constantly being revised by Willikens & Szczesny. Individual audio and video sequences can thus be added, removed, or altered, and site-specific settings are created for each manifestation of the project.

Lena Willikens, who lives in Amsterdam, and Sarah Szczesny, currently based in Cologne, are both graduates of the Kunstakademie Düsseldorf. While Szczesny subsequently explored the possibilities for expanding the medium of painting into other fields of cultural production through her highly detailed and intricately fabricated works, Willikens has been internationally active as a DJ and producer since 2011. Parallel to their longstanding friendship, they have maintained an ongoing artistic exchange over the years. The joint production of music videos for Willikens ́ EP Phantom Delia (2015) and a shared interest in subcultural currents in music, art, and club culture served as the starting point for the Phantom Kino Ballett. As a collage of sound, video, performance, and installation, this cross-genre work combines painterly gestures and music executed by each artist with appropriated fragments of image, sound, and film.

Following performances and screenings in clubs, theaters, art venues, cinemas, and project spaces in Bregenz, Tokyo, Osaka, New York, San Francisco, and Montreal, among others, the Phantom Kino Ballett will be presented in Düsseldorf for the first time over a period of two months in an installation specifically developed for the exhibition. The Kunstverein will be temporarily transformed into a space for projection, staging, and production, which will be regularly activated by performances. In addition to Lena Willikens & Sarah Szczesny, other guests have been invited to enter into dialogue with the Phantom Kino Ballett — however, the bodies of the actors involved only appear as ephemeral uniformed mediums, whose movements animate the phantoms painted on their costumes.
www.kunstverein-duesseldorf.de