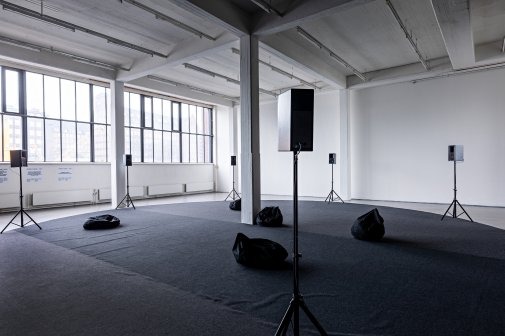 The experimental exhibition Corona Sound System foregrounds the experience of listening while changing the visual experience of an exhibition. What is the purpose of the exhibition space and/or what can the exhibition space do in the context of sound? In an empty room with white walls, within the functioning exhibition architecture, there are seats scattered at the required distance. Here a group exhibition will be held from 12 p.m. to 6 p.m. A radio play takes place next to a concert; minimalist tones are replaced by a baroque piece; the ambience of short pauses between pieces offers a moment to breathe deeply before getting involved in a new cosmos—just like in real life. These sounds are scattered in the room, one runs after another rather than side by side. We have to move back and forth between a total of five spaces that host these sounds—go there, linger, and then onto another place in the room, where the constellation of these sounds evokes new images from the last. Sound art can be experienced visually because it evokes different images in the mind of each individual visitor.

The exhibition Corona Sound System has no theme—except for concentrating on the different types of sound and their implicit possibilities.

Annika Kahrs and Wolfgang Tillmans both work in Hamburg. With her sound work My Favorite Music, Annika Kahrs deals with sound reinforcement and the acoustic appropriation of public spaces at Hamburg Hauptbahnhof. In 2001, areas of the main station began to be filled with classical ambient music in order to drive away people who slept or spent time there. She asks: whose private playlist do we hear at the train station? In Hamburg Süd / Nee IYaow eow eow Wolfgang Tillmans mixes the ambient noises of the Hauptbahnhof and the surroundings of the Kunstverein with the playfully extended singing of Billie Ray Martin and himself.

Nika Son, Robert Rehnig, Felix Kubin, C.W. Winter, Jakob Spengemann and Felix Kubin all have instensive and diverse practices in the field of sound. C.W. Winter recorded from his iPhone late at night at the Ruskin School of Art on High Street in Oxford, England—when the building was empty and the natural reverberation could be used in the school's neo-Gothic drawing room. Robert Rehnig's starting material was the high-resolution recording of a single note on a bass clarinet. Different textures of partial tones become audible in a variety of ways over time and thus demonstrate the richness of what is actually a very short sound event. Felix Kubin tried to send a last radio message with the Max Brand Synthesizer, a mixture of church organ and military machine. Nika Son fragments ambient noises and reconstructs them to create synthetic compositions that range from minimally abstract to rhythmically captivating. Jakob Spengemann asked eight people to imitate storm-like noises with their own voices.

Hanne Lippard works with language, just like Carola Ernst and Lucrecia Dalt. Lucrecia Dalt’s piece is about the appearance of a fictional character named Lia. In their appearance lies the premise that the inspiration for a work can arise from some form of obsession. Carola Ernst opens Sector C with the offensive word neutrality. Hanne Lippard's Life Is Full O'Surprises & Demises is a spoken text that prefers individual words and the manner of human vocalization over the logical structure of language.

But there is also work that specifically deals with the time of the Corona virus. Schwabinggrad Ballett & Arrivati ​​produced an audio installation especially for this exhibition, which composes positions, voices, myths and analyses from the global south and the social periphery. The Hamburg collective of cultural workers, activists, people of color and refugees discussed the pandemic with confidants from around the world. They ask questions like: what is actually more worrying than the virus? And why? Who is taking advantage of the virus? Who are the experts on the virus? What makes them experts? What will the new normal be? This is the starting point followed by other tones that send us in different directions to think or to be shaken. Melissa E. Logan's Pandemic Cacophony is made up of recordings that Logan made in different locations: during early morning hikes through Tryon Creek State Park in Portland; during midday violin improvisations with a neighbor of her parents; while visiting the Temporary Autonomous Zone in Seattle and participating in Black Lives Matter protests.

Graindelavoix / Björn Schmelzer Fumeux Fumée par Fume is a work of the Gothic style ars subtilior (subtle art) from the 14th century, a highly refined and complex form of secular chant. The text repeats variations of the word “fume” (smoke or steam) in a chromatic-musical mode and articulates an invisible circling and spreading of contaminating fumes. Holly Herndon and Mathew Dryhurst's Mimic is a work that was created in collaboration with Spawn, an AI unit that Herndon developed with Mathew Dryhurst and Jules LaPlace. Herndon and Dryhurst taught Spawn to receive sounds in order to then perform and interpret them. Tobias Euler, Thies Mynther and Veit Sprenger developed their project Moon Machine based on the work of the iconic street artist Moondog. Moondog (1916–1999), also known as the Viking of 6th Avenue (due to his Viking-inspired clothing), worked as a busker, mobile poet and instrument maker in both the US and Germany. In Enta Omri Mounira Al Solh repeatedly sings parts of the famous Egyptian song of the same name by Umm Kulthum (1898–1975) in various dialects and languages. Easily recognizable to most people in the Arab world regardless of their dialect, the song addresses heartbreak and the profound loss of traditional ways of life.