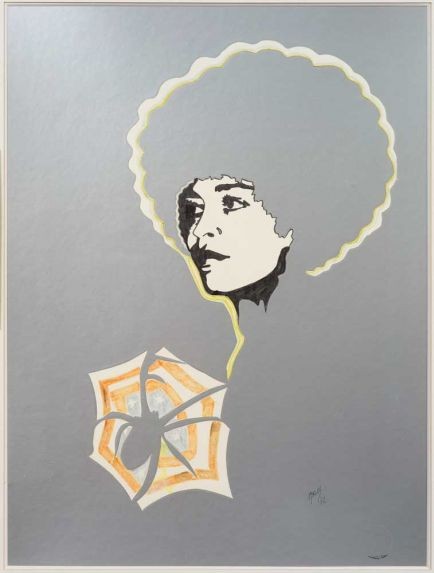 The work of Belgian pop artist Evelyne Axell (1935-1972) is currently experiencing a renaissance, appearing in major exhibitions at the Brooklyn Museum in New York, the Kunsthalle Wien in Vienna, and WIELS in Brussels. Axell’s work is rooted in the tradition of feminist pop art and nouveau réalisme, and her name is mentioned in the same breath as Dorothy Iannone, Niki de Saint Phalle and Sister Corita Kent. A former actress, presenter and screenwriter, Axell did not turn her attention to the fine arts until 1964. In the just seven years between then and her premature death she produced a large and diverse body of work. Axell concentrated primarily on gender stereotyping and the role of women, but also addressed contemporary political upheavals. Having started out in the traditional medium of painting, she soon moved on to using more unusual materials like aluminium and Plexiglas. For her numerous self-portraits she combined screen printing with graphic design techniques and created effects reminiscent of psychedelic art. The exhibition at the Kunstverein Hamburg brings together around 15 pieces that explore the politics and protest movements of the 60s and 70s. In doing so, it highlights an aspect of Axell’s work that has been largely neglected until now.
www.kunstverein.de