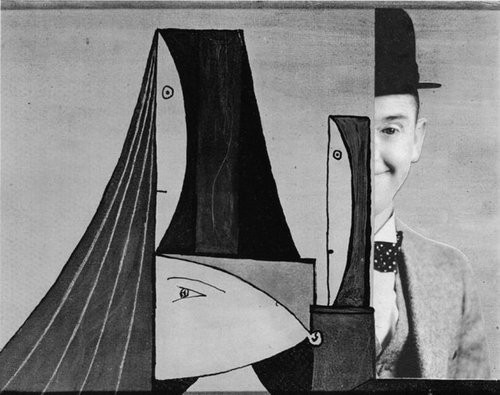 In his first institutional solo exhibition at the Kunstverein Hamburg, Hank Schmidt in der Beek (*1978, lives in Berlin) presents appr. 300 collages, for which he has drawn on the visual Library of Modern Art. He recombines well-known motifs of art history, transferring them to completely alien contexts. He takes a whimsical approach to the classics of modern art, less appropriation than a sort of caricature. He reduces well-known works of modern art history by Daniel Buren, Max Beckmann, Max Ernst, Man Ray, and Roy Lichtenstein to their essence. He is not concerned to treat these pictures with caution; he is not cowed by their standing. Indeed, he reinvests them with the light touch and wit they originally possessed before they were raised to the status of art history icons and obliged to bear this historical burden.

By combining different levels of image he produces new meanings, characterized by an inimitable, humorous aesthetic. When in the series “Yves Tanguy in the International Context,” for example, he has Laurel and Hardy put in an appearance with works by Frank Stella, René Magritte, and Valie Export, the two film characters almost seem to fit in. They parody the works by adopting attitudes or gestures, hiding in the pictorial arrangement or giving frowning expression to their lack of understanding.

In the series “An Act, Descending a Staircase” he refers clearly to Marcel Duchamp's cubist work “Nude Descending a Staircase” (an untranslatable play on the German word “Akt,” which can mean both “nude” and “act”). In the version by Hank Schmidt in der Beek, however, we see the artist duo Gilbert and George descending a stairway in several scenes. The accompanying quatrain opens an imaginary conversation between the two on the tribulations of taking the stairs. And naturally not in polished English but in the broad Bavarian in which almost all rhymes are written.

They provide background information on the collages, they replace the titles and open a new level of association. The poems by Hank Schmidt in der Beek tell a farcical tale, automatically pointing interpretation in a certain direction. Leaving aside any art historical interpretation, they offer a simple, seemingly perfectly logical explanation for the motif or composition. The two levels, the textual and the visual, closely interrelate, supplementing and expanding each other. Hank Schmidt in der Beek has used this principle in many small publications. In the context of the exhibition, a selection of these combined “Collages and Poems” is to appear in the form of an artist's book.
www.kunstverein.de