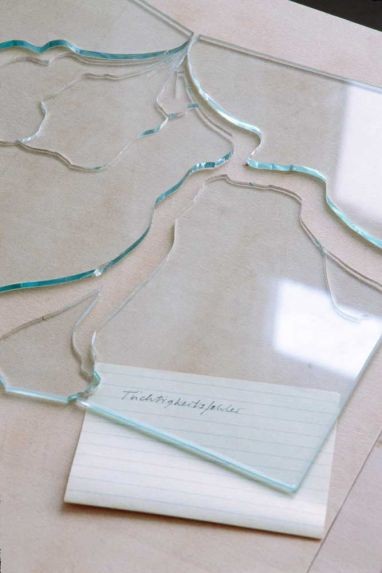 The works of Kathrin Sonntag (*1981, lives in Berlin) are like a protracted wink. We see everyday things over and again, and suddenly between a look, a blink, and the next look things shift, taking us aback. Sonntag's objects, photographs, slide series, and installations are concerned with perception and the dividing line between reality and fiction. In her works, an uncanny quality emanates from everyday objects in their very familiarity and subtle shifts in this familiarity.

The exhibition "Mühsam ernährt sich das Einhorn" at the Kunstverein Hamburg presents a new slide series of stationary and moving projections, a total of 87 slides dealing with slips of the tongue. The proverb that gives the show its title translates literally as "the squirrel earns a hard living," meaning "slow but steady." By a slip of the tongue the unicorn (Einhorn) replaces the squirrel (Eichhörnchen) as protagonist, disrupting the stock phrase.

Giving pictorial expression to slips of the tongue, Sonntag uncovers different levels of meaning; she takes the “non-sense” of the slip to extremes or opens the way to a different understanding. Because the snatches of text and proverbs are so self-evident and so familiar, it sometimes takes us a moment to realize that something is wrong. On post-its and scraps of paper they are casually set in relation to other material, superimposing themselves and taking possession, so that in the final pictures the arrangements sometimes produce connections, sometimes oppositions. With papers and other elements, the artist extends the different levels into the exhibition space.
www.kunstverein.de