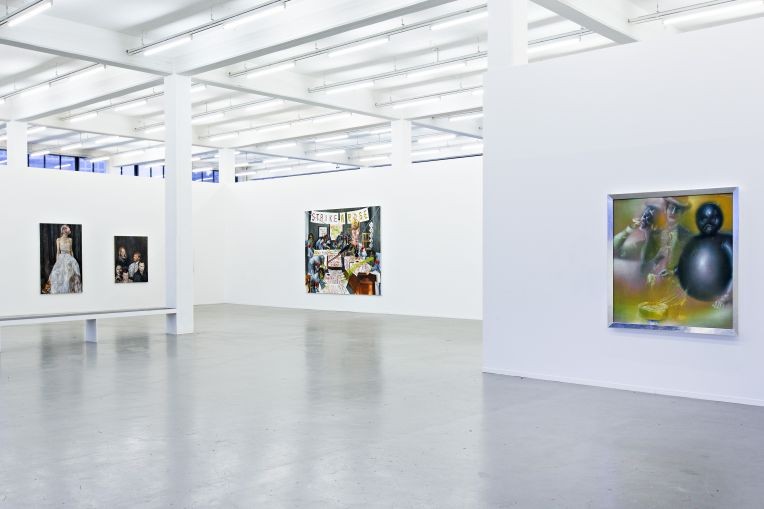 There is hardly any other art genre as heavily confronted with contradictions, prejudices and clichés as painting. Year after year, its end is proclaimed, while every three years its new energy is celebrated, and in the midst of all discussions, paintings achieve record-breaking prices at international art fairs and auctions, as if nothing ever happened. It seems like painting has become an anachronism of itself. In our fast moving and accumulative world, painting positions itself diametrically, for its process of updating requires long periods of time, dialogues with history, and feedback loops.

With the exhibition Malerei, böse (Painting, evil), the Kunstverein in Hamburg initiates a critical debate on painting’s subversive potential. The exhibition focuses on artworks using the medium’s manifold inscriptions to challenge aesthetical and moral concepts, using exaggeration, overload, kitsch, irony and violence, as well as a playful treatment of preconceptions. At first appearance these paintings may seem enticing, but on second sight they reveal an abyss. Some in large scale, others hardly bigger than a sheet of paper, either playful or serious, they all have one thing in common: they speak a distinct language which may offend the beholder.

This exhibition seeks to contrast the recent tendency of survey exhibitions circling around painting itself. Questions about what the medium is or still can be are dominant, instead of analyzing its actual contents. Lately, the theoretical discourse and exhibitions have created the impression as if there are deep insecurities in coping with the medium. The representation of contemporary painting seems to be stuck in a crisis – at least in context of institutional exhibitions.

There lies a special potential for subversion in painting as the most accessible art genre. As opposed to an installation, for example, a painting is not assumed to be complicated, per se. A picture is easily ascertainable for the human eye, as it does not require much movement in space and corresponds with our optical perception. Therefore the information supplied can be processed promptly. Based on this familiarity, we develop faith. We trust in not being attacked, startled or offended by painting.

And precisely that confidence provides ideal circumstances for the exhibited artist to create tension. The prematurely and inconsiderately developed faith of the spectator is consequently broken, undermined and frustrated. Thus, the artworks in the exhibition earn the adjective “evil” by ambushing us with their content. But evil has no quality in itself. It appears as a categorical attribution when we have absolutely no chance to sympathize with our vis-à-vis. However, the question is whether this objection is necessarily justified by a categorical moral instance. Aren’t we obliged to question our thinking, our acting and our ideas when confronted with the maximum divergence from everything we consider as “good”? In this moment of hesitation, the painting reveals its power. The artworks shown in the exhibition Malerei, böse (Painting, evil) compel us to questions our morals and beliefs. It becomes clear that all prevalent normative attributions and inscriptions reflect only our cultural convictions, which are highly debatable.

The exhibition is supported by the Ministry of Culture of the Free and Hanseatic City of Hamburg and Sylt Quelle.
www.kunstverein.de