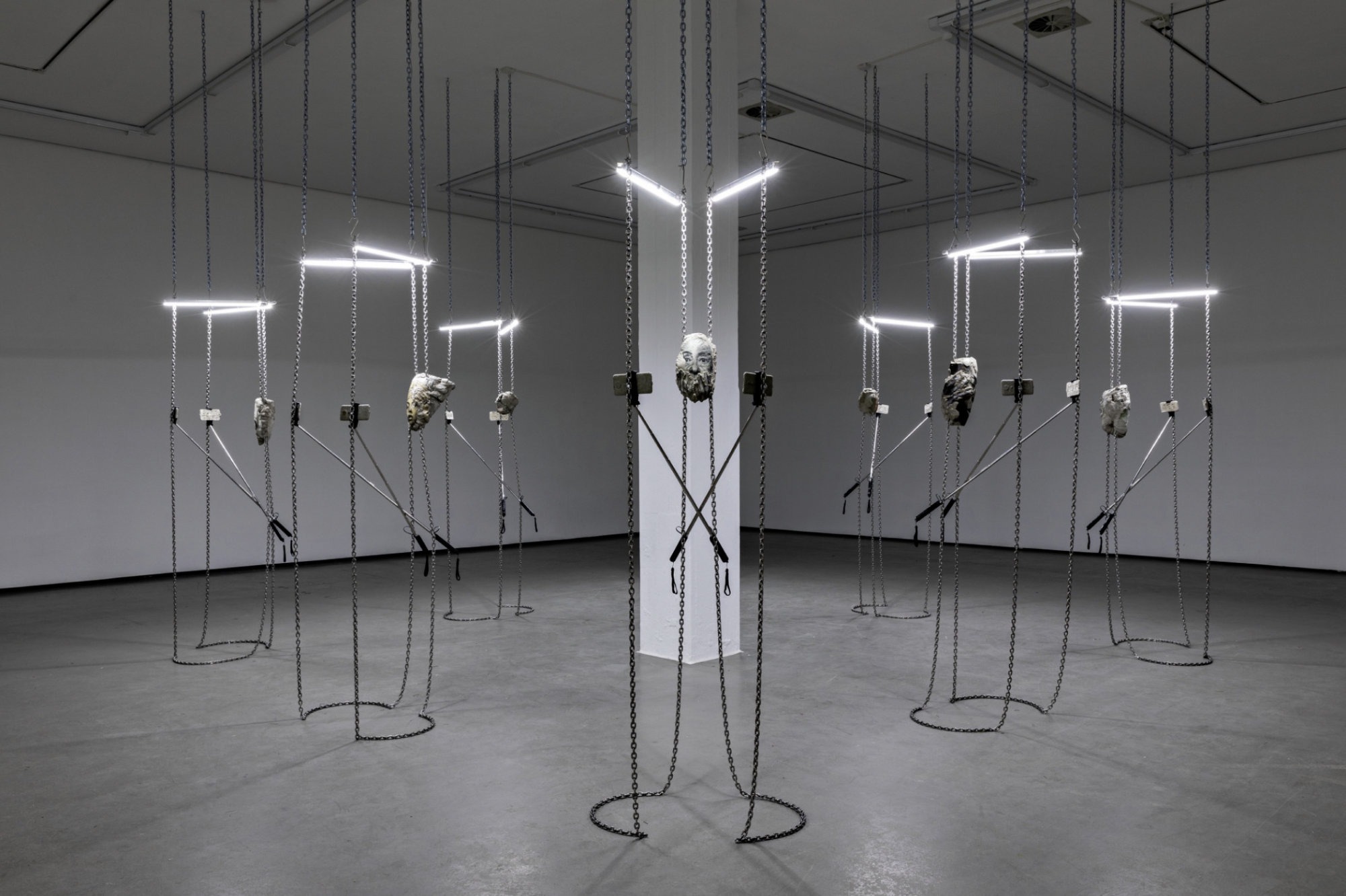 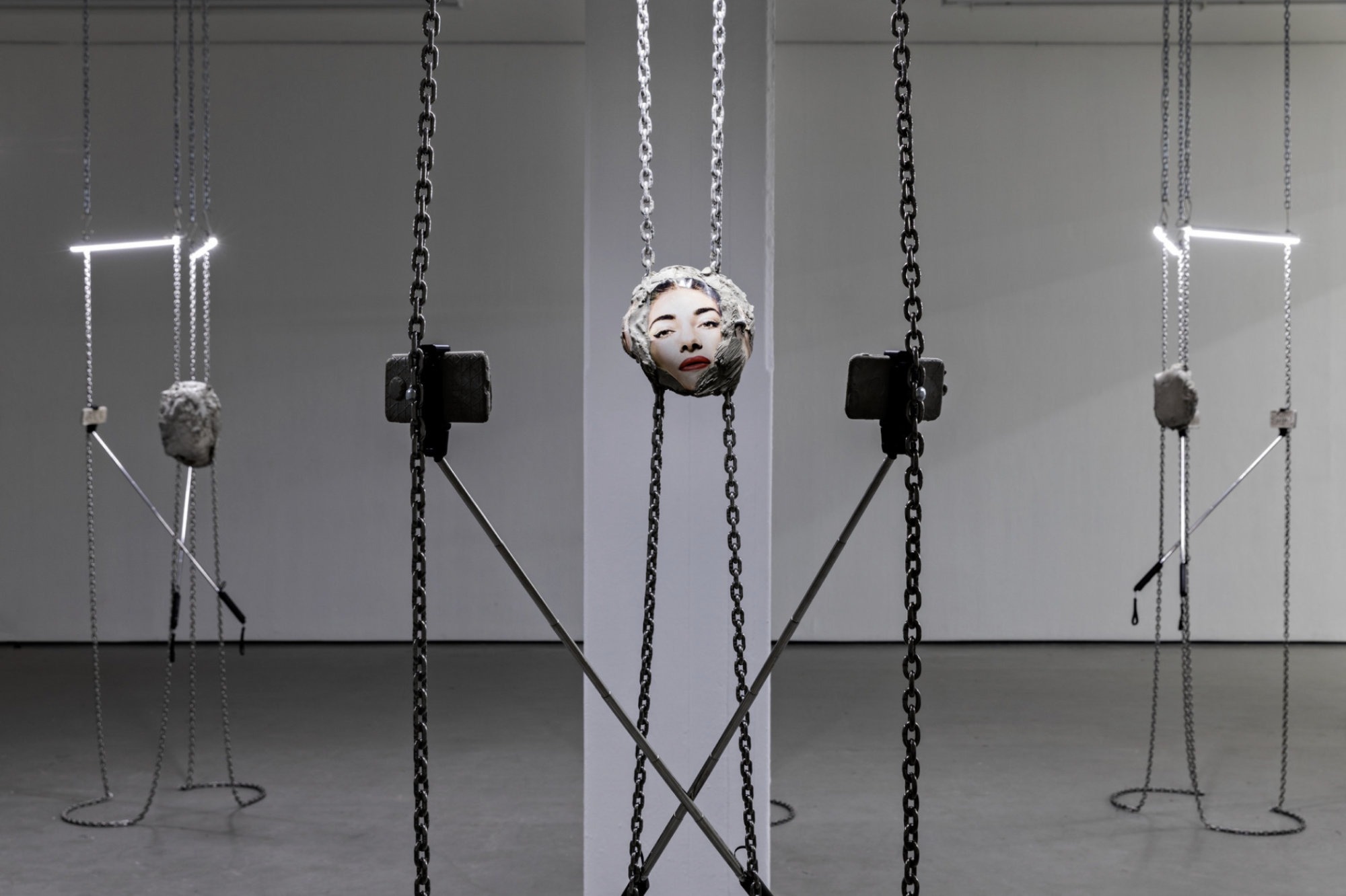 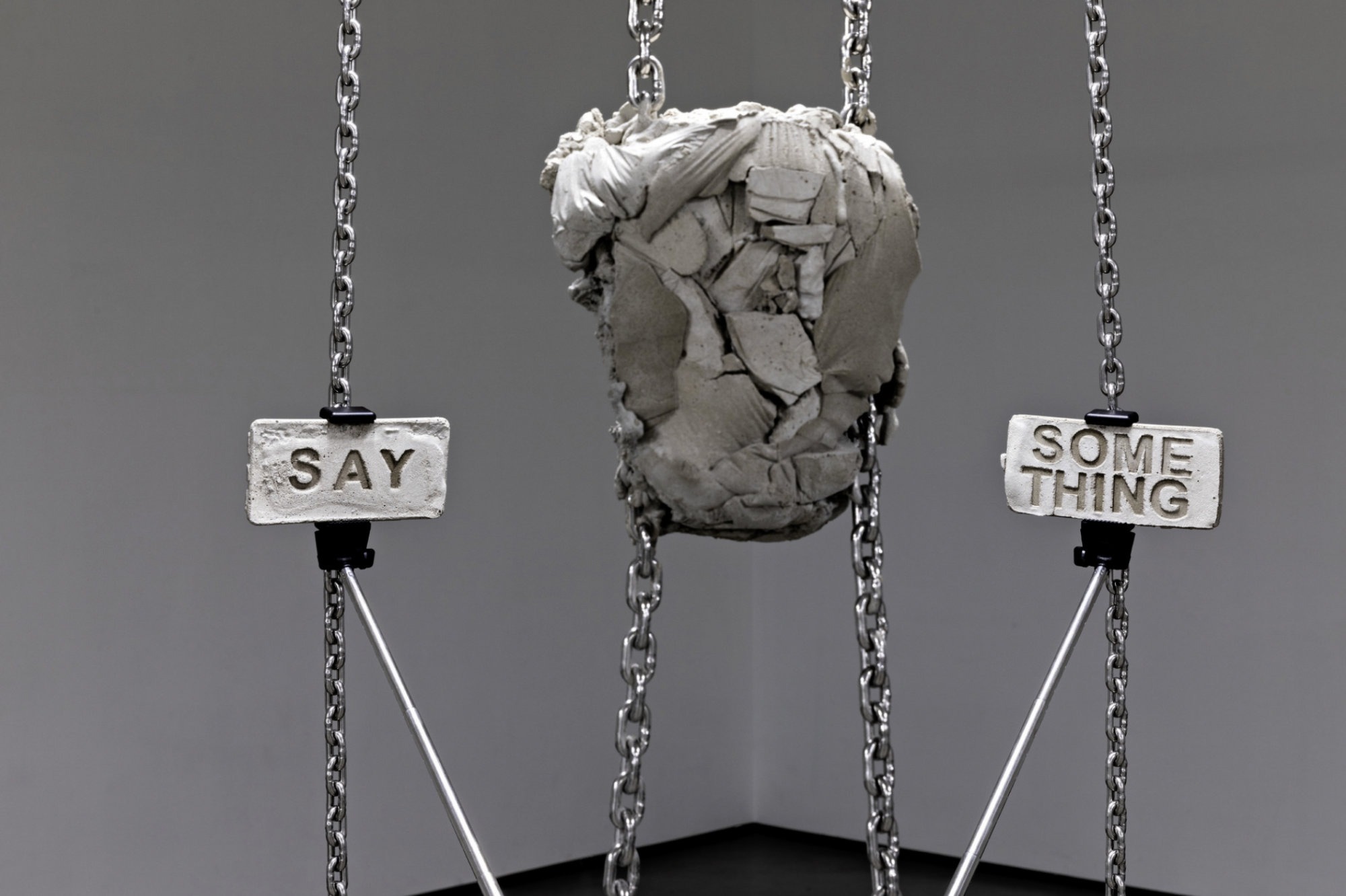 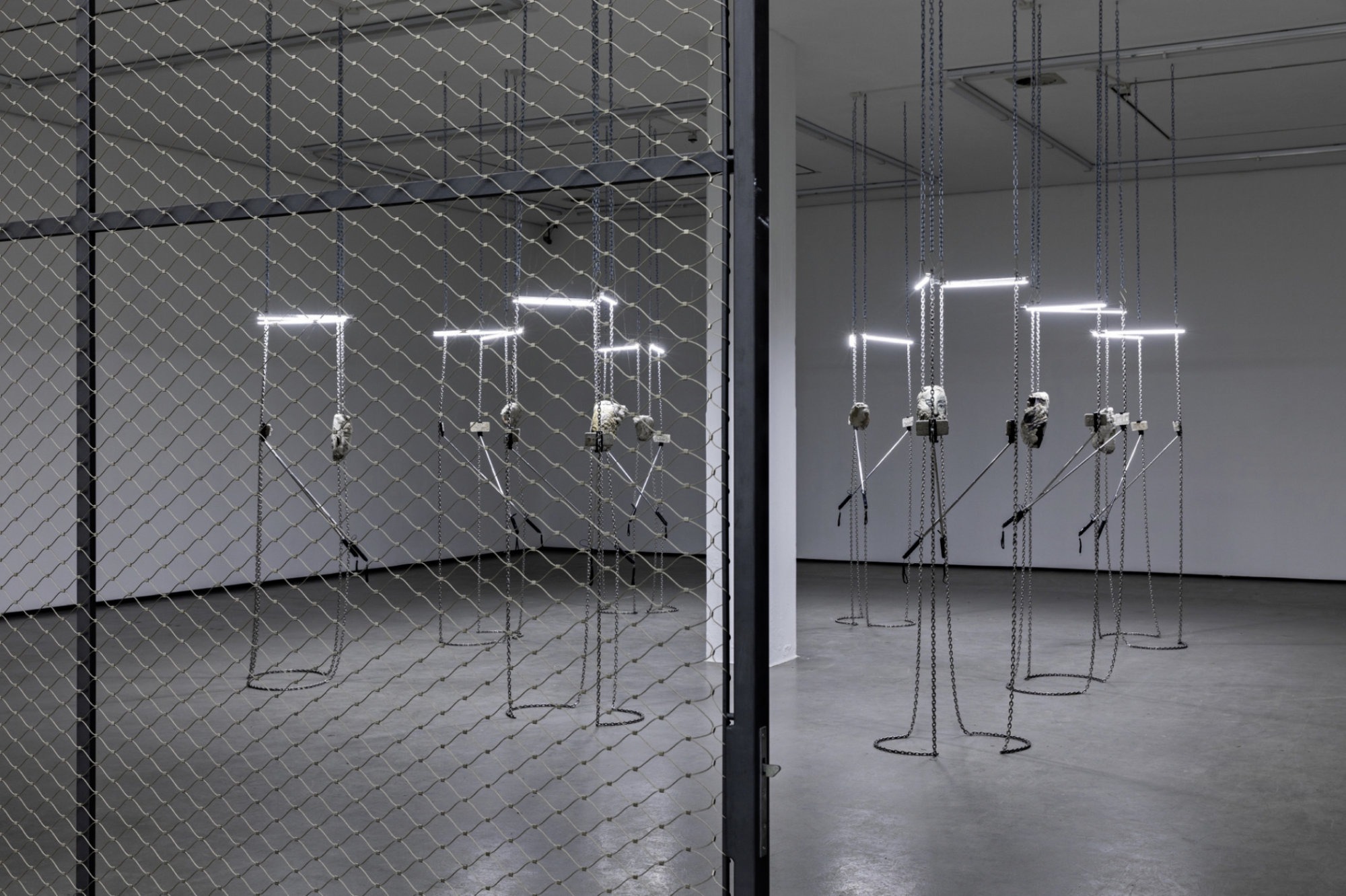 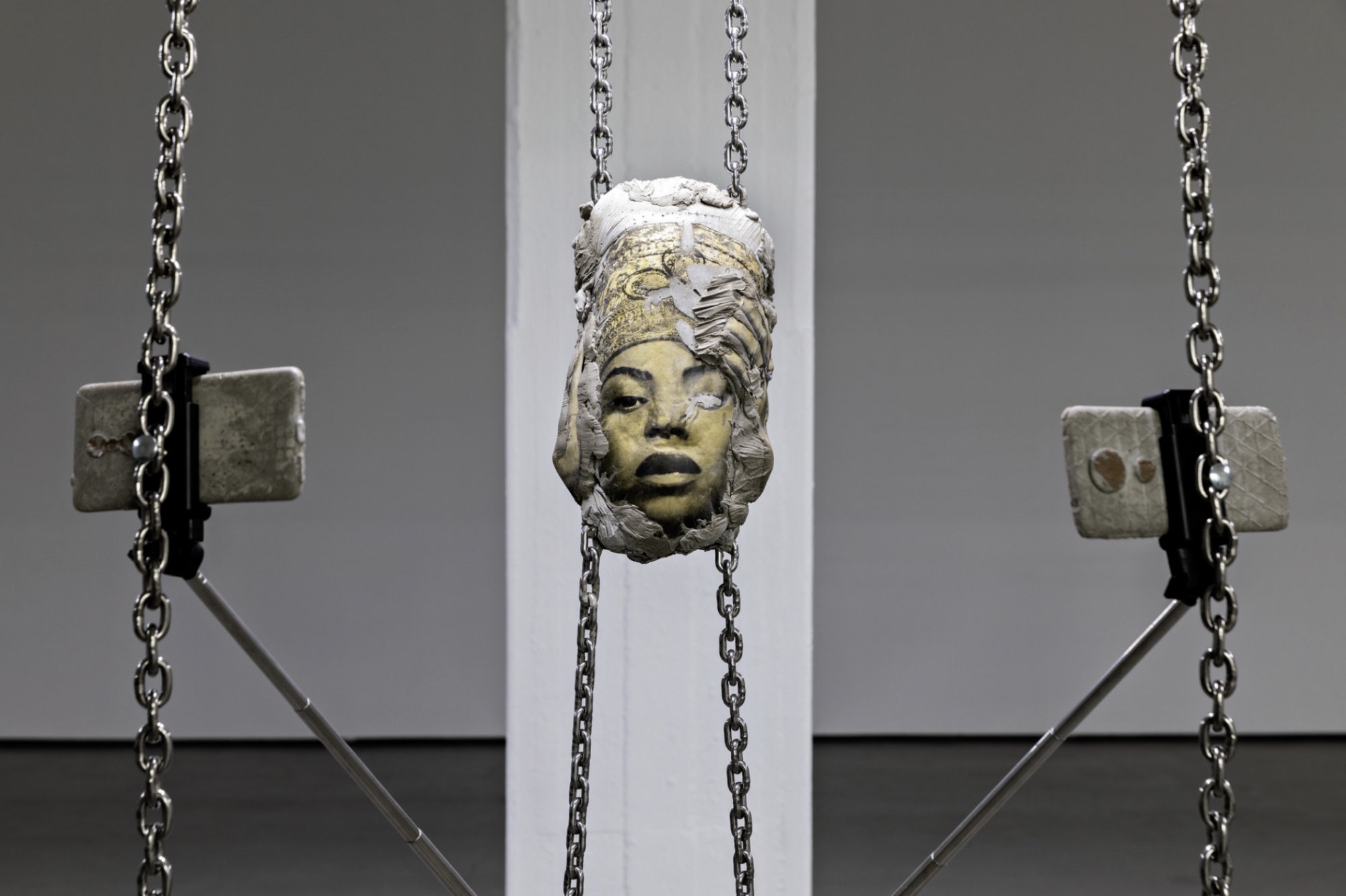 The examination of gesture plays a central role in Matheus Rocha Pitta’s work. As articulations of the body and language, gestures have far-reaching ethical and political implications. Over many years, Rocha Pitta has amassed an extensive archive of news clippings organized by quotidian gestural expression and place of origin. He arranges the material in multi-layered compositions on poured concrete slabs of different sizes and shapes. With his “petrified” collages, Rocha Pitta constructs stories, memories, and scenarios that reflect and resist different forms of authoritarianism, misinformation, exploitation, and injustice.

For his show in Hamburg, The Curfew Sirens, Rocha Pitta has developed a group of eight new sculptures called Sirens. The show’s title is already a play on the multiple semantic levels involved in the works. A siren is literally an alarm announcing the start of a curfew. “Curfew” is borrowed from old French and means “to cover” as well as “fire,” referring historically to a protective plate for putting out fire. It originated in a time when an evening bell would serve as a reminder to cover embers in the home to decrease the chance of cities catching on fire. On a textual level, Rocha Pitta consciously extends his Sirens to attributes shifting between state control and protective gestures.

This continues on a visual level: the foundations represent gestures of closed mouths, eyes, and ears, opening up a multiplicity of reference points. The artist plays, for example, with the three wise monkeys of a Japanese proverb, which would mainly be recognized today as emoticons used in text messages. In the West, the monkeys covering their mouths, ears, and eyes are primarily connected to the idea of not wanting to recognize something evil. Originally, they represented an ethics of not allowing oneself to be taught or spread inappropriate or poor behavior. The title of the works is a reference to Odysseus’ encounter with the eponymous chimera. He could only resist their fatally tantalizing, chanted promises of omniscience by having his crew tie him to the ship’s mast. Despite their arrangement around the main pillar in the exhibition space, it remains vague if it is not Rocha Pitta’s Sirens who are resisting in this story.

The artist likewise considers the selected gestures in relation to the urge for constant expression of opinion, communication, and streaming from social media and the Internet. In many societies, this is also mixed with an increasing surveillance mentality. Each Siren is holding two selfie sticks with stone cell phones on whose screens, in contradiction to the gestures on display, can be read “Hear Something!,” “See Something!,” and “Say Something!” An ambivalent action-reaction loop is thus developed within the work and with the audience as it remains questionable who is being challenged to hear, see, and speak.

In his works, Rocha Pitta purses the question of possibly short-circuiting the multi-level chain of power and language, the right of free speech, hate posting, and authoritarian control. Especially with its observations of how violence is increasingly being used to strengthen public discourse, the show searches for a moment of pause and balance.

Matheus Rocha Pitta (Tiradentes, 1980, lives and works in Berlin and Rio de Janeiro) studied history and philosophy at the Universidade Federal Fluminense, Niteról, and the University of the State of Rio de Janeiro in Rio de Janeiro. His work has been presented internationally in solo and group exhibitions, including at Auroras and Casa do Sertanista, São Paulo (2019, 2018), Museu de Arte Moderna and Athena Contemporânea in Rio de Janeiro (2018, 2017), Künstlerhaus Bethanien, Berlin (2017), where he was also grantee of the KfW Stiftung from 2016 to 2017, Brazilian Embassy in London (2016) and also Palais de Toyko, Paris (2013). He is represented in the collections of the Castelo de Rivoli, Turin, and the Museu de Arte Moderna in Bahia, Rio de Janeiro and São Paulo, among others.
www.kunstverein.de