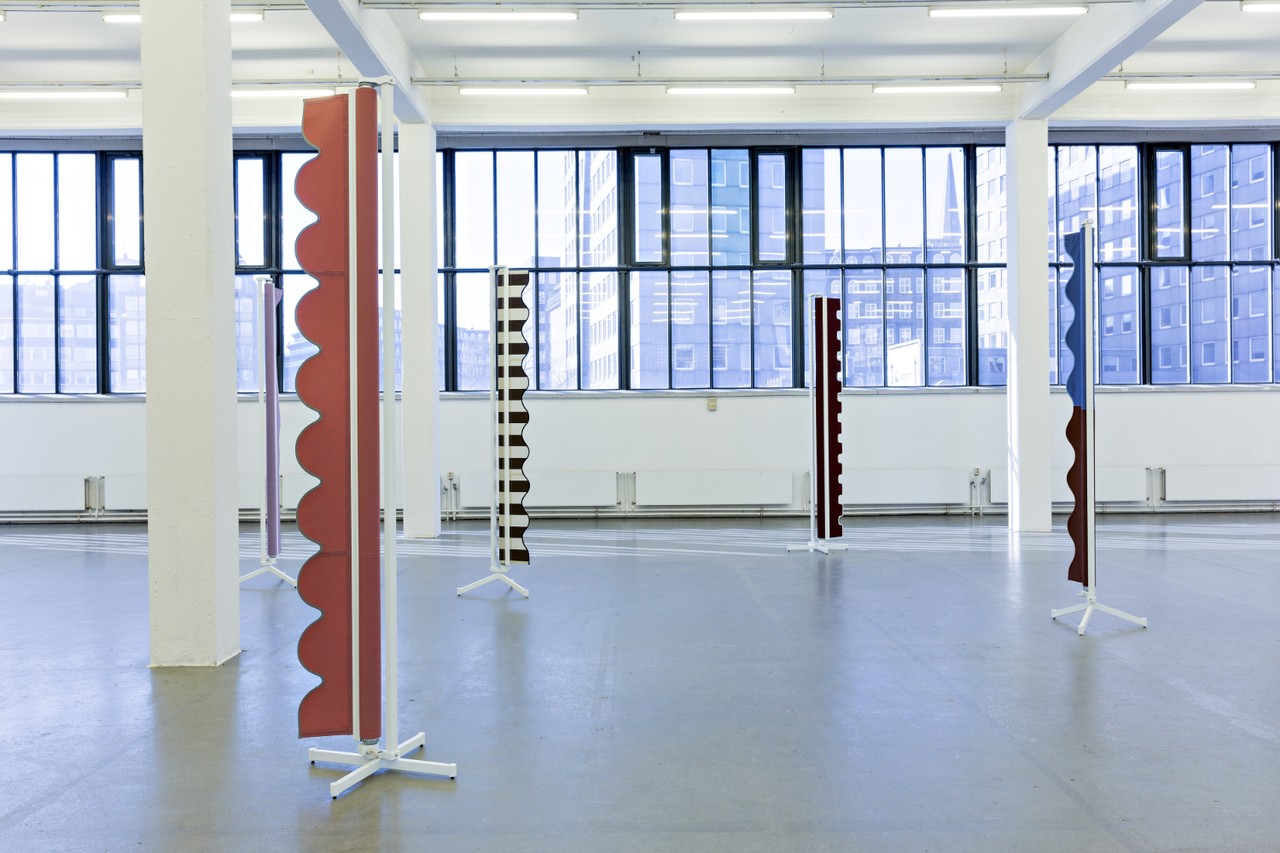 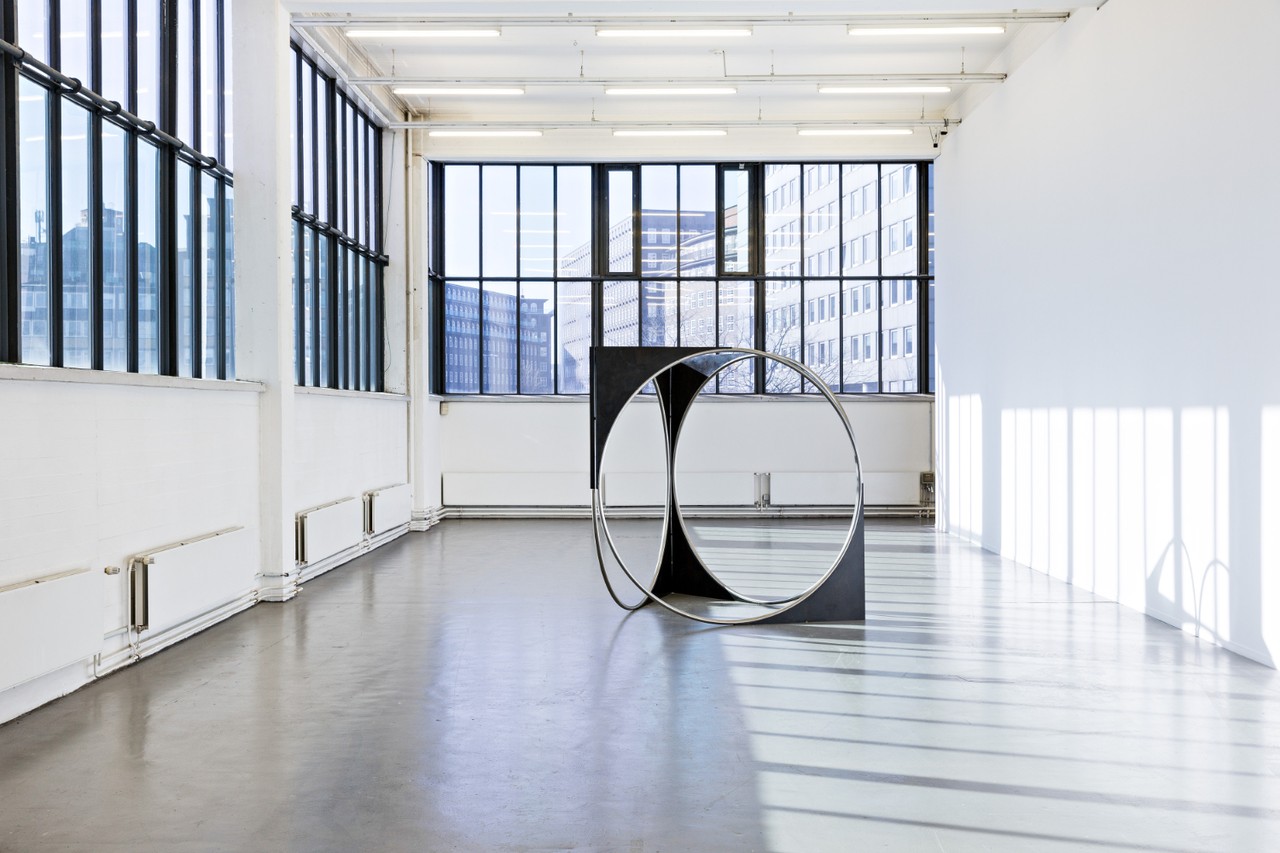 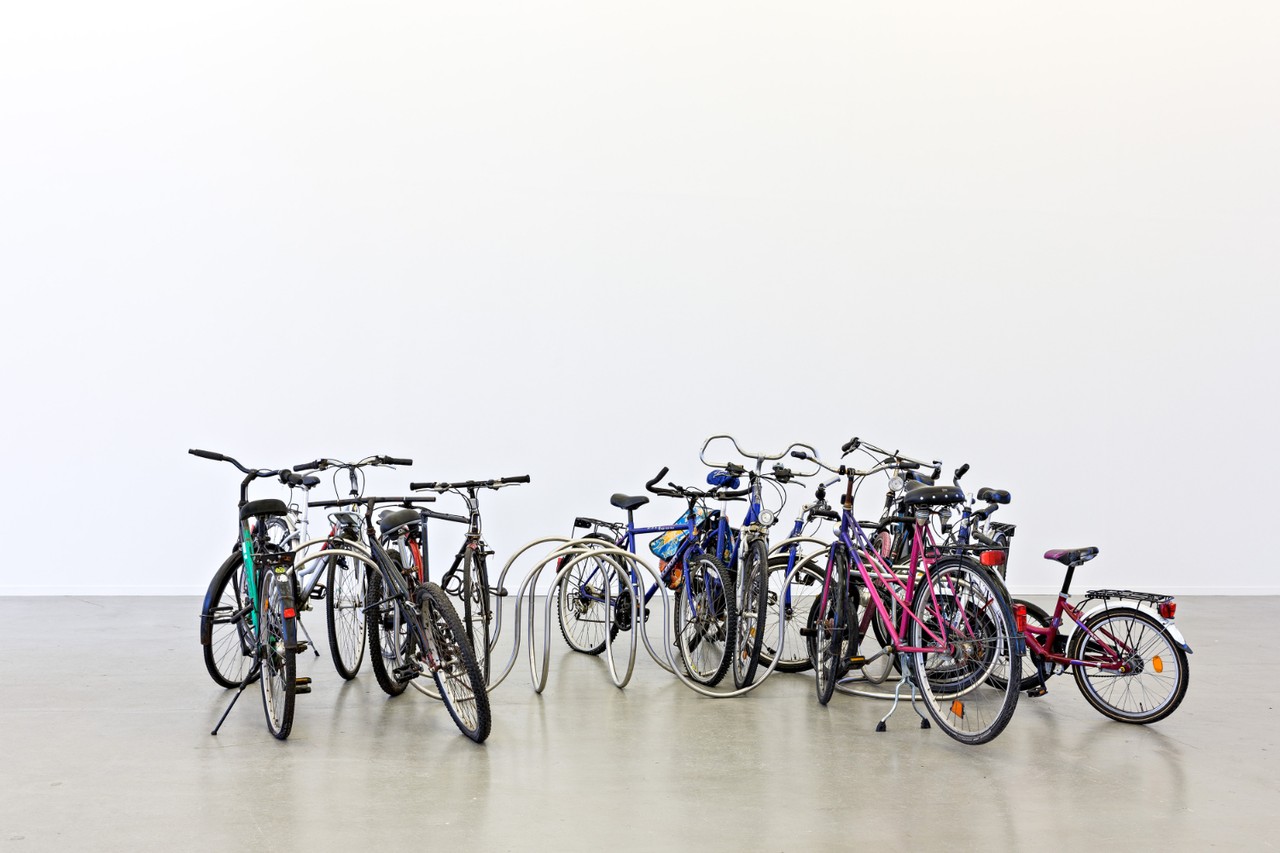 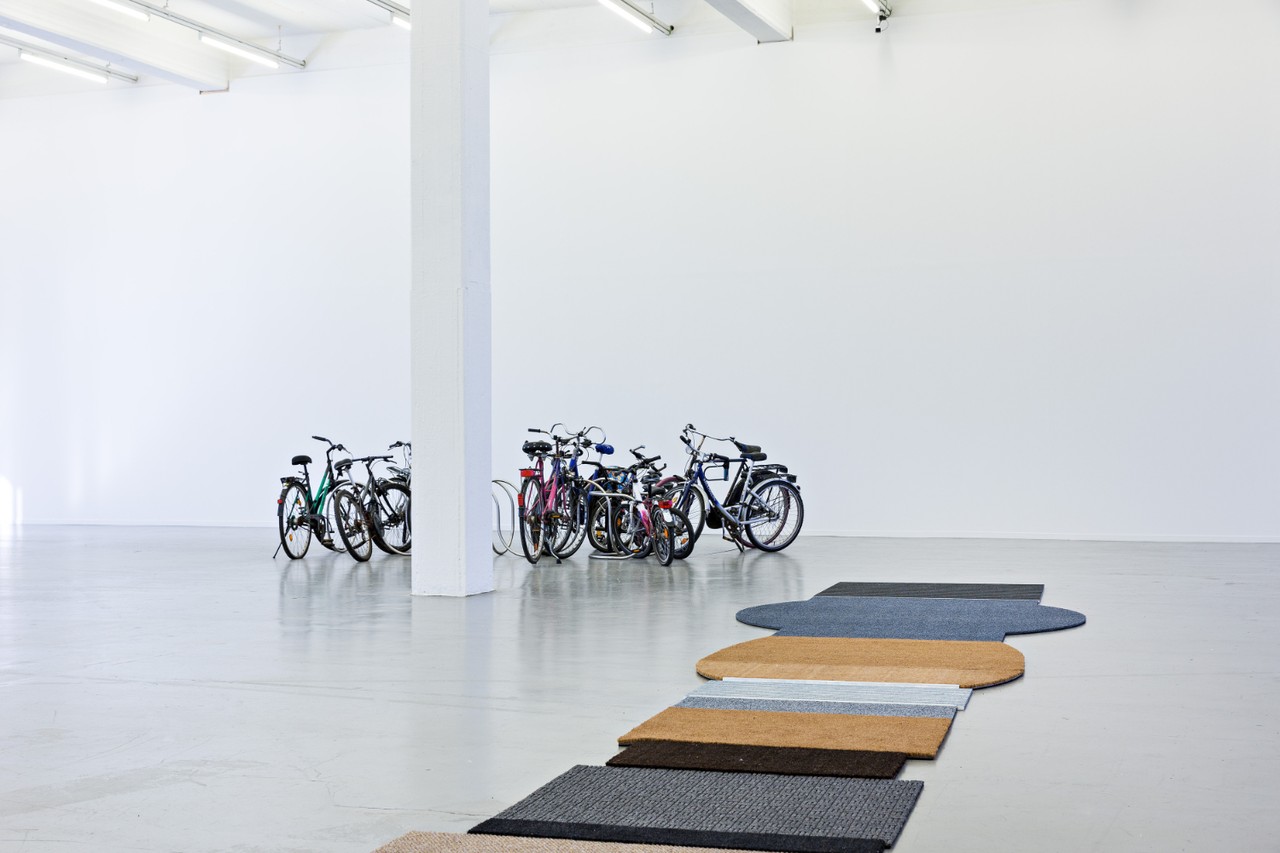 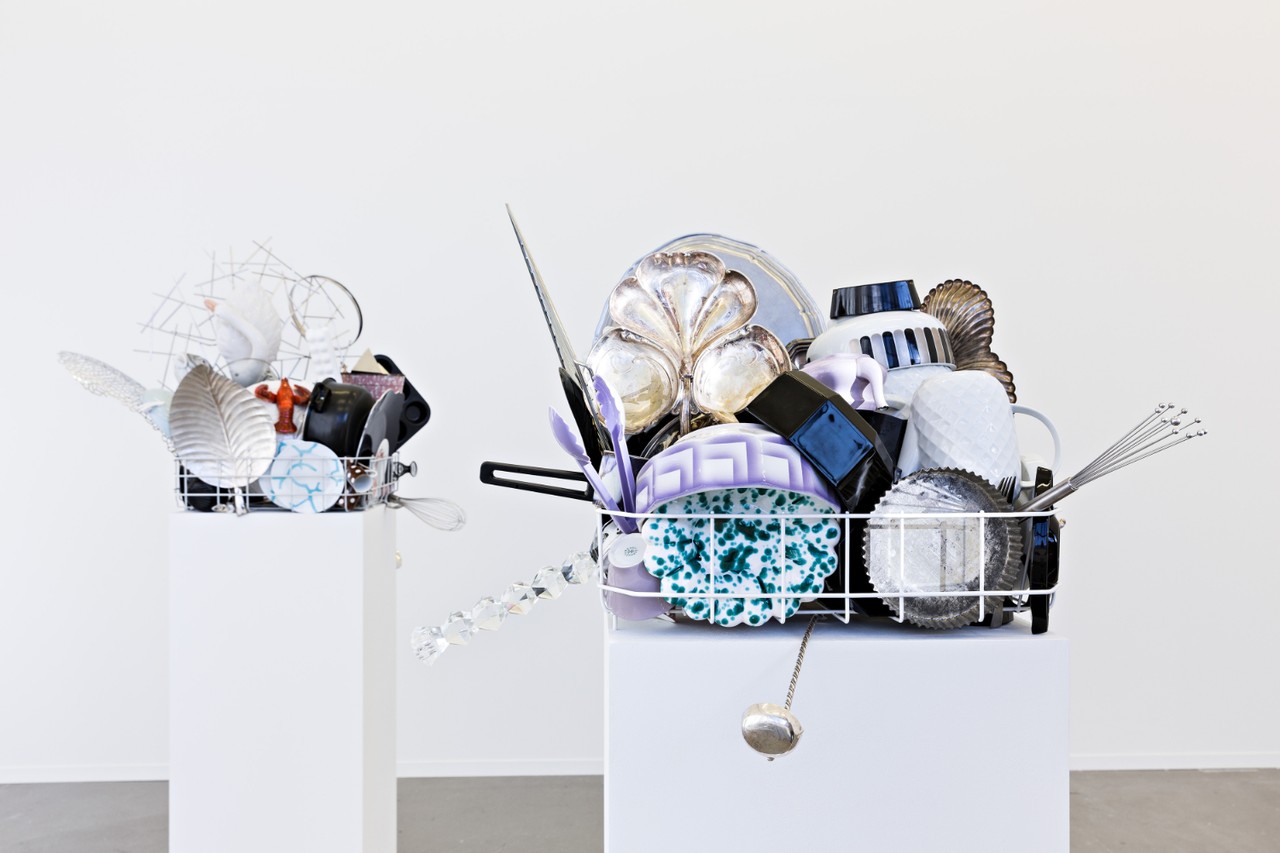 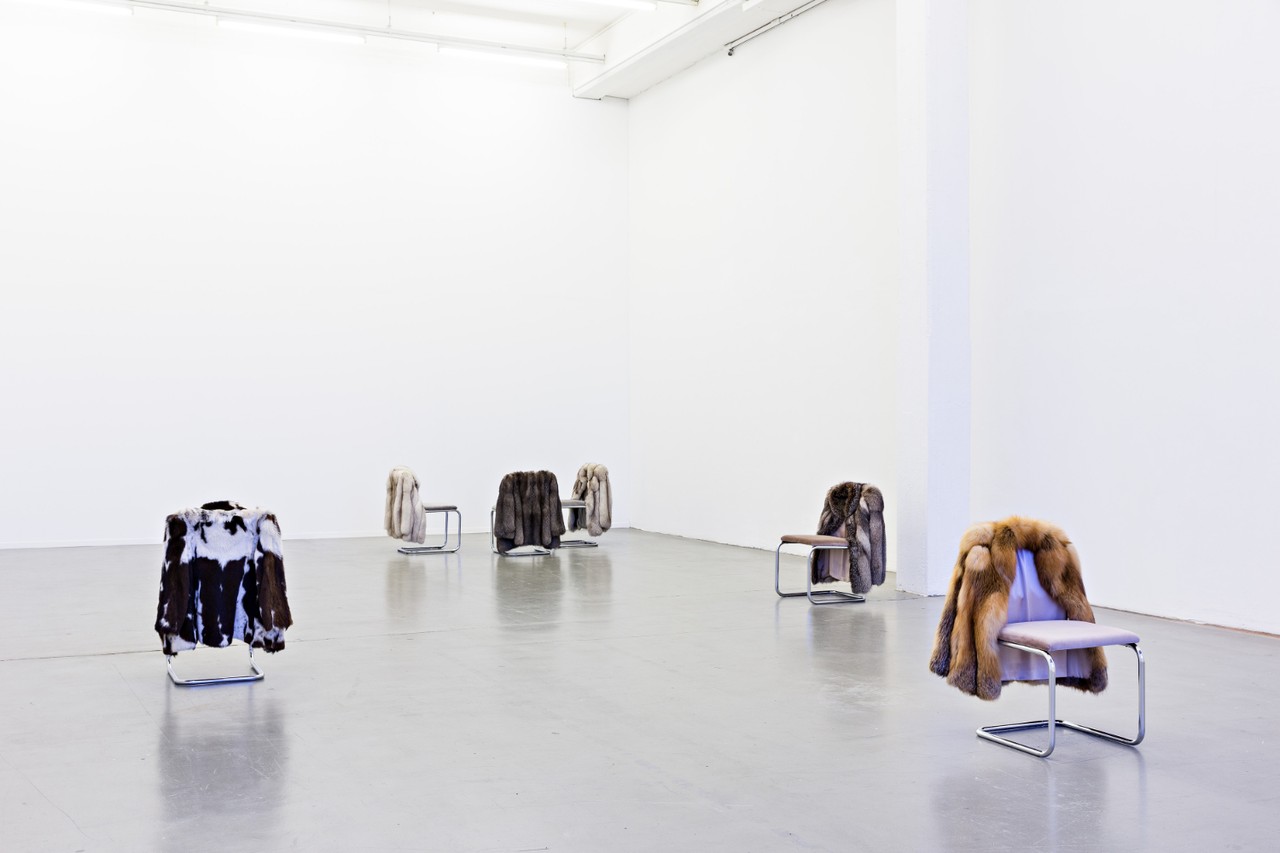 With Women Between Buildings, the Kunstverein in Hamburg presents the first survey exhibition of Nicole Wermers in Germany. The artist works in series of sculptures and creates worlds of objects drawn from mundane everyday design. Functional elements thus become ornaments of a sociopolitical and historical engagement with our immediate surroundings, based on the formal language of modernism or the urban space around us. Thoroughly designed urban space, in which all visual, haptic and audible features are strategically shaped, is characterized by affects. Wermers exposes precisely these stimulants and points to how humans are formed by aesthetic things. As Walter Benjamin described in 1928, things press too closely on human society. A distance needs to be created to understand how people are forced to function in the social system.

The show features pieces from the past ten years, including Untitled Chairs of the exhibition Infrastruktur which was nominated for the Turner Prize in 2015, as well as two new sculptures created especially for the Kunstverein.
The earliest work on display, the video Palisades (1998) produced during Wermers’ time in Hamburg, marks the start and simultaneously frames the content of the show. The artist appropriates semi-public spaces with the camera held upside down, giving the impression of walking on the ceiling. Hotels, corporate lobbies and the CCH Hamburg become enigmatic, interchangeable, endless architectures, whose functionless details appear as abstract sculptures or ornaments.

The series Vertical Awnings (2016)—formally referencing Brâncuși —are sculptures made of long rolls of fabric which have been repurposed to stand upright in the gallery space. Textiles are often used to subdivide, appropriate, privatize, shade, domesticate, or even generate public space. Their suitability for this purpose has to do with their material properties (textiles are flexible, permeable and stretchable), and also with the way we perceive them as harmless and unthreatening. A textile border always appears negotiable.

Wermers’ wall works titled Mood Boards (2016)— are misappropriated, foldable, diaper- changing tables from public toilets that create practical surfaces in close quarters. The artist cast different-colored terrazzo into them. Floor, traditionally at the low end of the architectural canon of values, is raised to the level of the display. Architectural hierarchies as well as historical and contemporary features of public space are newly blended and undermine customary patterns of behavior. As with the Mood Boards, the Dishwashing Sculptures (2013-17) are adapted ready-mades that play with degrees of function and misappropriation, but in this case transferred to the domestic environment. In precarious assemblages of pots, porcelain and kitchen devices stacked as if to dry, architectural ambition and daring statics form a contrast to female-connoted reproductive labour.

Wermers’ engagement with our thoroughly designed life-worlds, can be read as a ‘counter- aestheticization’. The artist calls for participating in the materiality and surfaces through which public and private, urban and commodity-cultural, architectural and media-related spaces and environments are defined.

Women Between Buildings, the title of the show, alludes to the standard work on urban planning, Life between Buildings by the Danish author Jan Gehl from the 1970s, in which he writes about the responsibility of urban planning and describes transit and communication zones as indispensable for establishing a community. But Wermers focuses on the reality of commodified urban transit spaces, where concepts such as community are associated more with the ad campaign of an insurance company.

A comprehensive publication on the exhibition with texts by Sabeth Buchmann, Kerstin Stakemeier and David Bussel will be published in cooperation with Compagnia and Motto Books.

Nicole Wermers (*1971 in Emsdetten, lives and works in London) studied at the HFBK Hamburg under Sigmar Polke and Claus Böhmler and at Central Saint Martins College in London. In addition to numerous other awards she was nominated in 2015 for the Turner Prize.
www.kunstverein.de