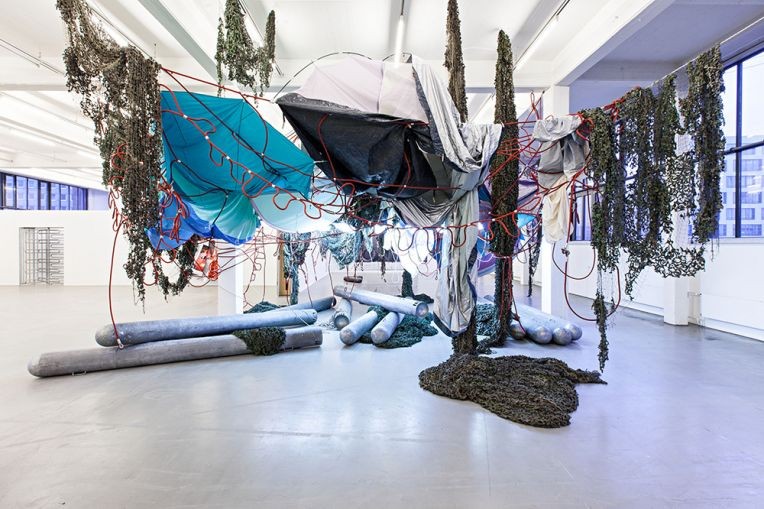 In a major general exhibition, Kunstverein Hamburg is to pay tribute to three decades of artistic production by Olaf Metzel (*1952, lives in Munich). Entitled "Gegenwartsgesellschaft" (Contemporary Society), the show brings visitors face to face with a collection of carefully selected pieces, which examine German themes and various aspects of German history. Metzel himself describes his works as "three-dimensional images, tenses". He succeeds in giving shape to time, while never losing sight of the historical context. The exhibition at the Kunstverein is for this reason not a retrospective, but rather an installative route through German themes and preoccupations, which today remain as relevant as ever.

Installed centrally in the anterior area of the exhibition hall, the work "Noch Fragen?" (1998/2013) denies visitors a sweeping view across the exhibition. At the same time, the piece serves as a form of provocation: a leading question, which hints at how Metzel’s works should be understood. Baseball bats have been incorporated into the tightly-stretched lengths of fabric, which with their camouflage motif were originally used by the armed forces, yet today form part of the stylish uniform of the urban guerilla. The baseball bats themselves reference both conflicts amongst football hooligans, while also bringing to mind the violent neo-Nazis.

The work "Im Grünen" (1992) is a further three-dimensional installation, which, with its amalgamation of climbing and camouflage nets, tents and street lamps, brings to mind the trend of vacationing in crisis zones. Relaxing in holiday resorts or hotel complexes cut off from the surrounding area has been failing for some time to scratch the itch for unique, unrepeatable vacation experiences. There is pressure to use the precious free weeks each year for ever more exotic and dangerous ends: Even vacations must comply with the criteria of an economized society. For this reason, the sculpture is combined with the work "Turbokapitalismus" from 1999. This term, originally describes an unfettered market, a ruthless capitalism, which further demarcates the borders between the rich and poor. Metzel’s protest against the ever increasing influence and effects of these developments is embodied by the sculptures "Utopia" and "Trübe Tage" (both 2013). These two works, formed from aluminum plates which have been bent and printed, grapple with media reports which reference, for example, the recent treatment of Greece and the Occupy movement. Time and again it is newspaper reports which serve as the motivation for Metzel’s works and thus it is but logical that he has been known to work with newspaper pages themselves. The work "Wurfeisen und Zwille (Entwurf Hafenstrasse)" from 1990/91 was created as a direct comment upon the squatting movement in Hamburg’s Hafenstrasse and also serves to emphasize that the Occupy movement does not necessarily represent a new form of urban protest movement.

In the rearward portion of the exhibition hall visitors must pass through the 1991 installation "Drehkreuz" before they can access the piece "Sammelstelle"(1992/2013). The space, covered in its entirety with sheets of galvanized corrugated iron appears to be completely mangled in some areas, something which could be taken to infer targeted violence or the creeping vandalism of public spaces.

It is precisely these confrontations in and with public (and media) spaces which have acquainted the wider public with Olaf Metzel and his works. Two works in the exhibition, entitled "13.4.1981" and "Stammheim" are particularly representative of Metzel’s works in this respect and are presented as prototypes within the scope of this debate. The former, developed for the Berlin Skulpturenbulevard in 1987, consists of a several meters high pile of enlarged safety barriers and shopping carts. The title of the sculpture refers to the events of the night April 12, 1981, when violent riots broke out in Berlin following the spread of a false report on the death of an RAF detainee. The sculpture, discussed in public media circles almost as hotly as the events themselves, does not take sides but functions rather as a representative for many societal confrontations which were held publicly.

The second work, "Stammheim", was created in 1984 for the Württembergischer Kunstverein in Stuttgart and is displayed in the exhibition hall in the form of a wall-size photograph, which serves to emphasize the aspect of installation. The work, which consists of a concrete crown of leaves leaning against a wall upon which the titular word is scrawled, refers to the occurrences in the eponymous prison. This is the location where the members of the Red Army Faction were held on trial and where Baader, Ensslin and Rasper were found dead in 1977. Today, more than 30 years after these events, the work’s association with the RAF has weakened; instead it serves as a warning against a surveillance state. The 1987 work "Idealmodell PK/90" likewise looks at the monopoly of violence enjoyed by the state. A monstrously enlarged gun (resembling the model used by the police at the time) was originally on display in the gardens of the Federal Chancellery. In so doing, Metzel was throwing at the feet of the state the very instrument used to secure its power, even against its own people.

The earliest work in the exhibition, "Roter Beton", made in the year 1981, is also being exhibited outside of its original place of conception, an empty apartment in Berlin. This work was a reaction to the violent death of a Berlin squatter. Red concrete was poured over a bent iron form and then worked over with an angle grinder until a figure emerged, seemingly on the run. The most recent work, "Sozialtapete", is however, utterly unique to its place of installation and has in fact been incorporated into the wall itself. After the exhibition ends, it will be removed and no longer exist in the same form.
www.kunstverein.de