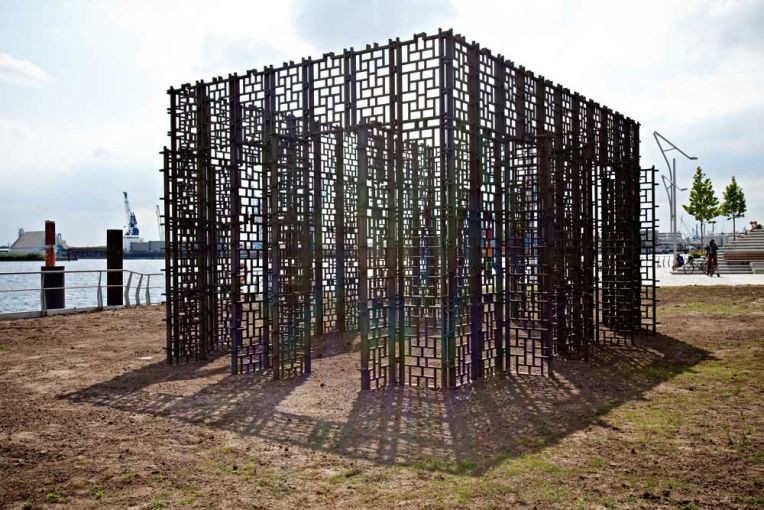 From 18 June 2011, the Bulgarian artist Plamen Dejanoff (* 1970, lives in Vienna) will be realising the bronze sculpture "The Bronze Horse" in public space. The outside façade of the architectural design is composed of caste bronze modules measuring 95 x 65 x 10 cm. In Hamburg the artist is showing some 150 elements that compose an open pavilion 7.8 x 5.4 m in area and 3.9 m high.

For many years, Dejanoff has been planning and developing "The Bronze House" for his home town in Bulgaria, Veliko Tarnovo. In the city centre, Dejanoff has acquired a number of building sites on which he is erecting house sculptures of bronze. They are being arduously constructed by hand in separate elements, so that since 2006 progress on the first of five planned building sculptures, which will in total cover 600 square metres, has been advancing in various stages of production and in cooperation with various exhibition venues. With the five planned “Bronze Houses,” Dejanoff will be creating a special domain in Veliko Tarnovo for societal, artistic, and cultural activities, which, given the lack of infrastructure in the past, are likely to be unaccustomed. The creation of the bronze sculptures is not the only challenge: another will be the possibility and invitation to make accessible and usable platforms of them.

Dejanoff is now launching a first field experiment with the Kunstverein in the context of the project "Art and Culture in the HafenCity." "The Bronze House" will be making a stopover prior to and in parallel with his exhibition in the Kunstverein Hamburg (October 1, 2011 - January 1, 2012). Considering the invitations extended to three Hamburg institutions—Deichtorhallen Hamburg, Kampnagel und Kunstverein Hamburg—to realise art projects as satellites in the HafenCity Hamburg that address the intermediate zone of critical-artistic activity and city marketing, as well as the confrontation between architecture and urban planning, which has to be faced in the HafenCity, there is clearly much common ground between Dejanoff's work and the "Art and Culture in the HafenCity" project.

"The Bronze House"—erected on the site between the Hamburg Cruise Center and the Unilever Building—will hence be a new, temporary building. The walk-in sculpture will be both a satellite of the future house in Veliko Tarnovo and a satellite of the Kunstverein. The (still) empty envelope points to the function of architecture, but also to a relationship between inside and outside, to space and its use.
www.kunstverein.de