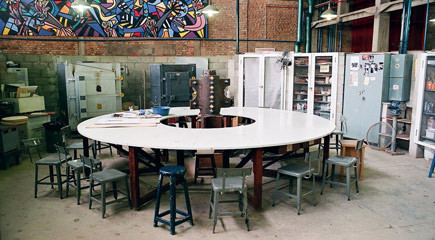 The notion of affinity has increasingly gained significance in contemporary social movements that underline self-organised and non-hierarchical models of public assembly. Group Affinity aims to examine and negotiate this form of public-alliance where definitions of social and cultural significance are constructed and interacted with by the people who share and support them – and to extend it as a model for mutual learning, communal living and emerging artistic and cultural production.

In the form of a two-week summer school and a four-week exhibition, Group Affinity offers a diverse curriculum of five participatory faculties run by international collectives in the field of art and design: Chicago Boys While We Were Singing, They Were Dreaming, Grand Openings, Cinenova, Andreas Müller & Susanne Pietsch and Slavs and Tatars. Despite the fact, that each collective works with a different method of research and action, the project has given them common ground, whereupon their practices accommodate inter-subjective alliance as a primary condition in their public strategy. As such, the summer school provides a pretext to pursue this common interest within a broad range of experiences and opinions on the notion of how collective agency is formed.

In addition, the summer school can be seen as an educative premonition against the backdrop of today’s neo-liberal influence on European cultural politics and in particular its demands for culture to be measurable and profitable. Group Affinity seeks an alternative. It opts for creating a space for critical inquiries, heterogeneous alliances and the negotiation of differences.

A group of international and local participants, all selected by the faculties from an open call, gathers in Munich for the first two weeks of August. This shared time will be divided into a private and a public part. During the daytime, the participants and faculties concentrate on mutual research and learning processes, that will include fieldwork within the social, cultural and historical context of Munich. On workdays from 8pm onwards, the faculties will host public evening classes with presentations, guest expert-lectures, performances and screenings. These evening classes are an open invitation for the general public to stay informed of the development of the working groups and participate with feedback and expand upon the notion of affinity. All these meetings will be held at the Kunstverein München.

The academy and exhibition will be accompanied by a publication designed and developed by Berlin based graphic designer Manuel Raeder. For Group Affinity, Raeder has especially developed a mobile architectural structure for the space and its furniture, based on his long time research into communal architecture of Brazilian architect Lina Bo Bardi.