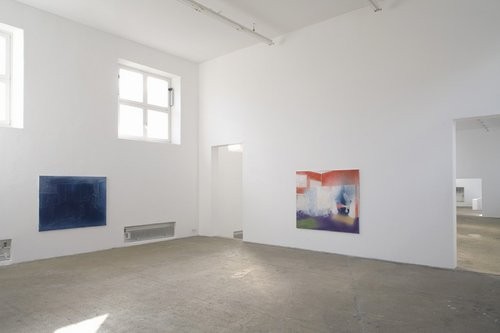 Kunstverein München is happy to present the solo-show Many many women by London-based painter Silke Otto-Knapp (*1970, Osnabrück). The exhibition focuses on Otto-Knapp's most recent body of work, exploring the different facets in which the artist combines a historic pictorial syntax with her interest in staged spaces, scenarios and gestures.

Otto-Knapp investigates how the 'culture' of painting might be situated within a wider notion of shared culture: for instance in the abstract language of modern dance, the spatial staging of formal gardens or theatrical interiors and designs.

The exhibition Many many women takes its title from an essay by Gertrude Stein (1874-1946). In 1927/28 Stein collaborated with composer Virgil Thomson on an opera called 'Four Saints in Three Acts' which was first staged in 1934 with an all black cast. Sets and costumes were designed by the painter and poet Florine Stettheimer (1871 – 1944), who also features prominently in a number of Silke Otto-Knapp’s recent paintings.
The exhibition Many many women will bring together paintings that depict very different scenes, characters and constellations, not following a particular plot, biography or chronology. Using layers of watercolour and gouache on canvas, figures and backdrops emerge and define the pictorial space, while exploring the settings in which women have appeared and performed throughout the history of modernity.

Many many women is part of a series of collateral exhibitions in Munich, entitled ‘Farbe Bekennen’, which all dedicate themselves to the subject of painting.