How The Tangible Shapes The Mind 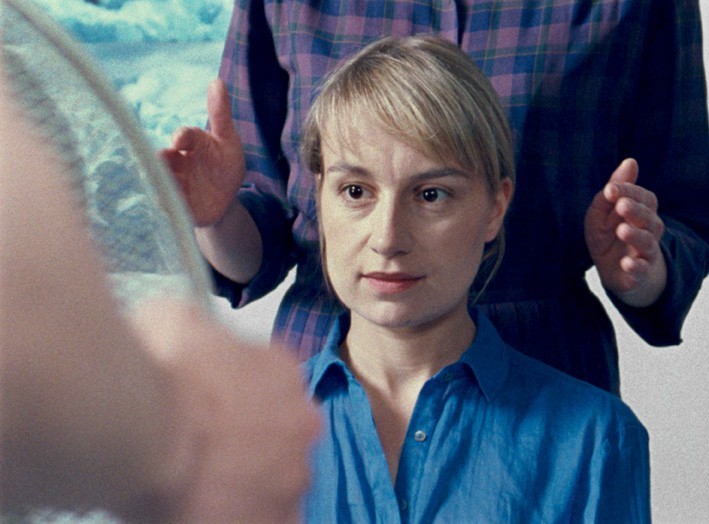 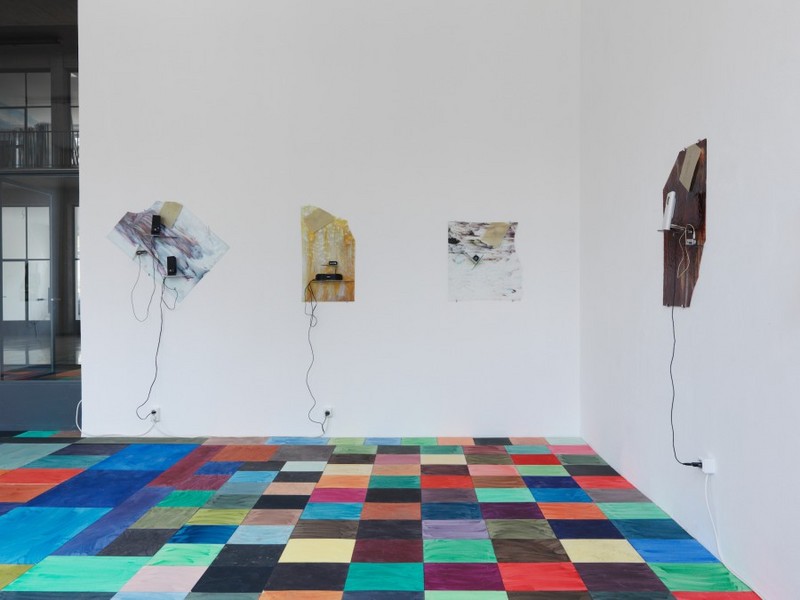 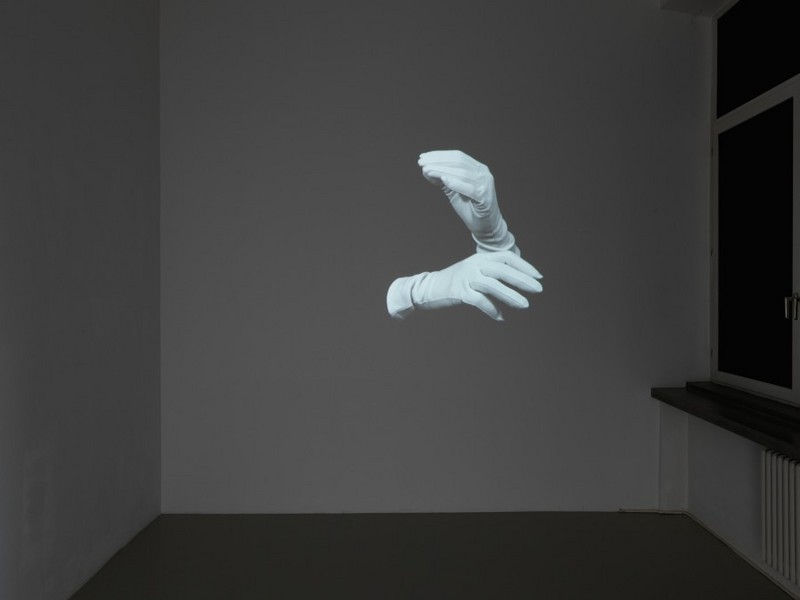 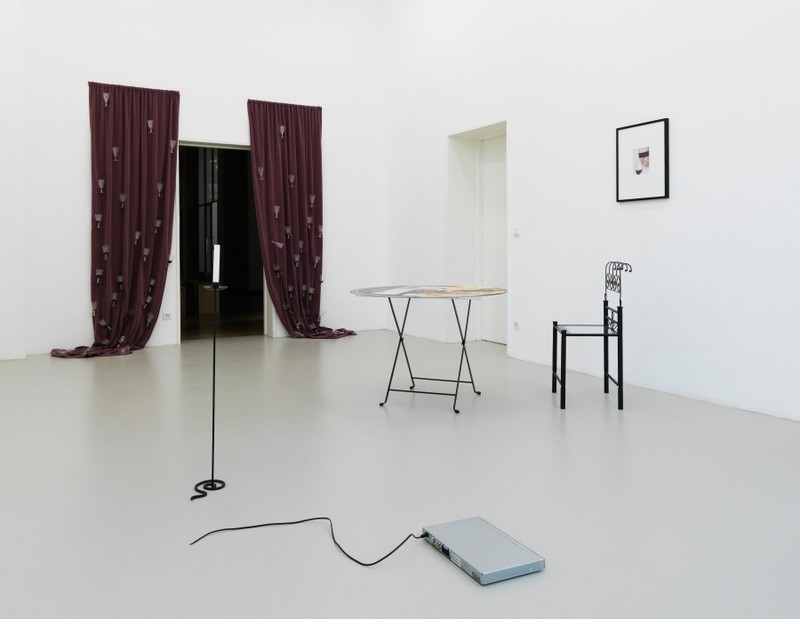 How the Tangible Shapes the Mind engages with an analytical view of human perception, taking as its focus of inquiry the cognitive and sensorial capability of human beings. Varying modes of direction and shifts of perspective within the exhibition aim to investigate the nature of seeing and its connection with haptic perception.

An exploration of sensorial experience is undertaken through works dealing with laboratory analyses of synesthesia (Daria Martin), translations of language into physical structures (Natalie Häusler) and settings in which presented objects point to gaps in cognition (Timothy Davies, Pauline M’barek). In their works, the artists evidence an affinity for the medium of film as well as to outmoded electronic technologies and equipment, analyzing the time course of modern technology and reflecting how these developments come to be inscribed in our collective memory. Their works dismantle any obvious hierarchy of the senses and employ various artistic methods to transform the eye itself into an organ of touch. Through material and narrative breaks the processes of recognition and recollection are activated and become linked with the memories of haptic recognition of objects and surfaces.

The structure of human cognition has become an increasingly important field of study within scientific disciplines like neurology, psychology, computing technology/ artificial intelligence or philosophy. The analyses of the human senses – the processing and filtering of external stimuli – not only prompts conclusions on social behavior, but also takes center stage of socio-politically and economically motivated causes, in order to improve the shape of our nearby environment as well as to optimize our life with new products (e.g. multi-sensory marketing). At the same time, new technologies continue to privilege visual perception, which is the dominant vehicle for legitimization and recognition within the natural sciences. Linked to this, the exhibition scrutinizes how technology influences our experience of the world – for example, how cinematic and digital images shape our consciousness, and how the tangibility of objects and products remains important within our daily life.

Daria Martin (b. 1973, San Francisco, USA; lives in London)
The American artist Daria Martin works on carefully produced 16mm-films, which are often the result of detailed research and dialogue with scientists and cultural theorists. In addition to references to cultural history and the relation between human beings and technology, a key recurring issue in her work is the dynamic between the “pleasure in looking” and “to-be-looked-at“. In her cinematic images the subjectobject-relationship moves back and forth between voyeuristic and autonomous gazes. Underlining the haptic quality of the 16mm frame, the sequences condense into visual interplays between the actions of the protagonists and the tactile surfaces of objects. These various textures make the spectator aware of his own perception and empathic capability in front of the machine-projected moving images.
At the Kunstverein Nürnberg, Daria Martin displays her most recent film Sensorium Tests, produced in 2012 and presented at the renowned art institution MK Gallery in Milton Keynes, UK and Galeria Stadtpark in Krems, Austria. Set-up as a scientific experiment, the work is linked with her 2006 film Soft Materials, which was recorded with two dancers and self-learning robots at the Artificial Intelligence Lab of the University of Zurich. For Sensorium Tests, Martin undertook research on the neurophysiological phenomenon of Mirror-Touch-Synesthesia. A person affected by this particular form of synesthesia experiences the sensation of touch while observing another person or object being touched – the same sensation on the respective part of her own body; this vicarious touch emerges from a coupling of the neural areas associated with tactile and visual sense in the brain. Based on the first documented clinical experiment with a Mirror-Touch-Synesthete, the film depicts a staged laboratory test: a woman is asked to state the difference between an experienced touch on her own body and the observed touch of different objects, and finally, another person. In addition to various people in the room, the test subject is observed by two researchers behind a one-way-mirror. As the experiment progresses, the synaesthete begins to sense the hidden pair’s presence behind the glass, and through her behavior gradually starts to alter the situation between actors and observers. Thus the relationship of the gaze between film space and viewing space becomes modified, while the viewer gradually finds himself occupying the role of the voyeur as well as the test subject herself.

Natalie Häusler (b. 1983, Munich, Germany; lives in Berlin)
In Natalie Häusler’s work, image, color, objects, sound and language are combined into a spatial whole – like an expanded field of painting extended into exhibition architecture. The confluence of visual, written and auditory materials presented reflects their parallel emergence from a studio practice that is supplemented with writing; these texts, wherein the artist translates her immediate surroundings into poetics, provide an important point of departure for the rest of the work. Within Häusler’s poems, observations of the artist’s everyday life are transferred into a temporality generated by the interplay of rhythm, time and duration. Häusler is interested in the immediate reception of her texts, and thus asks artist and writer friends to perform readings of them without any prior advance rehearsal. These speech acts then become part of her work in the form of recorded sound, providing a heterogeneous field of experience for the viewer’s reading and processing of information. The reciprocal relationship between written and auditory forms of language is somewhat repeated in the character of her pictorial objects, which highlight the ability of painting to oscillate between providing visual and tactile impressions.

At Kunstverein Nürnberg, Natalie Häusler presents her installation Case Mod, first shown in 2013 at the Berlin gallery Supportico Lopez and adapted here for the present exhibition context. Laid out in a grid pattern on the floor, square pieces of cardboard are painted in acrylic paint. Initially organized in a clear arrangement tracing out the gallery’s dimensions, the painted objects will be moved and worn as visitors step on them while making their way through the exhibition. They trace an unpredictable motion that leads from a predetermined order to an unsettling disorderliness. This time-measuring aspect reappears in Häusler’s installation of wall-mounted broken plates of colored glass, each displaying a poem printed on paper and accompanied with speakers broadcasting recorded voices reading the respective texts. The texts all derive from the artist’s volume of poetry Still Life, and they have been titled within the installation with names like Sam/Bed, Kasia/Street, Alida/Stairs or Cheyney/Balcony, ascribing these pieces to an intimate relationship and a specific location. Due to the cacophonous totality of voices in the space, individual poems are only intelligible to the viewer if experienced from a short distance. The wear of the floor paneling over time seems is linked to the playing time of the devices – this being determined by the life of their batteries. An experimental staging, the whole installation appears as a perpetually fluctuating counterpart to the viewer, constantly challenging and overtaxing his sensory abilities.

Pauline M’barek (b. 1979, Cologne, Germany; lives in Cologne)
Working with both space and film, Pauline M’barek’s installations oscillate between visual and haptic perception. The preservation and presentation of historic objects in an institutional framework like the museum – with its architecture of exhibition vitrines, its spatial framings and limitations – are at the center of her interest. M’Barek uses the image of presentational gestures performed in the task of museological conservation as signifiers of scientific classification and surveying – taking ethnological objects out of their original context in order to historicize them as canonical objects in an institutional setting. She questions the way that knowledge can be created via perception and interrogates situations wherein objects that may lie in close visual proximity are in fact separated by the greatest possible gulf due to differentiating barriers and protection mechanisms. In several works she addresses the way society deals with its colonial past via ethnological artifacts — for example in Trophy Stands (2011), in which metal mounts intended for ritual masks hang empty, casting shadows on the wall, which always include the viewer’s field of vision.

At the Kunstverein, M'barek presents her video Semiophores (2013), where two hands wearing white gloves present several objects in front of a black background. In this reduced setting, the scene of presentation remains as anonymous as the hands and the objects they are holding, whose volume and outlines become apparent solely via the gestures and the sound of their scanning. The title “Semiophores” (from Greek, meaning “sign” or “signal”) relates to the museological term for artifacts, whose relevance are only created in the museum, and thereby provide evidence of a specific cultural production. The actions in the film are not only related to the rhetoric of scientific collections, but also resemble the dreamlike image-structures of the Surrealists. The alienation of perception via the display of signs stripped of the signified is enhanced by the motif of the gloves. Loaded with simultaneously erotic and uncanny connotations prominent in the work of Surrealist artists like Meret Oppenheim or Valentine Hugo, it refers to the sphere of the imaginary – at the pointing gesture of the magician who makes objects disappear and reappear. The repetitive touches facilitate a sort of visual learning process, in which the form of the objects is detectable while their origin and history remain obscure at the same time. They are invisible as presented objects and rather show themselves as empty zones of perception and memory.

Timothy Davies (b. 1983, London, United Kingdom; lives in Berlin)
Timothy Davies works with a modest economy of things that he finds or searches for in order to transform them further. Within a personal system of references based on his immediate surroundings, Davies creates unexpected alliances between objects, materials and cultural signs. The resulting modifications are brought into the exhibition space as a fragmented whole whose individual parts are connected via finely-tuned lines of correlation. Thereby, chance encounters between objects activate the memory of possible relationships and interactions between human beings. Through the use of progressively outmoded items and technical devices, Davies emphasizes the progression of time and how powers of recollection are activated with the help of certain objects. His works comprise an archive formed from the evidences of collective social experience that are based on true as well as imagined experiences.

Timothy Davies’ contribution to the group show is Spätburgunder – a constellation of works earlier this year exhibited at the Berlin gallery Sandy Brown and reconfigured here at the Kunstverein. A central piece is Late Burgundy (2014), a wine-red fabric hanging equipped with sewn-on plastic stemware. The half-empty glasses and the theatricality of the curtain bring to mind the situation of an opening or a première, though one where the glasses have already been returned. The piece references the Aphrodisiac Dinner Jacket from 1936 by Salvador Dali that the latter would wear to openings, offering the stimulating essence of crème de menthe to the guests. In Davies work, the German Spätburgunder is at the center stage that rather suggesting evening relaxation. Connected with the motif of comfort and retreat into the private sphere is a coffee table, the tabletop in the shape of an oversized reproduction of a DVD. The disc is printed with the cover of the 2004 Hollywood film Before Sunset, the second part of a trilogy introduced nine years previously with Before Sunrise and subsequently continued with 2013’s Before Midnight. The films exemplify the selfassurance of a generation that grew up in the 1990s, growing older along with them. The main subject of the movie is the chance human encounter amidst the backdrop of a world increasingly filled with individual distancing mechanisms. Equipped with a video rental barcode sticker, the DVD cover disrupts the romantic representation of love stories, that are often influenced by mass media and advertising. Other works show Davies focusing on the feeling of connectedness and the simultaneously accompanied experience of alienation. A plug-less power cable lying next to a DVD player could find its counterpart in the serpentine foot of a Baroque-style candlestick: although situated in close proximity, the ends of both objects only ever almost touch.
www.kunstvereinnuernberg.de