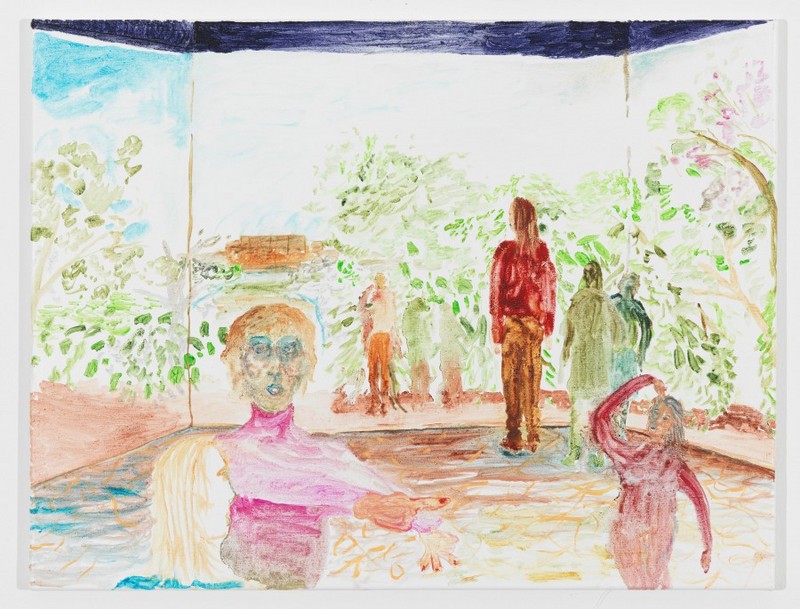 The Kunstverein Nürnberg is pleased to present the first solo exhibition by Lea von Wintzingerode (b. 1990, Bayreuth, Germany) as part of the Marianne-Defet-MalereiStipendium.

Lea von Wintzingerode works with figurative painting and its extension into music and performance. The point of departure for her works is an intense reflection on the possibilities of the medium of painting. She paints her motifs from her imagination, without aiming for realistic depictions. Her paintings unfold fictive constellations in which figures, architecture, objects and nature enter into complex relationships with one another. The dynamics within the painting result from gestures or figures touching each other as well as from their relation to singular facilities such as pavilions, stairs, or folding screens.

Her paintings are characterized by a painting style that focus a process, in which she applies the oil paint very thinly, so that sometimes it dissolves in the white of the canvas or merges with other internal surfaces. In a nonhierarchical manner, she produces watercolors and oil paintings that, despite the fleeting application of paint, feature precise compositions. In her work the artist always focuses on an evolution of seeing, how the tensions and transmissions between the symbols on the picture plane become legible.

In her solo exhibition Young Team, Lea von Wintzingerode is presenting a series of paintings produced in Nuremberg since September 2014 as part of her MarianneDefet-Malerei-Stipend. The figures and fragments of architecture are more strongly localized in nature: in parks, in the forest, or even in the thicket. Usually they are people immersed in interpersonal actions, running, embracing, or looking at one another. Motifs borrowed from the history of art, such as the pastoral and the associated evocation of transience, seems to have been disturbed, however, as when mirrored and glass walls or even a monumental imaginary screen appears in these landscapes, as in the painting laura hockney and boy david. Again and again, elements of a media-dominated gaze break into the scenes, as in the paintings zoom, t.o.b. and guided tour at the park, in which respectively a young man is recording the events with a photo camera or a mobile phone. Other examples of this reflexive seeing include the constantly moving figures of viewers present in nearly every situation. They look into the scenes from the lower edge of the painting, turn their backs on the viewer, or watch the events from a certain distance as isolated figures.

Lea von Wintzingerode’s figures give the impression that their poses are an effort to find the meaning of their own corporeality. They seem to ask existential questions by their stances, which can only be answered by engaging with and exchanging glances with others. In the exhibition space, piano pieces composed and played by the artist can be heard on headphones, with titles such as face, fingertip, and glance, reinforcing the body-aware activities in the scenes. In brief movements and songs, the music accompanies the viewers as they walk through the space. Lea von Winzingerode treats reflections on human perception like an ongoing personal discussion of the challenges that today’s painting contains for the viewers.

Lea von Wintzingerode (b. 1990, Bayreuth, Germany; lives in Berlin) studied from 2010 to 2012 at the Academy of Fine Arts Vienna, with Prof. Daniel Richter; and from 2012 to 2014 at the University of Fine Arts Hamburg, with Prof. Jutta Koether. 2014 she received the B. F. A at the University of Fine Arts Hamburg. Exhibitions (Selection): Hiscox Art Award exhibition, HFBK Hamburg (2014); Two, together with Christian Falsnaes, Gallery of HFBK, Hamburg (2014); Secondo Stile: Lea von Wintzingerode, a project by Paolo Chiasera, Moonlight Lounge, Berlin (2013); Superfrontal, together with Julie Gufler, Friday Exit, Vienna (2012).

In the frame of the Marianne-Defet-Malerei-Stipendium the publikationYoung Team will be released at the opening. The booklet has been developed with an artistic concept by Lea von Wintzingerode, in cooperation with the graphic designers by Büro Unfun. With text contributions by Jutta Koether, Christiane Rekade and Simone Neuenschwander. The publishers are the Institut für moderne Kunst Nürnberg and the Kunstverein Nürnberg, February 2015.