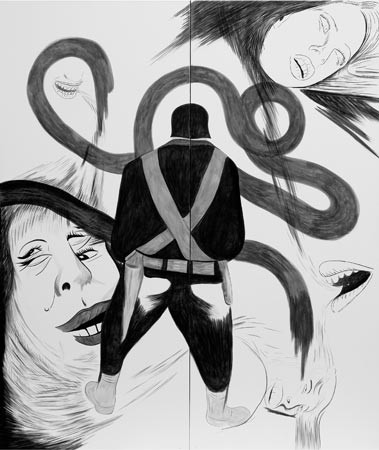 “La búsqueda del ombligo” (The search of the navel) is a series of twenty-eight large-format diptychs produced from 2005 to 2007, in which Daniel Guzmán develops through the medium of drawinga research about the series ‘La verdad’ (The truth), 1945 by José Clemente Orozco.
The usage of high contrast allows Guzmán to synthesize the characteristics of Orozco’s work, whose ‘firstattempt’ drawing, leave exposed textures, strokes, and expression, where figure, gesture and matter become integrated. One element to stress from “La búsqueda del ombligo” is the format and the way Guzman approaches to it: the middle line that separates both wings of each diptych, along with the geometric centre are structures around which the forms articulate or confront.
Although the juxtaposition of image and text has been a constant feature in Daniel Guzmán work, in this series it is worthy to point out the absence of verbal referents as part of the composition; however, the titles become progressively more specific and connoted regarding the provenance of the figures, characters and situations involved in each piece.
Guzmán fuses and transmutes a number of historic and iconographic references: Aztec gods, superheroes, illustrations of rock albums, diverse characters from Mexican comic strips of the sixties and seventies, from the current political cartoons, and from the movies.
Satire and violence merge in this work in which mutilated bodies turn into landscapes, the landscapes become atmospheres, and the atmospheres transform into visual exclamations. At the same time it exists a notable set of contrasts beyond the chromatic one already mentioned; the geometry associated with monumental forms (particularly in Pre-Hispanic sculpture) opposes to the accidental in organic shapes.
“La búsqueda del ombligo” constitutes an exploration towards the possible representations of a certain origin from different perspectives: chronological, metaphysical, cultural, or individual.
www.kurimanzutto.com