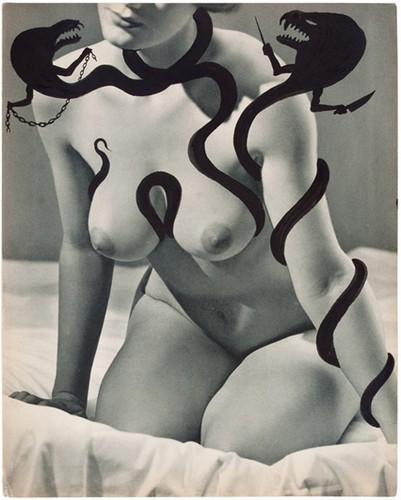 kurimanzutto presents the first solo show by Dr. Lakra (Jerónimo López) at the gallery. This show is a wall drawing that expands throughout the 360 degrees of the space.
The visual field is saturated by innumerable stylistic references —from female African figures, Japanese characters, scientific, medical and anthropological illustrations of the nineteenth century, to ‘porn’ photonovels, images in record covers, film scenes, publicity found in vintage magazines, and graffiti— mixing to conform an absolute image, where minimal landscapes camouflage behind the close-ups of exposed sexes, contorted faces, and signs of various body fluids.
This load of characters, bodies and gestures, come from such a diverse range of sources that they only share the visual avidity and the accumulative compulsion of this artist. Heterogeneity extend to the use of materials —ink, acrylic paint, pastel, and graphite pencil— with which Dr.Lakra obtains a multiplicity of drawing qualities.
Dr. Lakra merges graphic elements from the representations of the history of modern science and ‘high culture’, religious symbolism, and pop icons, producing a total atmosphere in which the viewer becomes embedded, and his/her gaze gets fully trapped.

His work is part of the Judith Rothschild Foundation Contemporary Drawings Collection-Museum of Modern Art, New York, L.A. MOCA, Yokohama Museum of Art, Walker Art Center and Hammer Contemporary Collection, among others. In 2005 he produced the book Los Dos Amigos in collaboration with Abraham Cruzvillegas. RM and kurimanzutto have published Dr. Lakra’s most recent book Health & Efficiency this year.
His work will be object of a revision at the ICA Boston in April 2010, which will also be accompanied by a monographic publication.
www.kurimanzutto.com