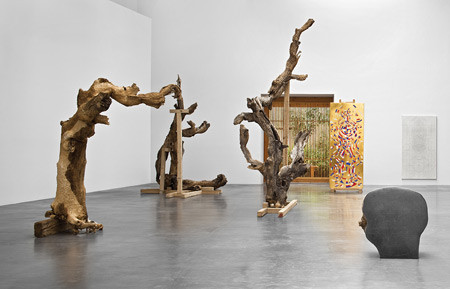 (...) There are several things that I find shocking in Gabriel Orozco, he said: the way in which he ironically uses materials, life and memories, those that have accumulated through the years and which make you be yourself. I see one of his works and I meditate on myself, as if I were a Phoenix reborn from those depths of the world where nothing seems to have a coherent explanation
(...)
Elmer Mendoza (1)


kurimanzutto presents Gabriel Orozco’s most recent work produced after a series of trips made early 2009 to the natural reserves and biospheres in Puebla, San Luis Potosí, Querétaro and Oaxaca in México.
For this exhibition, Orozco has intervened the remnants of desert plants using golden leaf, plaster, graphite, wooden structures and volcanic rocks. These elements gathered result in a re-constructed and re-composed landscape at the gallery. In this temporary inhabitable landscape, nature and human order reveal at once, yet the natural forms become enhanced instead of being modified.
All the vernacular species presented were found dry and collected from different locations throughout Mexico. Among the vegetal types that could be seen at the exhibition are the “patas de elefante” (elephant’s feet), Beaucarnea gracilis, which could live over thousand years and whose stem accumulates large amounts of water to face the drought, acquiring the appearance and composition of a sponge when it dries, “nopaleras”, all these from Puebla; tumbleweeds from the desert in Matehuala, San Luis Potosí and Querétaro; and “quiotes”, maguey’s stems and flowers from the south coast in Oaxaca. Once “patas de elefante” die, they get cut and burnt. This activity constitutes an ancient Mesoamerican technique named “roza-tumba-quema” in which carbonized matter is used to increase soil’s fertility.
The region of Tehuacán valley, also known as Sierra Mixteca, is where the biggest Mexican mountain chains–Sierra Madre Oriental, Neovolcanic Axis and Sierra Madre del Sur– join. About 200 million years ago this area was covered by the sea, as two thirds of current Mexico’s solid land were. The similarities between cactus’ structures and fibers and those of coral reefs are remarkable.
Orozco’s interest in organic forms and natural materials found has been constantly present in his work: from one of his earliest pieces presented at On Purpose –an exhibition at Antiguo Convento del Desierto de los Leones (Mexico City, 1989)— where he showed a group of trunks expanding on the floor of one of the convent’s chapel along with an elephant’s head suspended on the wall, to his more recent sculptures “Espumas” (Foams), 2003, in which the artist analyses the behaviour of a highly industrial material, polyurethane foam, acting as a living creature and transforming from a semi-liquid lava-like state into a solid that resembles some species of sea’s fauna.
The most difficult venture for “Matrix Mobile”, 2004, consisted in the recollection and completion of all the osseous structures of the whale, and its further reconstruction and consolidation for it to be installed at Jose Vasconcelos Library (Mexico City). In the exhibition at kurimanzutto the assemblage of elements is deliberately exposed. This simultaneous superposition of a principle of distribution over the natural structures has characterized Orozco’s practice.
Branches woven by the wind as spherical shapes or water’s absence converted into fibrous knitting amazes Gabriel Orozco the same. As he has expressed “Most of my work happens in those borders in which order (structure,
language, urban faith) confronts disorder (the organic, the phenomenon, the savage) (...). In such spaces of friction between the field and the city, between organic and inorganic, between ‘artificial’ and ‘natural’ is where most of my work arises, and it is what I –as a wanderer— find.” (2)
The artist thanks Dr. Alfonso Valiente, Víctor Serrano, Secretaría de Ecología de Tlalpan, Cimarrones, Taller Flora, Christián Maciá, Adriana Riquer, Arturo Hernández, Nayeli Lavanderos, Karla Castillo, Carme García, Rita Ponce de León, Restauro, Marco Barrera Bassols, Museográfica, Fletes y Mudanzas Filiberto Mendoza, Tania Bohórquez, Intituto de Artes Gráficas de Oaxaca, Casa San Agustin, Etla and Francisco Toledo for their support and collaboration in this exhibition.
(1) Mendoza, Elmer (2008) ‘Unexpected’ in Mexico: expected/unexpected, Paris: Maison Rouge, trans. Pilar Villela. (Catalogue of Isabel and Agustin Coppel Collection). pp. 162
(2) Fragment of the lecture presented at Museo Rufino Tamayo (Mexico City, January 30, 2001).

Gabriel Orozco (Jalapa, Mexico, 1962)
He studied at the Nacional School of Fine Arts-UNAM, Mexico (1981-84) and completed his academic studies at Círculo de Bellas Artes, Madrid (1986-87). He currently prepares a retrospective exhibition to be inaugurated next December at the Museum of Art Museum (New York); this show will tour to the Centre Pompidou (Paris), Kunstmuseum Basel and Tate Modern (London). His most important exhibitions have been presented at Museo del Palacio de Bellas Artes, Mexico City (2007); Palacio de Cristal, Museo Nacional Centro de Arte Reina Sofía, Madrid (2005); Serpentine Gallery, London (2004); Centro de Artes Visuais, Coimbra, Portugal (2003); Museo Rufino Tamayo, Mexico City (2000); Philadelphia Museum of Art, USA (1999); Artangel, London (1997); Museum of Contemporary Art Chicago, USA (1994); Museum of Modern Art, MOMA - Projects 41, New York (1993). From 1987 to 1992 he conducted the ‘Taller de los Viernes’ (Fridays workshop), a group of discusión and artistic production in which some of the most important artists of the contemporary Mexican art scene participated. In 2007 he was guest curator of Il Quoitidiano Alterato presented at the 50 Venice Biennale. In 2005 he was lecutrer at Cátedra Latinoamericana Julio Cortázar. In 2007 was awarded the Orange Prize. He lives and works in New York, Paris and Mexico.
www.kurimanzutto.com