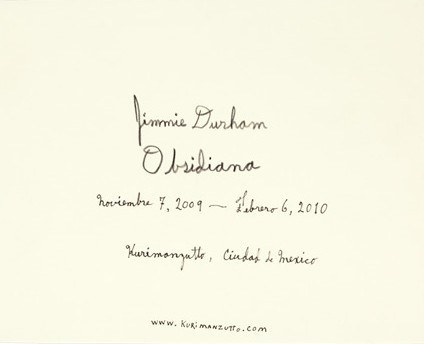 OBSIDIANA
a project by Jimmie Durham

kurimanzutto presents Obsidiana by Jimmie Durham, a project developed over the last two years. Durham’s multifarious practice spans from drawing, sculpture, installation and video to performance, literature and poetry.
Jimmie Durham lived and worked in Mexico, in the southern city of Cuernavaca from 1987 until 1994. Afterwards he started traveling back and forth throughout Eurasia, which stirred up a concern in him about the idea of Europe: “which doesn’t describe an actual continent but is only a political obfuscation”. It is fifteen years after his departure that he presents his first solo show in the country.
Durham has stated his refusal for the expectancy of purity in art. His work is always embedded and affected by the location in which it is produced. This exhibition meditates upon obsidian, first, as a beautiful material for Durham, secondly, as a stone inlayed by multiple connotations, heavy cultural preconceptions and layers of history; all of which the artist tries to make manifest by enclosing the presence of the material in three different abstract sculptures displayed in individual atmospheres.
Obsidian, a black volcanic glass with an irregular molecular structure, whose tonalities vary according to the direction in which it is sectioned, was widely used by Aztec, Toltec and Huastec Mexicans.
The first work at the entrance of the exhibition, The Doorman, is one of Durham’s distinctive anthropomorphic sculptures. This character, made out of iron, Murano glass and gold, showing a red obsidian heart, personifies Tezcatlipoca. Tezcatlipoca —that means “smoking mirror”— was represented by Aztecs with a polished black obsidian on his chest. He was Quetzalcoatl’s brother and complementary deity. The Nahua legend tells that they created the world together, however for the Toltecs they were rivals and opponents.
In European mythology, Vulcano, for Romans, or Hefesto, for Greeks, was a god who emerged from the profundities. He is described as a lame male, whose foot was grabbed while he was escaping from hell. Tezcatlipoca is also associated with the underground and the darkness, and depicted with one foot only too. This happenstance has unchained Durham’s investigation.
The artist has expressed his distrust in written language for it takes away memory and constricts “how and what to think and to be”,1 however this very circumstance plays a central part of his practice. Instead of establishing connections, the presence of texts (mistranslations, word-games, and words labeling objects) trigger meaningful disruptions in Durham’s work. His apparently innocent yet awry mimicry and verbalization of attitudes and rules regulating artistic creation and consumption, implicates the viewer with humor. Likewise in Bertolt Brecht’ theatre-plays, there is no attempt to divert the audience from the fact that, what they are seeing, is nothing else but a play —or a sculpture, in Durham’s case—; quite the opposite, it is crucial to acknowledge it. Nevertheless, this supposed permissiveness of fiction reveals the historical complicities of social actors. For this project Jimmie Durham has immersed in a process of knowledge of this Mexican stone, its natural state and characteristics, and the possible ways to transform it. Durham reflects on the cultural features associated to the very existence of a rock like this. For him, ideas concomitantly occur with the recognition of materials, thus any intellectual development relies upon these physical encounters.

Jimmie Durham (United States, 1940)
Jimmie Durham is a sculptor, essayist and poet. He was born in the USA in 1940.
He began working as a sculptor in 1963. His first solo exhibit was at the public gallery of the University of Texas at Austin in 1965. The cultural and political uses of material, objects and space were the center of his practice at this beginning. In 1969 Durham moved to Europe and studied at the Ecole de Beaux Arts in Geneva. Along with three other sculptors he formed a group, Draga, which researched ways to allow the plastic arts more access to public life. At the same time, along with a Mapuche Indian from Chile and a Quechua Indian from Bolivia, he formed an organization, Incomindios, which attempted to co-ordinate and encourage support for the struggle of Indians of the Americas. In 1973 he returned to the U.S. to become a full-time organizer in the American Indian Movement (AIM). During this time he served as director of the International Indian Treaty Council and representative to the United Nations. In the early 1980s Durham returned his attention to art in New York City. During these early days of “post-Modernism”, Durham worked with a loose group of artists who were Puerto Rican, Afro-American, Asian-American and American Indian, following the instigation if his partner, the artist, Maria Thereza Alves. This group exhibited together frequently in Manhattan’s Lower East Side, Harlem, the Bronx and Brooklyn. In 1983 West End Press published Columbus Day, a book of his poems and in 1988 his poetry was also included in Harper’s Anthology of 20th Century Native American Poetry. In 1987 Durham moved to Cuernavaca, Mexico, where he was based until moving to Europe in 1994. During his time in Mexico, Durham began to exhibit internationally, including at the Whitney Biennial, Documenta IX, ICA London, Exit Art, New York, the Museum of Contemporary Art, Antwerp and the Palais des Beaux-Arts, Brussels. He also published a number of essays in books and periodicals, including Art Forum, Art Journal and Third Text. In 1995, A Certain Lack of Coherence, a collection of his essays was published by Kala Press. Since moving to Europe, Durham’s work has focused primarily on the relationship between architecture, monumentality and national narratives. Publications on anti-architecture include: Der Verfuhrer und der Steinerne Gast, Springer, Vienna, 1996; Between the Furniture and the Building: Between a Rock and a Hard Place, Walter Konig, Cologne, 1998; Stoneheart, CCA, Kitakyushyu, 2001; Jimmie Durham, Edizione Charta, Milano, 2004 and The Second Particle Wave Theory, University of Sunderland and the Banff Centre, 2005. His solo exhibitions in Europe have included venues such as the Musée d’Art Moderne de la Ville de Paris, Musée d'Art Contemporain in Marseilles, Museum Voor Actuele Kunst in den Hague, Hamburg Kunstverein, FRAC in Reims, Wittgenstein Haus in Vienna, Kunstverein Munich. He has also participated in biennials such as the Venice Biennale (1999, 2001, 2003 and 2005), Whitney Biennale (1993 and 2006), and Biennale de Lyon (2009) among many others. In 1995 Phaidon published Jimmie
Durham, a comprehensive survey of his art. In 2009, on the occasion of Durham’s retrospective at the Musée d’Art Moderne de la Ville de Paris, Pierres rejetées, a catalogue of Durham’s work in Europe was published.