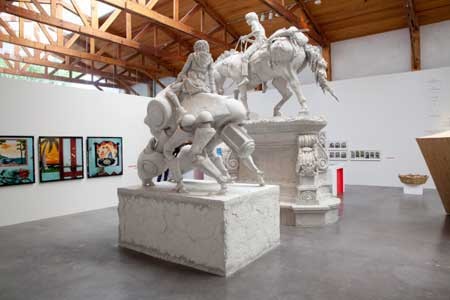 Inspired by the 200th anniversary of Latin American independence and the political concept of Pan-Americanism, Panamericana brings together a large number of emerging artists from throughout Latin America.
Its inspiration is historical, but Panamericana is a thoroughly contemporary exhibition, offering a look at a wide range of visual art being produced today. It is also a highly subjective exhibition, formed by the curator’s own experiences in the region, his observations of its cultures, and a personal examination of his own Latin American heritage.
The exhibition looks at the individuals, questions, and issues that are crucial to Latin America’s current cultural and political climate.
Panamericana points toward the enormous wealth of, and relevance of, Latin American culture while acknowledging that it is ultimately impossible to offer a single, definite thesis on such an infinite subject.
The participating artists represent a younger generation of Latin American artists who have in recent years begun to contribute significantly to the cultural landscape of their countries and the region as a whole. While there are certainly connections among their forms, materials, and ideas—including the subject of identity, and its fluidity as a concept—these artists from Mexico, Puerto Rico, Argentina, Colombia, Costa Rica, Brazil, Cuba, the United States, and beyond do not represent a single artistic style or a hermetic system of visual communication. One of the objectives of Panamericana, rather, is to bring together these diverse voices and introduce them to one another in order to foster a closer dialogue surrounding the visual arts in Latin America and to make that dialogue visible beyond the region.
The exhibition is curated by Jens Hoffmann, director of the CCA Wattis Institute for Contemporary Arts in San Francisco.