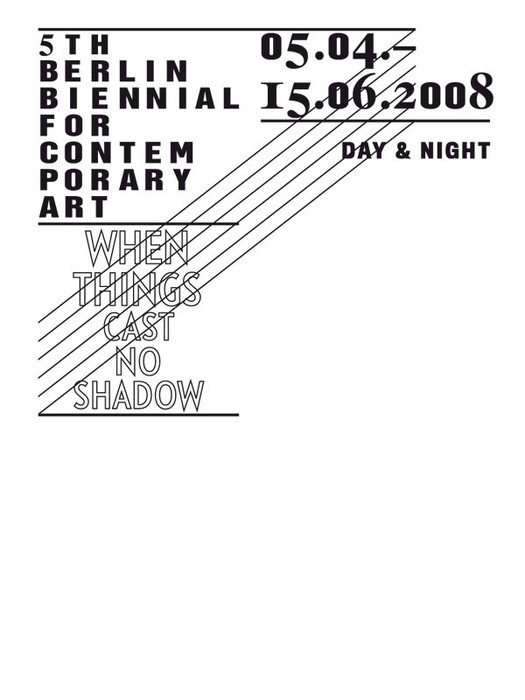 The 5th berlin biennial for contemporary art, entitled When things cast no shadow and curated by Adam Szymczyk and Elena Filipovic, opens to the public on April 5, 2008. Preceding the inauguration of the 5th berlin biennial by a few weeks, the first of five alternating, artist-curated solo shows conceived as part of the biennial and held at the Schinkel Pavillon opened on March 20, 2008.

Curator Adam Szymczyk was selected in September 2006 by an international committee comprised of Chris Dercon, Director of the Haus der Kunst, Munich; Charles Esche, Director of the Van Abbemuseum, Eindhoven; Chrissie Iles, Curator at the Whitney Museum of American Art, New York; Udo Kittelmann, Director of the Museum für Moderne Kunst, Frankfurt; and Chus Martínez, Director of the Frankfurter Kunstverein. In February 2007, Adam Szymczyk invited Elena Filipovic to be co-curator. Together they developed When things cast no shadow, experimenting with exhibition form and temporality, and determined by a critical engagement with artists’ working processes.

When things cast no shadow divides its time by day and by night: The day part of the
5th berlin biennial will be on view at four venues and includes mostly newly commissioned works by 50 artists, spanning four generations and working in a variety of media, while the night part of the exhibition will feature over 100 artists and cultural producers in 63 nightly events taking place in locations spread across the city.
www.kw-berlin.de