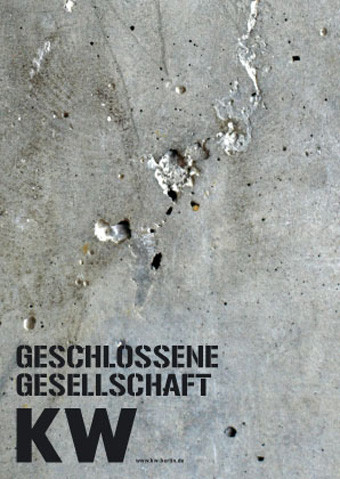 The color orange turns into a symbol of a legal vacuum, voices from the interior can be heard outside, the eye of the viewer can’t stand its view.
The spaces of image and association that feed on allusions and imaginary worlds bring forth ideas that in turn produce realities. Images can frighten but they can also offer an escape, they can convey an exterior as well as an idea of the interior. Both worlds may get in touch, but inside and outside will still remain irreconcilably juxtaposed, with doors marked “no exit” and “no entry” on either side. Solely images and imaginations encounter.

You’re in prison and there are spaces in which you can work, also inner spaces, but you can’t imagine being anywhere else, otherwise you injure yourself too much because you are immediately thrown back into reality. That’s why you’re not allowed to dream in prison.
Antonio Negri

The exhibition is funded by the German Federal Cultural Foundation.
www.kw-berlin.de