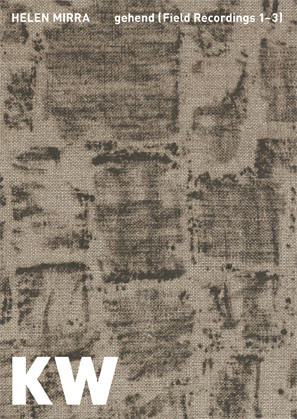 In the realm of artistic positions that deal with principles of nature and classification, Helen Mirra’s works hold a particular position. Rather than idealizing nature, they hover between processes of scientific experimentation on the one hand and calligraphic meditation on the other—a combination that produces a great sense of both melancholy and measure. Helen Mirra made her new groups of work—prints and rubbings—during hikes in and around Bonn, Berlin and Zurich. Due to their poetic minimalism these works open up a range of associations that animate the “small things” in nature and mobilize our ethical conscience towards the environment and its diversity.

In the summer and autumn of 2008 the musician Ernst Karel visited Mirra while she was in residence in Switzerland, and accompanied her on walks in the mountains. Karel made a series of stereo audio recordings of the transport systems they took to arrive at trailheads. Karel’s solo audio CD titled Swiss Mountain Transport System was released on the label Grünrekorder. In 2009 Mirra and Karel performed at Taka Ishii Gallery in Kyoto, Japan, with Karel’s recordings and Mirra on percussion. This inspired a collaborative 68 minute eight channel version of the project.
During the opening day of the exhibition, this work will be playing on the top floor of KW.

Presentation of Mirra’s silent 16mm films and Karel’s stereo audio works, followed by a public discussion
Admission: 5 Euro
Location Recordings is a cooperation of KW Institute for Contemporary Art and Certain Sundays that takes place in collaboration with the Berliner Künstlerprogramm/ DAAD.
www.kw-berlin.de