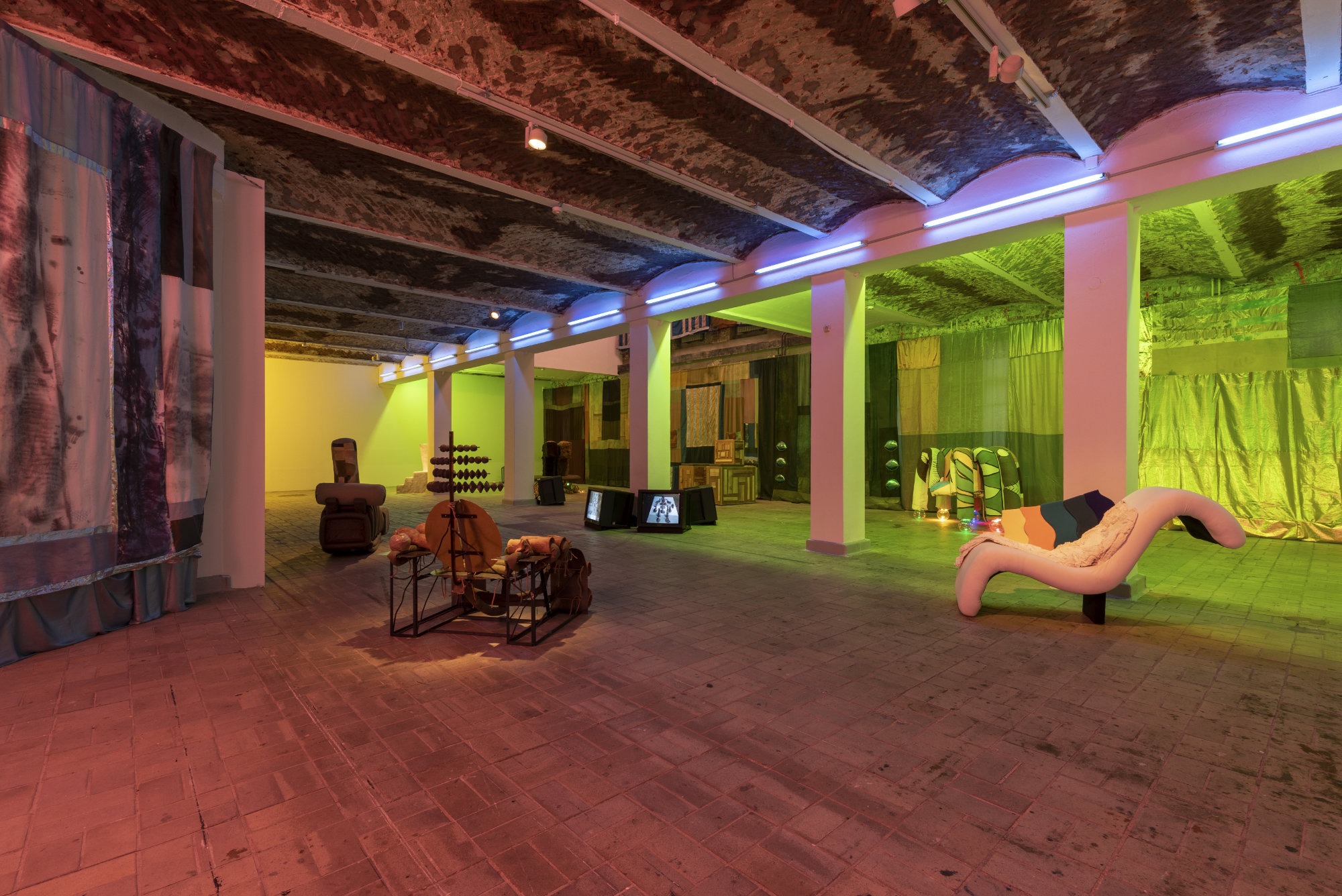 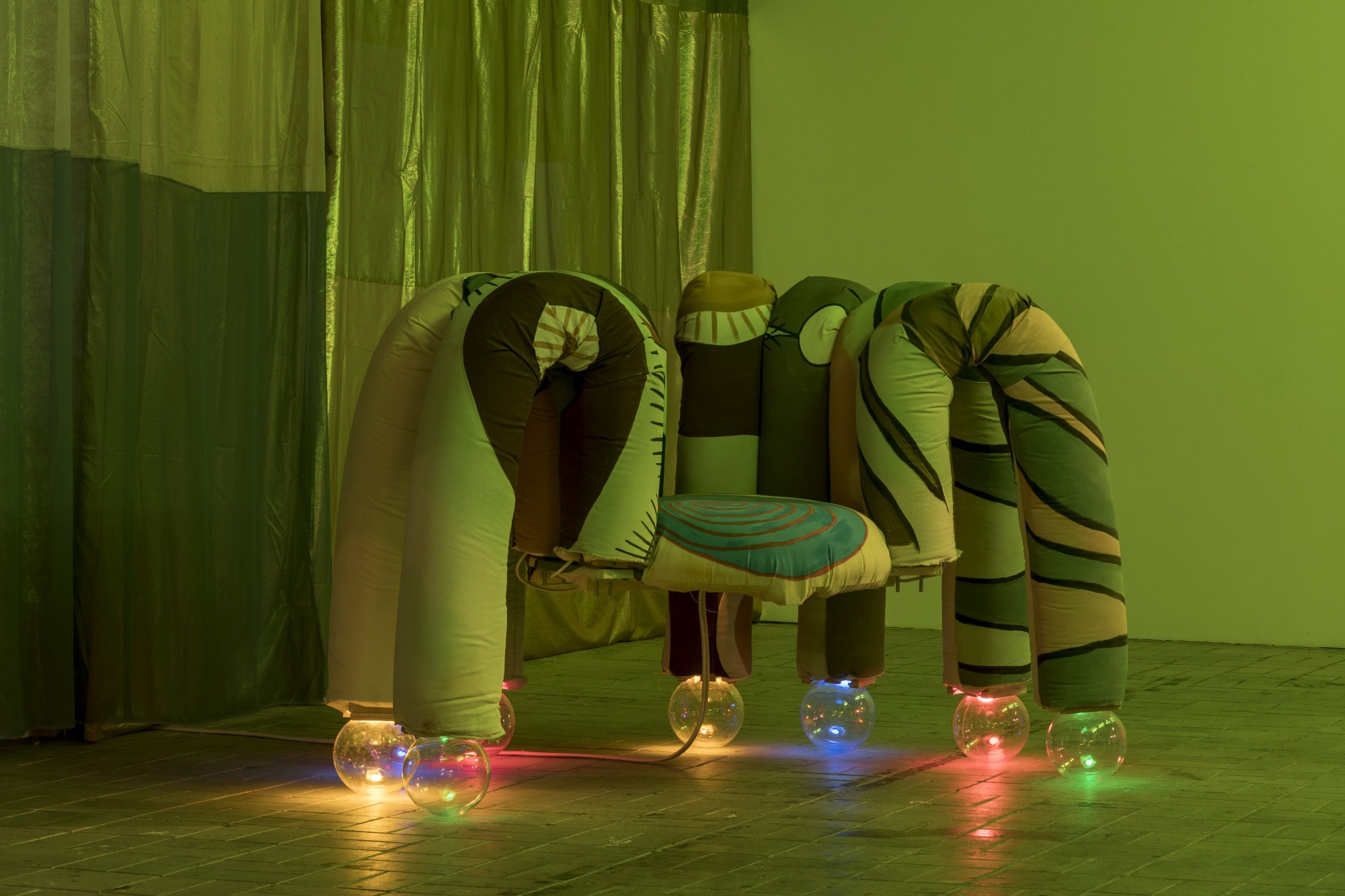 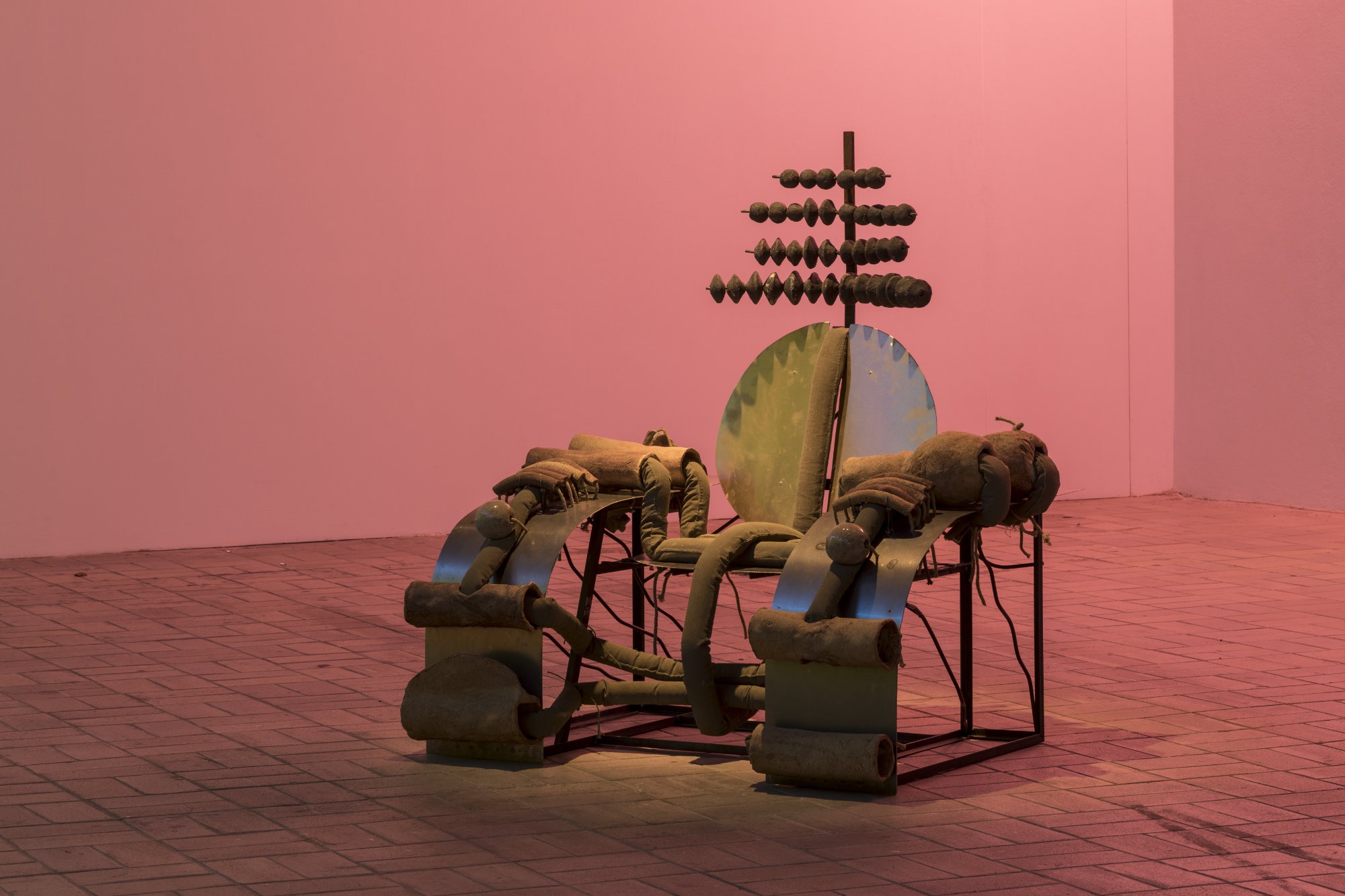 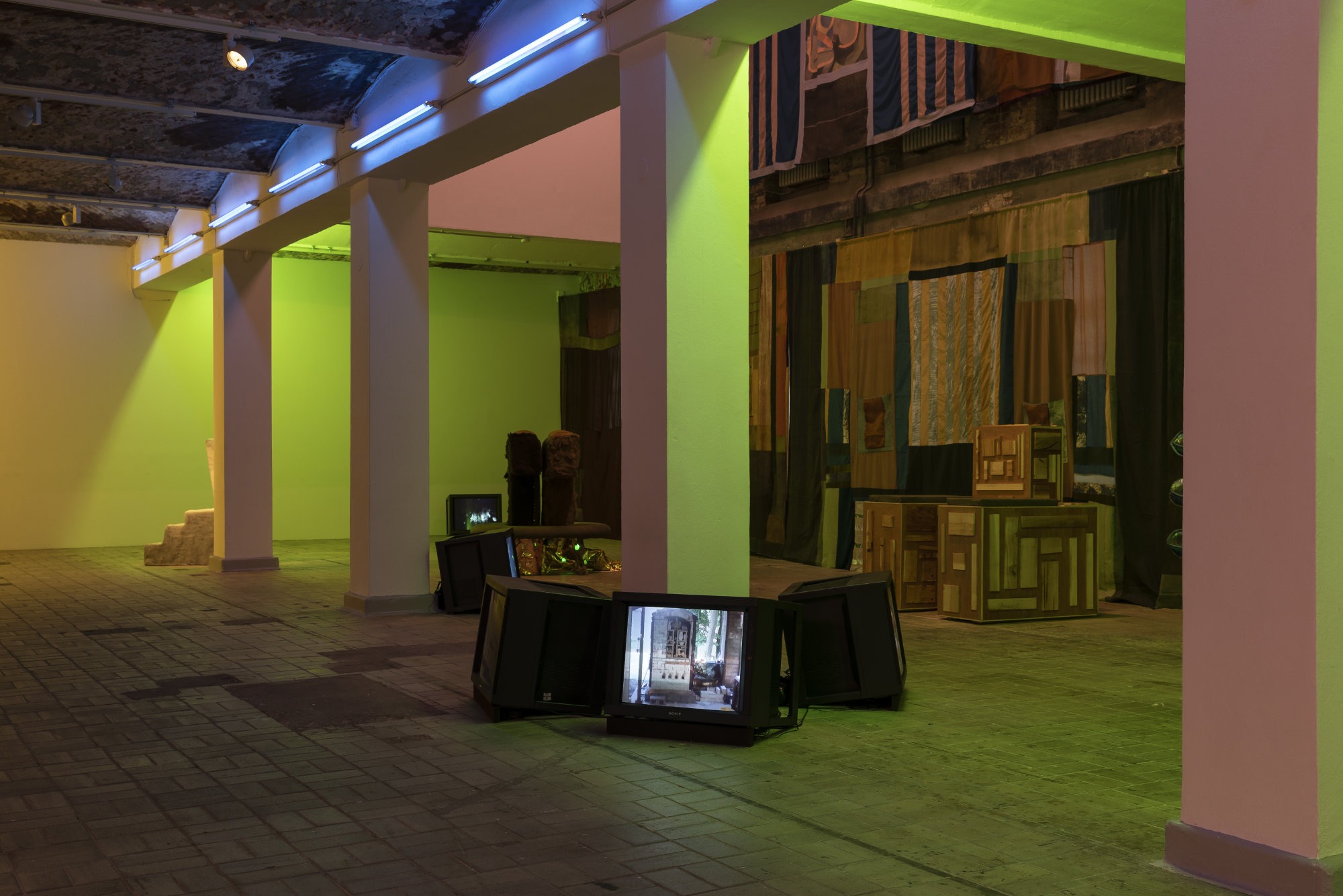 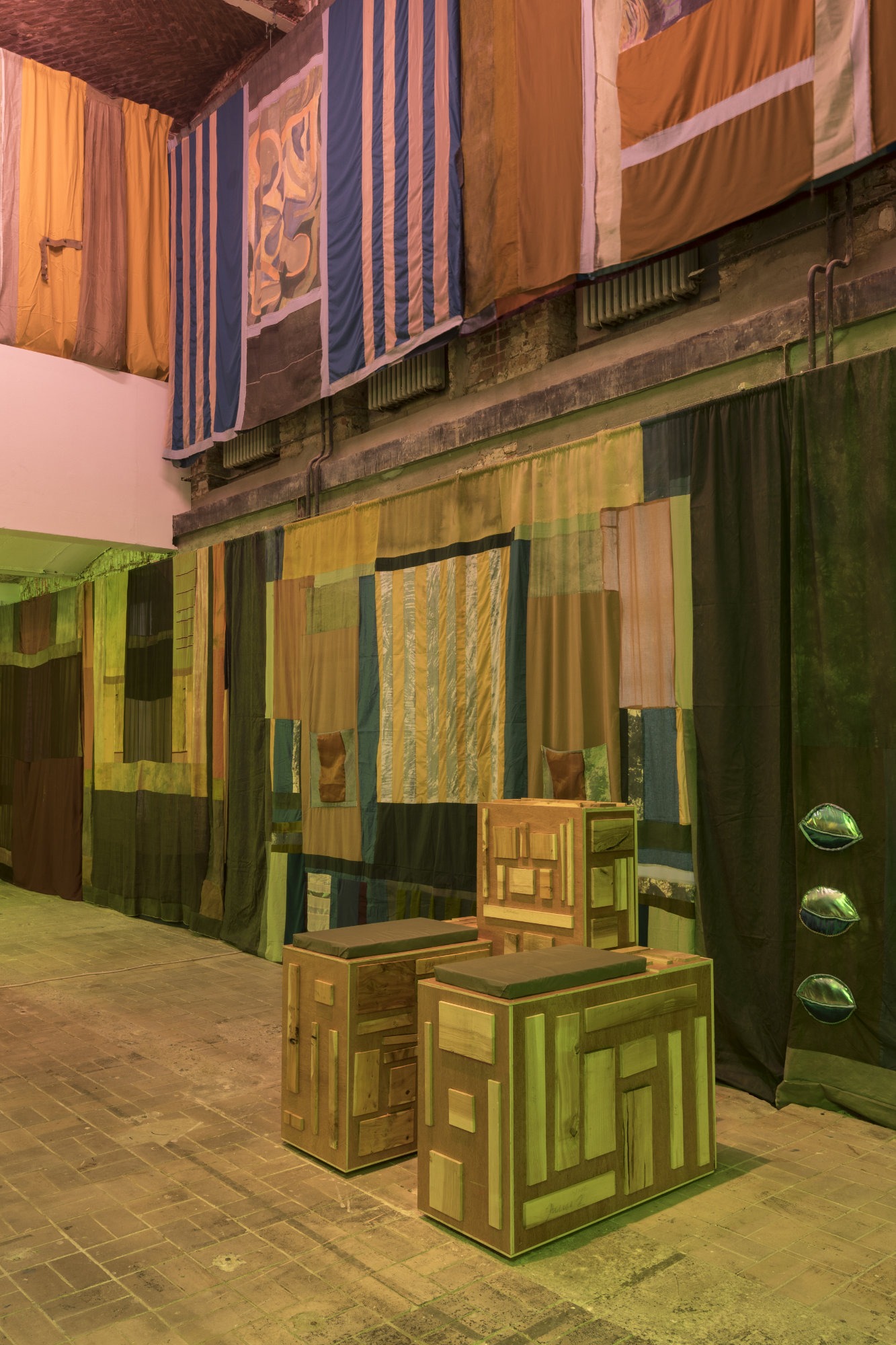 The foundation for the exhibition Womb Life by Tamara Henderson is manifold. One strand can be traced back to an encounter at Gatwick Airport. At 10 am on Sunday, May 27, 2018, in a Tokyo-style hotel room capsule, the artist had an impromptu hypnotherapy session with the hypnotist Marcos Lutyens. The written account by Lutyens tells us that an inward-leading progression took place: “(...) into the mud, the clay, the slip. Dissolving downwards into the loam with an x-ray view of time and space and body.”

Tamara Henderson’s process of creation develops its own mythology out of an ongoing practice of writing, drawing, and making notations of everyday objects. She registers patterns in objects and atmospheric phenomena and logs their appearance in dreams in order to expand conventional registers of consciousness. The hypnosis session paved the way for a multitude of resulting evolutions that would eventually become the work for the exhibition in the form of a film and a body of sculptures—born from the language of the mud, matured in the body of the artist, decoded by the umbilical chord, and finally grounded by the pulse of the placenta.

For KW Institute for Contemporary Art the exhibition takes the shape of a new five-channel film, also entitled Womb Life (2018), accompanied by a group of five characters masked as performative items of furniture and equipped with intrinsic sensorial instructions for the willing participant. Henderson works through an instinctive approach. Here, inanimate objects often become implicated in the act of storytelling as they shape-shift their way across different bodies of work, time zones, and spaces.

The film, shot on 16mm and edited in camera, chronicles the epic journey of the project, from its initiation under hypnosis at Gatwick Airport, the birth of its characters as part of the Kiln Residency at CASS Sculpture, a performance at the London Flower Market for Art Night 2018, to its final iterations as furniture sculptures at KW. Each of the five characters is conceived as a performative body that has a key role in the conception of the film—lighting its body, amplifying its voice, and recording its movement. The characters derive from aspects of the circadian life cycle of creation in nature: from the origins of life in seeds and from the interplay between the elements of light, earth, and water.

In the galleries the windows are shrouded in custom made curtains culled from previous bodies of work, transforming the exhibition space into a cavernous viewing room that hosts the intricate interaction between the film and the sculptures. The new body of work is further accompanied by a selection of older works by the artist to illustrate the complex process of creating the pieces as something only partially under the artist’s control, while also being outsourced to unconscious processes informed by hypnosis-, trance-, and dream-like states.