YOU KILLED ME FIRST. The Cinema of Transgression 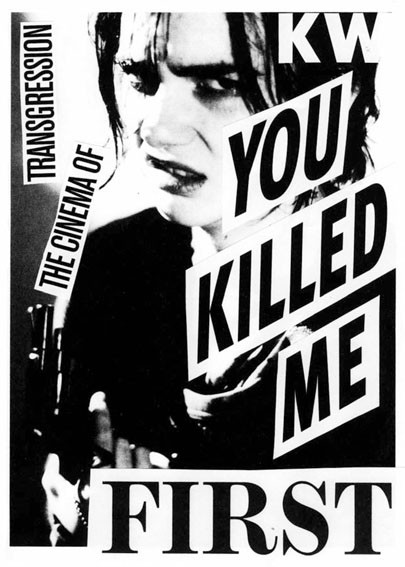 In the 1980s a group of filmmakers emerged from the Lower East Side, New York, whose shared aims Nick Zedd later postulated in the Cinema of Transgression manifesto:

„We propose ... that any film which doesn’t shock isn’t worth looking at. ... We propose to go beyond all limits set or prescribed by taste, morality or any other traditional value system shackling the minds of men. ... There will be blood, shame, pain and ecstasy, the likes of which no one has yet imagined.“

While the Reagan government mainly focused on counteracting the decline of traditional family values, the filmmakers went on a collision course with the conventions of American society by dealing with life in the Lower East Side defined by criminality, brutality, drugs, AIDS, sex, and excess. Nightmarish scenarios of violence, dramatic states of mind, and perverse sexual abysses – sometimes shot with stolen camera equipment, the low budget films, which were consciously aimed at shock, provocation, and confrontation, bear witness to an extraordinary radicality. The films stridently analyze a reality of social hardship met with sociopolitical indifference. Although all the filmmakers of the Cinema of Transgression shared a belief in a radical form of moral and aesthetic transgression the films themselves emerged from an individual inner necessity; thus following a very personal visual sense and demonstratively subjective readings of various living conditions.
Even though the movement has remained largely unknown, the Cinema of Transgression has been a significant influence for later generations of artists.

YOU KILLED ME FIRST at KW Institute of Contemporary Art in Berlin is the first exhibition on the Cinema of Transgression.


With the generous support by the Capital Cultural Fund, Berlin.

Saturday, March 10, 2012, 7.30 pm
Llik your idols, documentary about the Cinema of Transgression by Angélique Bosio,
France 2007, 70 min., OV
Film screening in the presence of the director

The cultural programs of KW Institute for Contemporary Art are made possible with the support of the Governing Mayor of Berlin – Senate Chancellery – Cultural Affairs.
www.kw-berlin.de