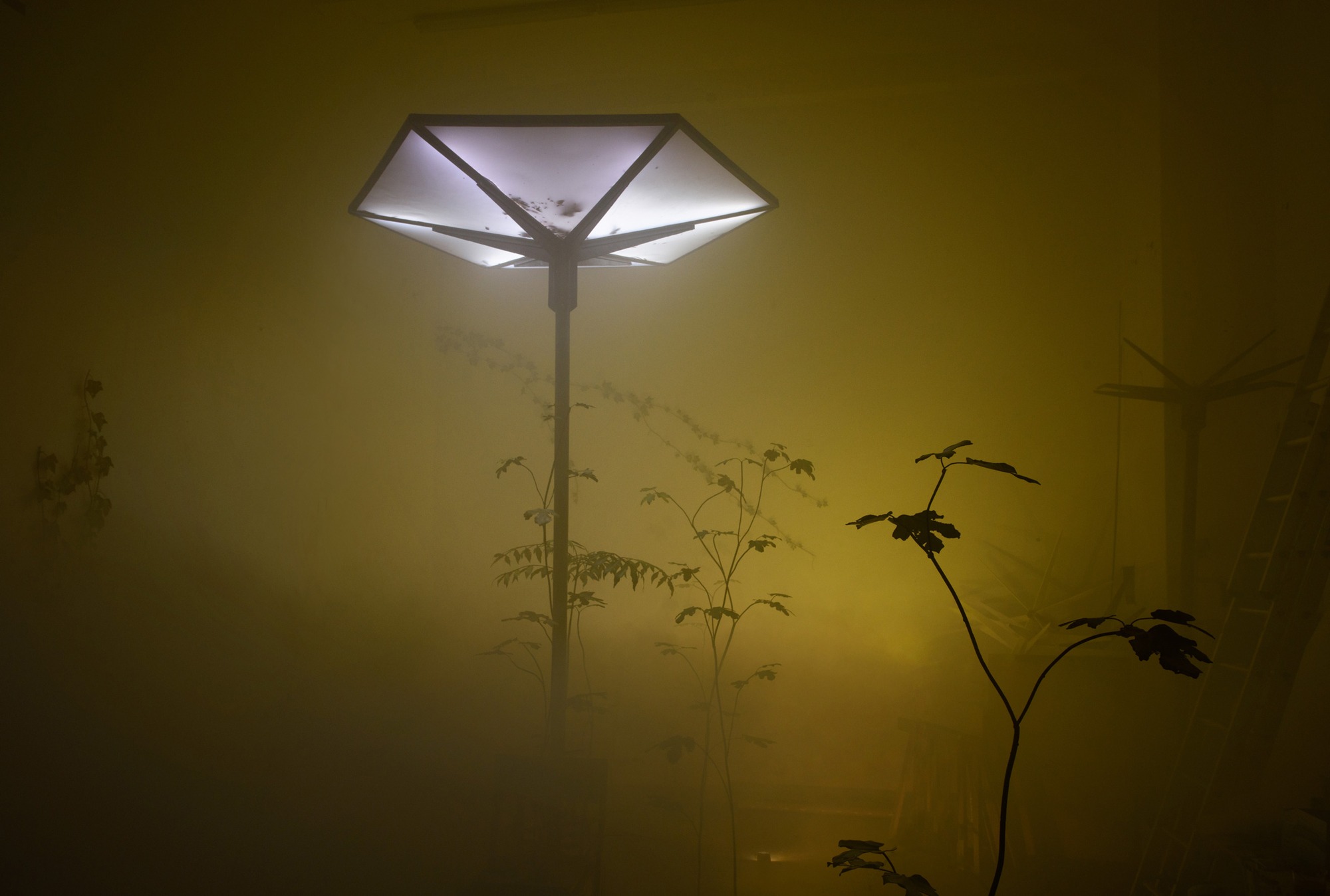 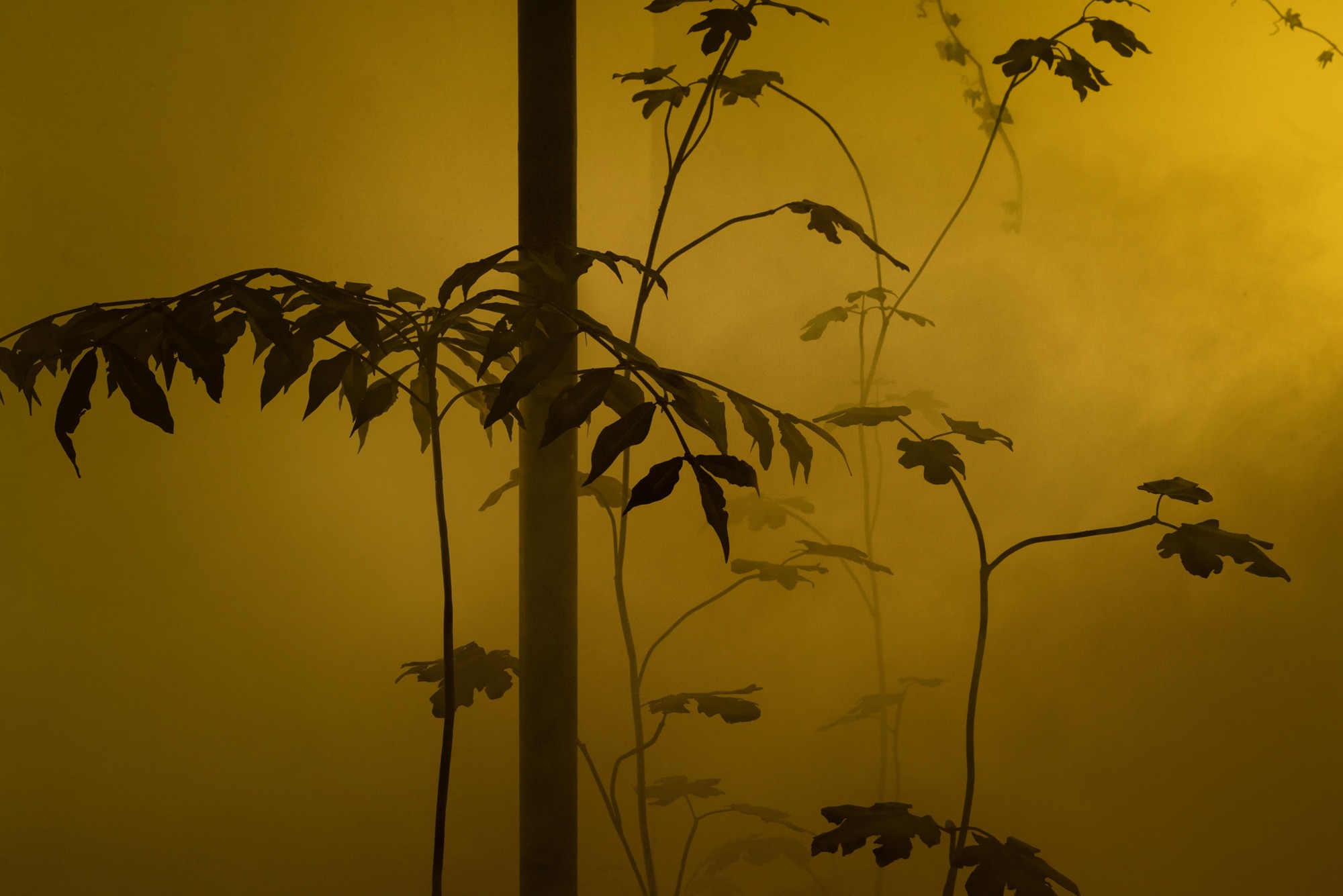 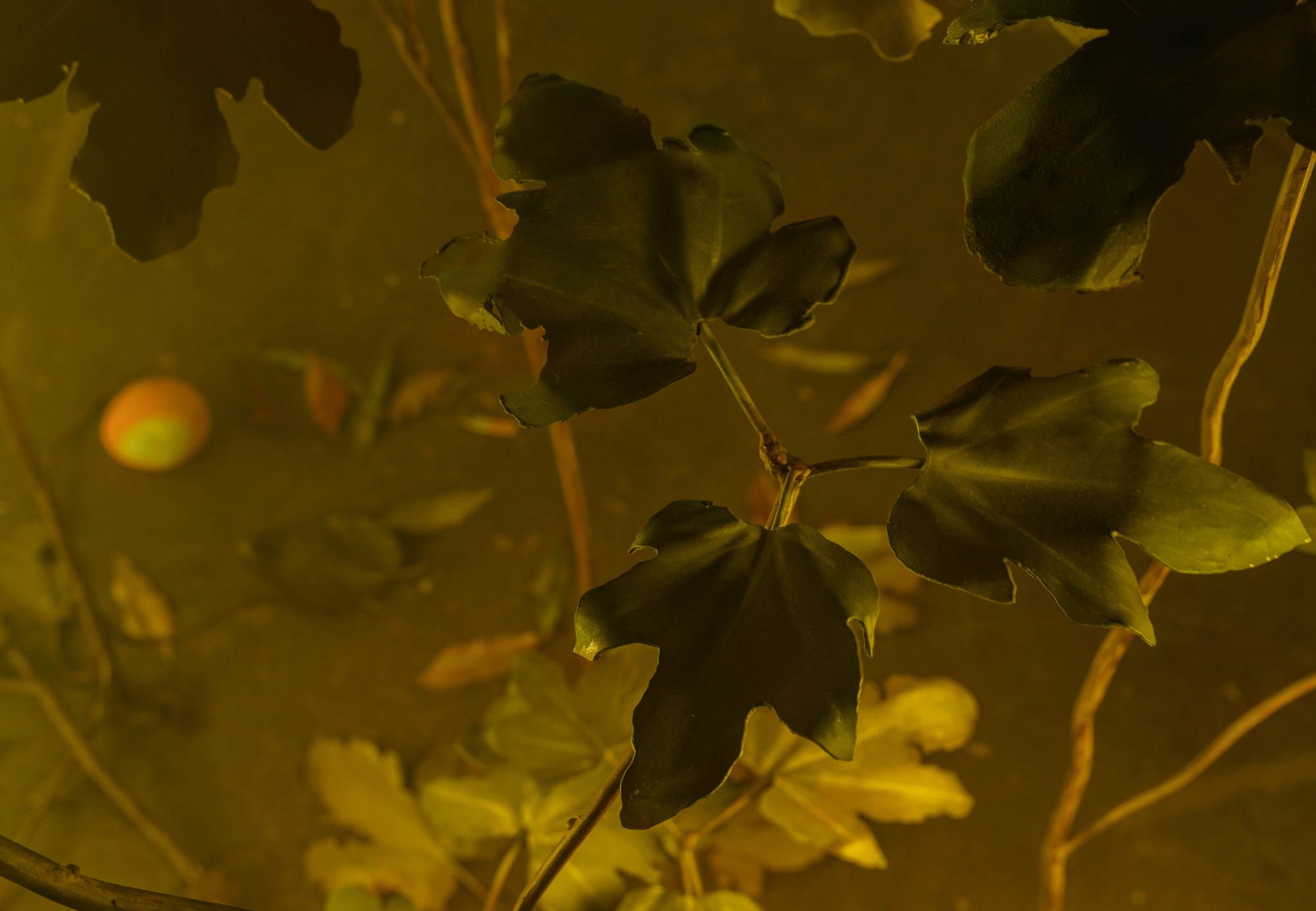 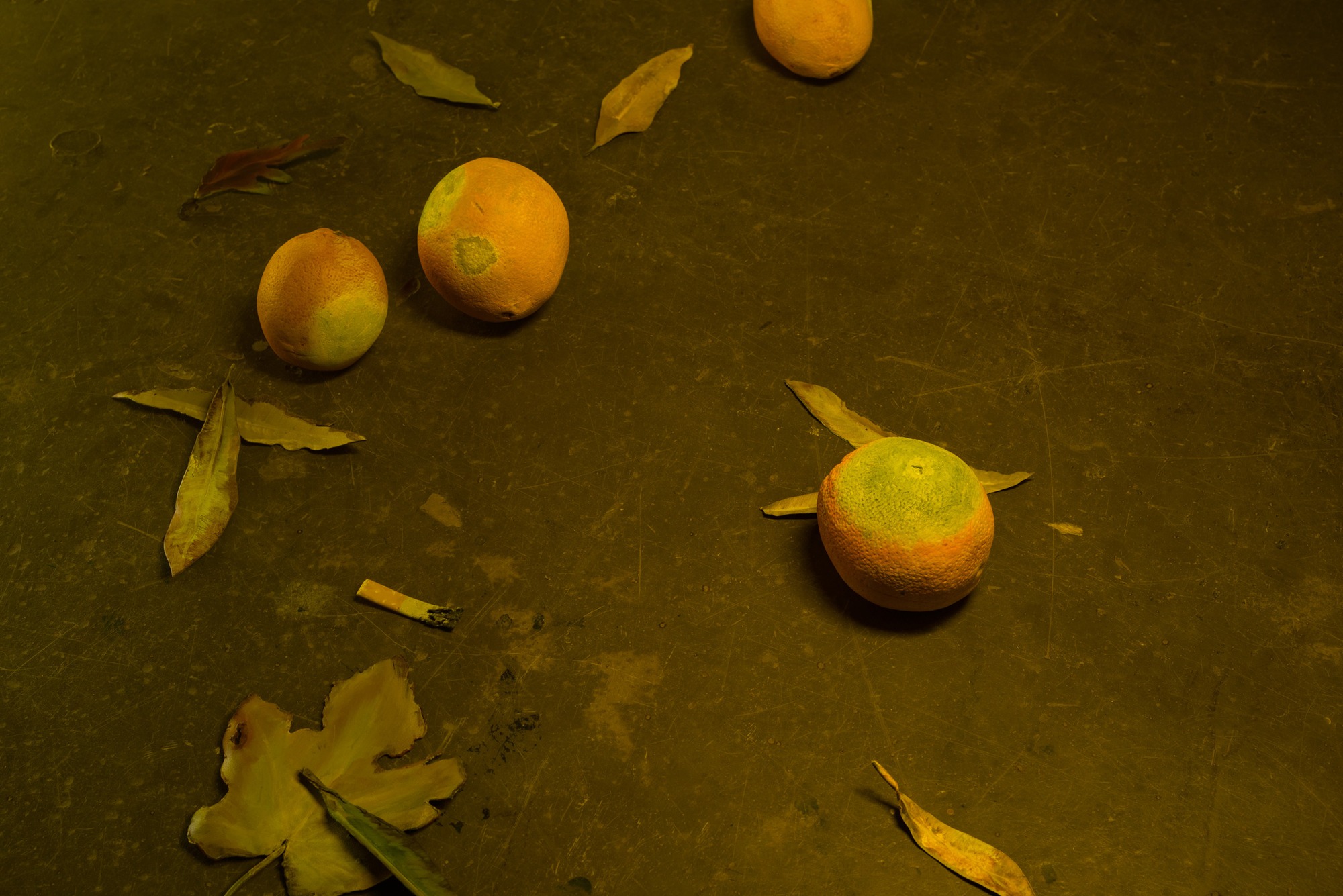 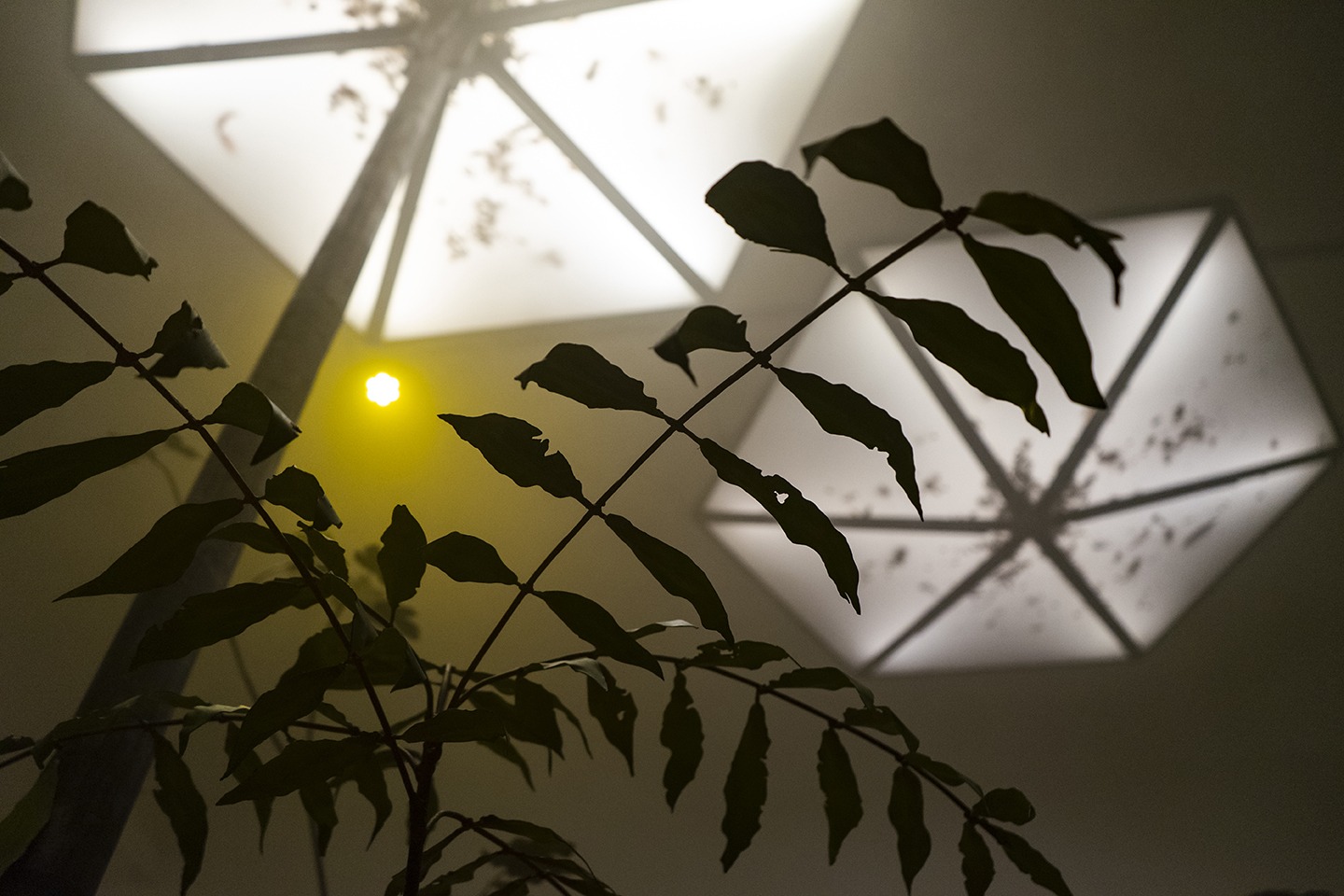 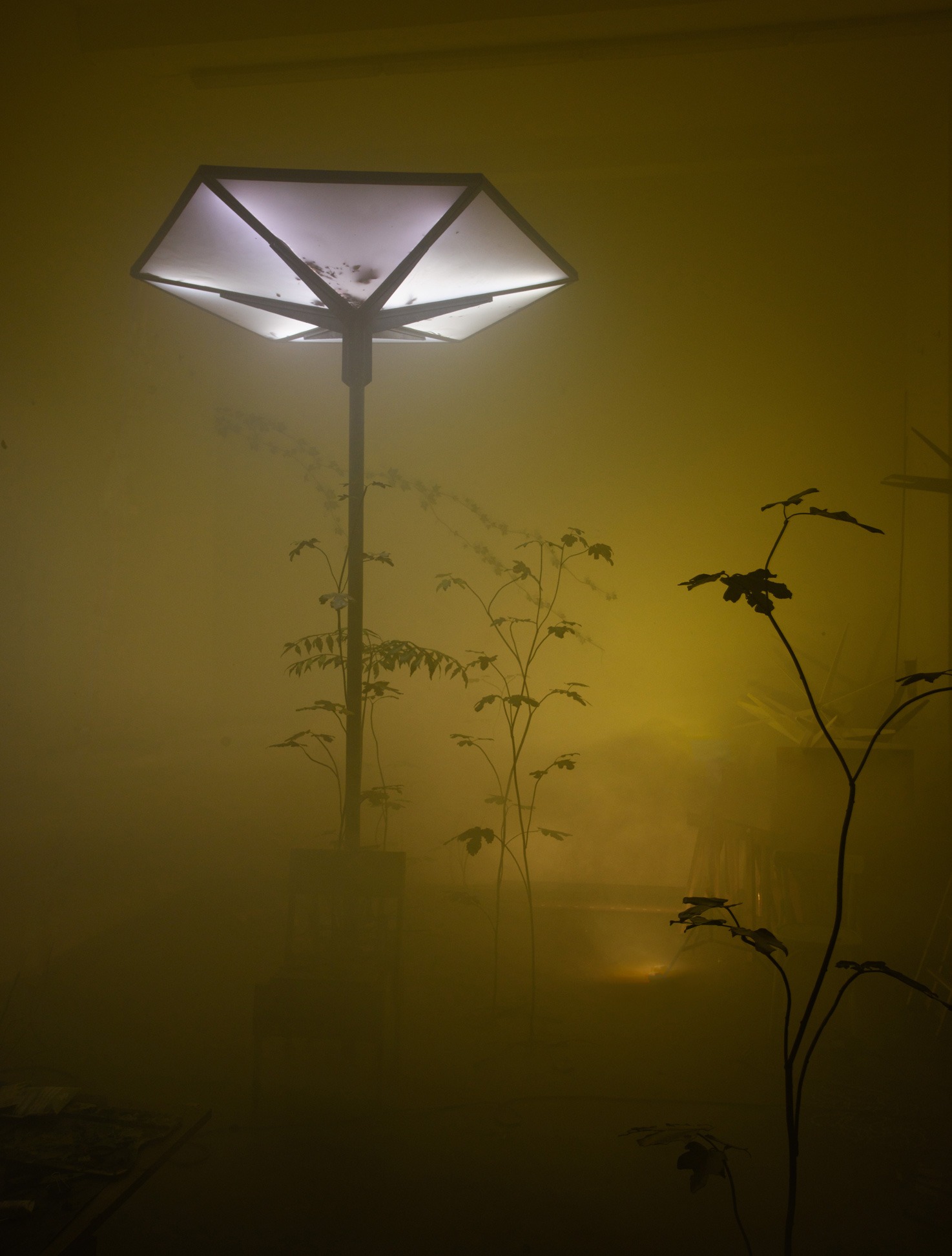 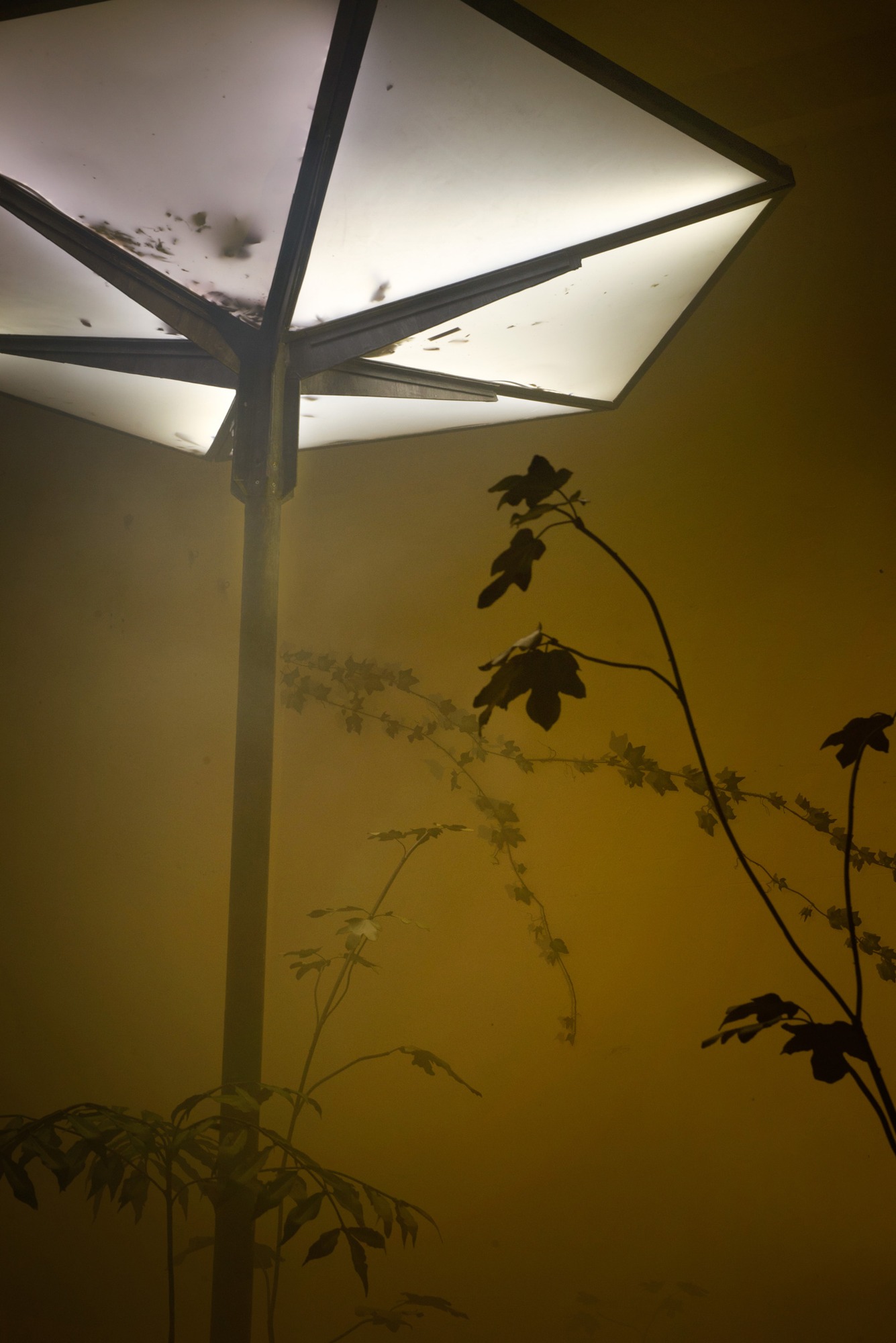 Alvaro Urbano: The Awakening, exhibition view at La Casa Encendida, Madrid, 2020, Photo: Trevor Lloyd
La Casa Encendida of Montemadrid Foundation opens The Awakening, the first solo exhibition by artist Alvaro Urbano in Spain (Madrid, 1983). Presented in a single scene, the immersive installation specifically created for La Casa Encendida deals with different imaginaries of abandonned architectural structures, their past and possible futures. Silenced by the passing of time, they appear as fictional scenarios where their stories come back to life, updating their architectural value as well.

Considered a benchmark of Spanish architecture designed by the architects Ramón Vázquez Molezún and José Antonio Corrales Gutiérrez, the Hexágonos Pavilion becomes Urbano’s case study. The avant-garde construction – made of a prefabricated structure that can be enlarged or reduced depending on the topography - won the Architecture first award at the Brussels Universal Exhibition in 1958, contesting with Atomium by the André Waterkeyn and the Philips Pavilion by Le Corbusier. During the Franco era, the pavilion was placed at Casa de Campo in Madrid and it was used to celebrate the International Agricultural Fair. Afterwards, it had no further use and deteriorated to the point of turning into ruins. Today, it is still abandoned despite successive restoration announcements.

As an unscripted film that captures everyday life, Alvaro Urbano’s The Awakening constructs a parallel life to an exhausted building to revive apparently dormant stories. Here, where the architecture and vegetation seem to be on hold, where the building itself encapsulates a pictorial and sonorous landscape revealing the stories lived within its walls and where a pair of raccoons dwells in intermittently, a twilight fills out the space with color and brings it to life.

The theatrical, the ludic and the dreamlike traits are present while the architecture, the light and the sound– the last two elements specifically elaborated for this installation– invite us to plunge into the artwork.

Carried out in a joint effort by Acción Cultural Española, Storefront for Art and Architecture and La Casa Encendida, this artistic installation takes shape like a strange, apparently endless dream. The Awakening thus recuperates a building whose life seem to have already expired. Through this immersive installation, made of fragments from the body of the building, a forgotten structure is recovered to think and speculate about its past and possible futures.

Alvaro Urbano (Spain, 1983) lives and works in Berlin. He studied at the School of Higher Technical Studies of Madrid (ETSAM) and at the Institut für Raumexperimente of the Universität der Künste in Berlin. He is currently a professor at the École Nationale Supérieure des Beaux-Arts in Paris. In 2014 he received the Villa Romana award. His work has been exhibited in different institutions and organizations such as Bundeskunsthalle, Bonn; Hamburger Bahnhof, Berlin; Neue Nationalgalerie, Berlin; Kunsthalle Düsseldorf; Art Basel Statements with ChertLüdde; among others. Coming soon, he will exhibit at the Storefront for Art and Architecture, New York.

José Esparza Chong Cuy (Mexico, 1984) is the executive director and chief curator of Storefront for Art and Architecture in New York. Previously, he worked as associate curator at Contemporary Art Museum of Chicago (MCA). He co-curated Lina Bo Bardi’s itinerant retrospective: Habitat, co-organized by the MCA, the São Paulo Art Museum and the Jumex Museum in Mexico City. Before joining the MCA, Esparza Chong Cuy worked as an associate curator at Jumex Museum. While living in New York from 2007 to 2012, he performed several functions such as associate curator at Storefront for Art and Architecture, research fellow at the New Museum and deputy editor of Domus

magazine. In 2013 he co-curated the Lisbon Architecture Triennale. He has a master’s degree on Critical, Curatorial, and Conceptual Practices in Architecture from Columbia University.
www.lacasaencendida.es