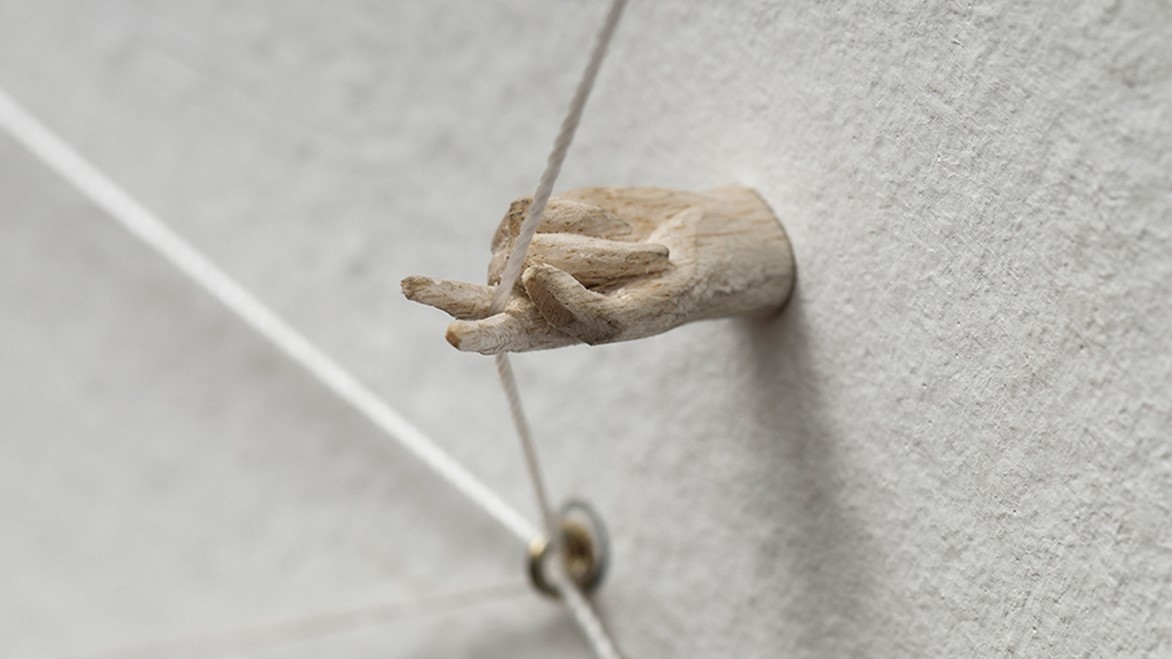 This show presents selected works by the artist Nicolás Robbio that reveal part of his practice, primarily focused on installations which stem from the idea of drawing as a process of expansion.

The pieces on display illustrate two fundamental concepts in his oeuvre: the idea of gravity, and drawing as an act of resistance. These works, conceived as collective memory exercises, draw a metaphorical analogy between the utopian philosophies of rational logic and the mathematical geometry found in the movements of nature.

For Nicolás Robbio (b. Mar de Plata, Argentina, 1977), drawing is a way of seeing the world; underlying the pencil and paper is a mechanism whose construction mirrors that of nature, where everything is connected and the sum of several elements produces new ones. Consequently, the act of drawing connects with the unconscious and the most atavistic gestural form, which in turn is related to mechano-sensory comprehension, the construction of the subjective line and everything that links physical action to psychomotor memory.

From the beginning of his career, Robbio has viewed drawing as a field of research; in fact, for years he has made a habit of creating one drawing each day as an intimate experience. In this daily routine, the constant repetition of even the smallest motion creates volume, and so the discipline transforms a simple action into a constant projection. As the artist explains, "In theory drawing has this same principle: the line is an unbroken succession of points in space, the point becomes line, the line becomes plane, the plane becomes volume, and a pencil becomes a tool of resistance."

The artist's study of drawing began with an IRAM (Argentina’s official standardisation and certification body) manual in which he found all the symbols used by engineering draughtsmen when making technical plans: letters, numbers, dots, arrows, scales, structural lines, sections, perspective views, etc. In short, Robbio discovered everything needed to produce a plan with technical information in these mechanical manuals, and he was fascinated by the painstaking precision used to render those drawings comprehensible. From that moment on, the artist's attraction to technology, engineering and scientific and mathematical knowledge became patent in many of his works. That interest, combined with other points of reference like Magritte, Richard Buckminster Fuller, Nikola Tesla and Jorge Luis Borges, reaffirmed the ambivalence and multiple interpretations that characterise his work.

The pieces featured in the exhibition reflect the logic of drawing to which the artist has often referred, from Discurso [Discourse], a large-scale grid applied directly to the wall in allusion to the order it symbolises, to the installation entitled Plano expandido (cuestiones al trazar una línea) [Expanded Plane [Questions When Drawing a Line)], consisting of three hundred and nineteen wire lines on the wall. Those lines, sinuous stripes that symbolise border outlines, metaphorically redefine the meaning of cartography, alluding to the burden of memory and the symbolism of those contours which separate neighbouring countries. And that geographical delimitation, also found in Los paisajes sólo existen en la memoria [Landscapes Only Exist in Memory], is a map, essentially a code for reading the cartographic language that alludes to the construction of the mental landscape. Many of Robbio's creations have a strong physical component that has to do with the use of certain materials and objects related to contained force. This is especially evident in Arquitecturas de reyes (Ejercicios de tensión) [Architectures of Kings (Tension Exercises)], where a system of lead weights and continuous ropes reveal the force of gravity through their functional memory. Here, a series of objects and a few natural elements—branches, pieces of wood, bones, etc.—are supported by the pressure that the rope exerts on the wall. The relationship between the different elements makes it possible to create an architecture where the various objects and the rope structure that holds them in place are linked to the physical and symbolic form. In another piece in the exhibition, Conflictos en el campo Y-X [Conflicts in the Y-X Field], the artist made stripe-like incisions on chalk paint, leaving grooves that rendered the wax coating useless and thus allowed him to reconstruct the object's functionality. Finally we find Tonelada [Tonne], a mound of sand illuminated by a lamp that reiterates the idea of containment and the union of molecular elements to represent a larger one, a concept to which the artist refers in various works.

This exhibition assembles many of the artist's lines of research that involve the use of simple, everyday materials like coins, ropes, wood or graphite—materials that generate movement to reflect on the transformation of gravitational force into horizontal or vertical force. Nicolás Robbio speaks to us of memory and matter, abstraction and geometry, but above all, through the subtle frailty of the finish of his works, he draws us into those exercises in impossibility which are, ultimately, logics of drawing.

La Casa Encendida has organised this exhibition in collaboration with the Argentinian Ministry of Culture in connection with ARCOMadrid 2017, where Argentina is the guest country.
www.lacasaencendida.es