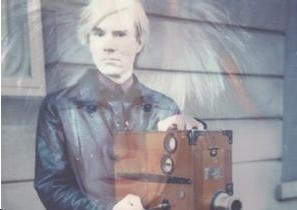 In the words of the project curator Estrella de Diego, "One of the main aims of the exhibition is to show the different techniques Warhol used and exhibit them, above all, as sort of preparatory drawings, using repetitions of images in different formats to emphasise Andy Warhol's narrative formula, his way of narrating the world, always in the same way, by means of the camera, photos, stitched photos, Polaroids, photo booth strips, films, paintings. Warhol on Warhol is an attempt to show a Warhol little known to the Spanish public, a Warhol who at every step ¿ as revealed by his modus operandi ¿ transfers the 'authorship' to any willing beholder: to you yourself".

The exhibition will feature more than 200 items from institutions, private collections and galleries, including, for example, the very delicate Polaroids rarely exhibited and acetates on public display for the first time.

In addition, the mezzanine level will display audiovisual documentation about the artist in a programme entitled "Acerca de Andy Warhol, Documentos, Retratos y Documentales" (Documents, Portraits and Documentaries About Andy Warhol). This selection offers an insight into Warhol as seen by his contemporaries. Most of the films are by well-known film-makers from the experimental scene of the 1960s, such as Willard Maas, Jonas Mekas, Marie Menken, and Steina and Woody Vasulka. All of these were regulars at the Factory at that time, filming events, exhibitions and every-day scenes with Warhol and his entourage of superstars. Completing the programme are two more recent documentaries that look at Warhol¿s life and work from his early days in the fashion world to his premature death in 1987.

An Andy Warhol film festival is also scheduled to take place, during December and part of January. Twenty-two films by the US artist will be screened, including titles such as Sleep, The Chelsea Girls, Vinyl, The Velvet Underground and Nico, or Empire.

From 1987 to 1989, she was a Fulbright scholar at the Institute of Fine Arts at New York University, and became the first woman to hold the prestigious King Juan Carlos I of Spain chair for Spanish Culture and Civilisation at the Juan Carlos I centre at New York University. She has also taught at universities in the US, Latin America and Europe, and during the first semester of 2002 was a guest lecturer of the Ford Foundation at Illinois University at Urbana-Champaign.