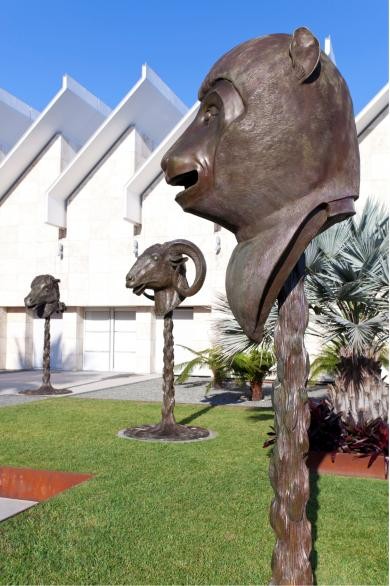 The Zodiac Project is Ai Weiwei's first major public sculpture. For this monumental new work, Ai has recreated the famous twelve bronze animal heads that once adorned the Zodiac Fountain in Yuan Ming Yuan, the Old Summer Palace, in Beijing. Cast around 1750, the original heads were looted by Anglo-French troops who took part in the destruction of Yuan Ming Yuan in 1860 during the Second Opium War. The heads remain a potent trigger for Chinese nationalist sentiments. Ai's new work suggests a dialogue about the fate of art objects that exist within dynamic and sometimes volatile cultural and political settings.

Ai Weiwei is known for his constant engagement with Chinese history as a shifting site rather than a static body of knowledge. With his subversive wit, the artist adapts objects from the Chinese material canon going back to antiquity, twisting traditional meanings toward new purposes. Ai's continuous exploration of the historical object finds great resonance with the encyclopedic collection of LACMA, which includes Chinese art from the Neolithic to the Qing Dynasty period.

Ai Weiwei grew up the son of acclaimed poet Ai Qing and spent several years as a child exiled in the countryside during the Cultural Revolution. He spent more than a decade in New York, returning to China in 1993. He was detained in April, 2011, for close to three months before being charged with tax evasion and released on bail. He is currently prohibited from leaving Beijing. He has become an international symbol of the ongoing struggle for freedom of expression and dissent.
www.lacma.org