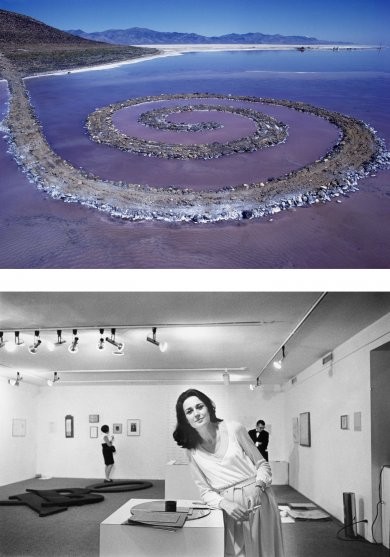 Los Angeles to New York: Dwan Gallery, 1959–1971 presents the storied history of the Dwan Gallery, one of the most important galleries of the postwar period in the U.S., and the dealer and patron Virginia Dwan. Founded by Dwan in a storefront in Westwood in 1959, the Dwan Gallery was a leading avant-garde space during the 1960s, presenting groundbreaking exhibitions by Edward Kienholz, Yves Klein, Franz Kline, Claes Oldenburg, Robert Rauschenberg, Ad Reinhardt, and Robert Smithson, among others. A keen follower of contemporary French art, Dwan gave many of the Nouveau Réalistes their first shows in the U.S. In 1965 she established a second space in New York City; Dwan New York would go on to provide the first platform for now-major tendencies in the history of contemporary art including Minimal Art, Land Art, and Conceptual Art. She was a leading patron of earthworks and sponsored major projects including: Heizer’s Double Negative (1969) and City: Complex One (begun 1972); Smithson’s Spiral Jetty (1970); De Maria’s 35-Pole Lightning Field (1974); and Charles Ross’s Star Axis (begun 1971).

Dwan was a major force in the international art world yet has received relatively little attention, due in part to the closure of her gallery after only eleven years in 1971 (her Los Angeles space closed in 1967). Featuring paintings, sculpture, films, and drawings by a wide range of artists, this exhibition retrieves Dwan’s singular contributions and reexamines the important history she made, highlighting in particular the increasing mobility of the art world during the late 1950s.
www.lacma.org