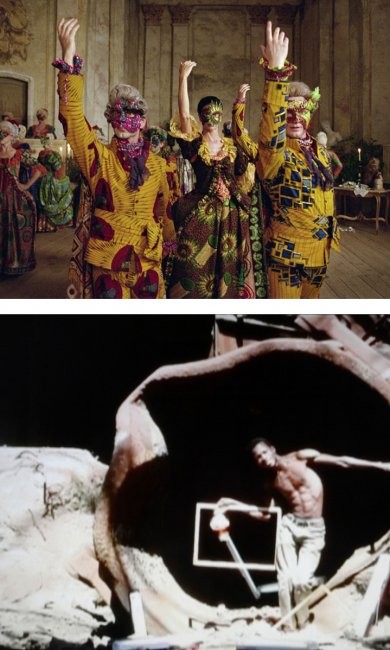 Our hearts beat to the rhythms of biological time and continents drift in geological time, while we set our watches to the precision of Naval time. Time may be easy to measure, but it is challenging to understand. Five leading contemporary artists of Africa explore temporal strategies to convey how time is experienced—and produced—by the body. Bodies climb, dance, and dissolve in six works of video and film, or “time-based” art. Characters and the actions they depict repeat, resist, and reverse any expectation that time must move relentlessly forward.

Senses of Time invites viewers to consider tensions between personal and political time, ritual and technological time, bodily and mechanical time. Through pacing, sequencing, looping, layering, and mirroring, diverse perceptions of time are both embodied and expressed.

Yinka Shonibare’s European ballroom dancers in sumptuous African-print cloth gowns dramatize the absurdities of political violence as history repeats itself, while Sammy Baloji envisions choreographies of memory and forgetting in the haunted ruins of postcolonial deindustrialization. Berni Searle addresses genealogical time as ancestral family portraits are tossed by the winds and waves of generational loss, as well as the slippages and fragility of time and identity. Moataz Nasr’s work treads on personal identities distorted by the march of time, and Theo Eshetu draws us into a captivating kaleidoscopic space in which past, present, and future converge.
www.lacma.org