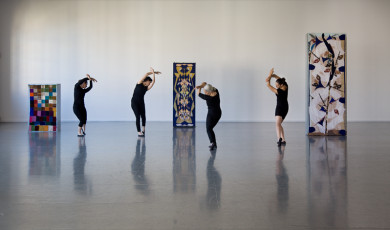 The newest work by renowned Los Angeles artist Sharon Lockhart (United States, born 1964) is a multimedia meditation on the achievements of Israeli dance composer and textile artist Noa Eshkol (Israel, 1924–2007). Lockhart has, since the 1990s, used film and photography to memorialize specific, quotidian moments in particular communities. She discovered Eshkol’s groundbreaking work during a 2008 residency in Israel. Eshkol is best known for developing in the 1950s, with architect Avraham Wachman, the Eshkol-Wachman Movement Notation (EWMN) system, which uses a combination of symbols and numbers to define the motion of any limb around its joint. Eshkol developed a dance practice based upon its simple structures. Lockhart filmed Eshkol’s aging students and a newer generation of dancers performing her choreography in an effort to bring to light her visionary work. Sharon Lockhart | Noa Eshkol, conceived as a two-person exhibition, presents Lockhart’s five-channel film installation and series of photographs of EWMN spherical models together with a selection of Eshkol’s carpets, scores, drawings, and other archival materials.
www.lacma.org