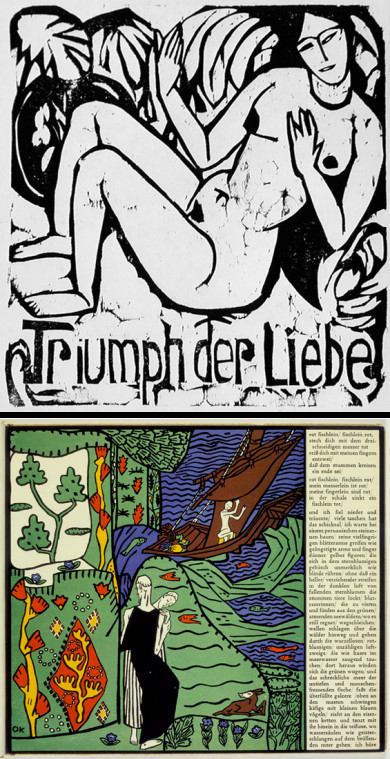 Artists, designers, and publishers frequently collaborated in early 20th-century Germany, producing portfolios, periodicals, and books that became an arena for exchange and a vehicle for promoting modernist innovations.

For artists including Oskar Kokoschka and Ernst Ludwig Kirchner, prints issued as single sheets, in portfolios and in bound volumes were an expedient and flexible way of disseminating aesthetic novelties to a wide audience. Literary themes, inspired by old and modern masters, pervade these artists’ work, and were especially well suited to be developed as serial imagery.

Artists such as Ernst Barlach, Kokoschka, and Conrad Felixmüller were also authors who wrote novels, plays, and poems that they illustrated. After World War I, artists—owing largely to the encouragement of publishers and dealers, and supported by Germany’s important printing industry and advancements in technology—worked in styles as diverse as Dada, Neue Sachlichkeit, and the Bauhaus, continuing to invest their creative efforts into books, periodicals, and print portfolios.

Selected from works in the Prints and Drawings Department and from the Robert Gore Rifkind Center for German Expressionist Studies at LACMA, this exhibition explores the rich and varied dialogue between the written word and the print in all its manifestations.
www.lacma.org