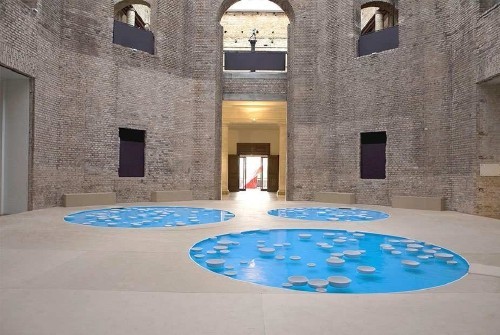 The work of Céleste Boursier-Mougenot must be seen first and foremost as that of a musician who, for the past twelve years, has shown his work exclusively in contemporary art venues. From 1985 to 1994, he composed for author and director Pascal Rambert’s Side One Posthume Theatre company, following which he began to give his work an autonomous existence through installations.

Céleste Boursier-Mougenot succeeds in drawing out the musical potential of multiple and diverse objects and situations. He extends the notion of musical score to the unorthodox combinations of miscellaneous materials and media which he uses to generate, usually live, what he describes as living sound forms.

Each device functions in relation to the surrounding architecture or environment, where the process behind the music is laid bare for the visitor to see and comprehend.

Céleste Boursier-Mougenot works with Paula Cooper Gallery, New York. He was awarded the 1998 P.S.1-Institute for Contemporary Arts- AFAA Artists’ Studio Program. Since 2006 he has worked with Galerie Xippas in Paris.
www.lamaisonrouge.org