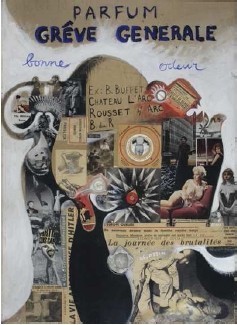 More than an exhibition, what we have here is a montrage (a “Show/editing”), to employ the term invented by the artist himself. Lebel offers us a whole “arranged in terms of the connections or caroms among the works--among their contents, not among their commercial values--and this is done in such a way as to encourage movements of thought in all senses of the term.” In other words, this montrage is a unique way of presenting objects that, a priori, have nothing to do with each other, but which “share some common issues and modes of operation that serve to intensify one another.”
Entitled Uprisings, the exhibition pertains to “a process that is at once artistic, historical, mental, personal, and social--which implies a long process of maturation and multiple encounters, influences, exchanges, and permutations” (JJL).

The exhibition is divided into themes. Each corresponds to Jean-Jacques Lebel's obsession with the enigma which a work and the wider context of its emergence raise. Happenings, Insubordination, Poetry, Hallucination, Eros, Dada, War and Rhizome are some examples. Through these interconnecting ensembles, visitors can engage with some of Jean-Jacques Lebel's major installations, works of primitive art, works by anonymous artists and others by such important allies as Johann Heinrich Füssli, Giuseppe Arcimboldo, Louise Michel, Fourier, Ravachol, Guillaume Apollinaire, Marcel Duchamp, Pablo Picasso, Otto Dix, George Grosz, André Breton, Francis Picabia, Antonin Artaud, Victor Brauner, Bernard Heidsieck, Erró, Antonio Saura, Peter Saul, Camilla Adami and Orlan: some three hundred works in all which continue to engross the artist in an earnest and endless dialogue.