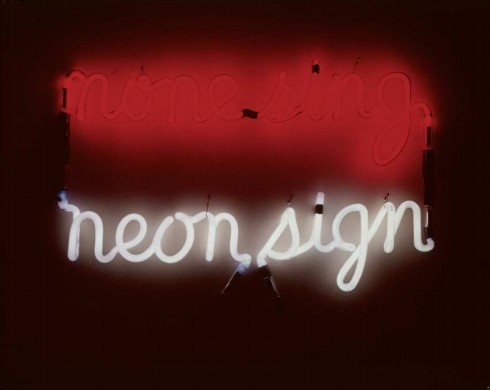 Throughout winter 2012, la maison rouge will stage the first major international exhibition of neon art from the 1940s to the present day. Some one hundred works will be presented in all, many of historical significance, many being shown for the first time. They will include pieces by such pioneers as Lucio Fontana from the early 1950s, François Morellet, Bruce Nauman, Stephen Antonakos, Joseph Kosuth and Mario Merz from the 1960s, and some of the many contemporary artists working in this medium, such as Jason Rhoades, Sylvie Fleury and Claude Lévêque.
On the right-hand side of Mendeleev’s periodic table are the so-called ‘noble’ gases, a group of chemical elements with common properties: under standard conditions, they are all odourless and colourless, but under pressure these mono-atomic gases produce a coloured light when an electric current is passed through them. Neon (Ne), from neos, the Greek word for new, emits a red light. Argon (Ar) produces a blue light, while the light from sodium vapour is yellow.
French physicist and chemist Georges Claude developed the first neon tube in 1912, exactly one century ago. He unveiled his invention publicly at the Paris World Fair. A few years later, Claude filed a patent in the United States and, in 1923, sold his first two neon signs - reading ‘Packard’ - to a car dealership. The rest is history...
As early as the 1930s, Moholy-Nagy was predicting that it would not be long before the “field of expression” formed by night-time city lights found “its own artists.”
Lucio Fontana showed the first ever work in Europe to be made entirely from neon, at the 1951
Milan Triennial: a vast, glowing, suspended whirlpool.
In the early ‘60s, in France, Greece and the USA, François Morellet, Stephen Antonakos, Bruce Nauman and Keith Sonnier began to use neon in their performances and visual works. Around the same time, Dan Flavin started working with a specific type of lamp: fluorescent tubes. All the work from this period was of an abstract nature, whether lyrical or geometric. In the mid-sixties, neon learned to 'talk' and 'count,' first with Joseph Kosuth’s neon tautologies then, a few years later, Maurizio Nannucci’s early ‘writings’ - neon words or fragments of sentences in which colours, signs and meaning meld into one. At the same time, Mario Merz and Pier Paolo Calzolari incorporated neon words and numbers into their sculptural and/or sound installations.
Martial Raysse, meanwhile, was including neon punctuation marks –‘signs of desire’- in his assemblage-paintings. Michel Journiac created ‘Piège pour un voyeur,' a performance piece comprising a prison cell with neon tubes for bars, and a naked model inside.
In scarcely thirty years, this multitude of experiments and research took neon from a scientific invention, used primarily for advertising in urban areas, to an artistic medium in its own right. Now neon brings together artists as diverse as Tracey Emin, Claude Lévêque, Jason Rhoades . Art made of colour and light, yes, but neon art is also - first and foremost even - about line and curve.
Neon invites its public to follow and explore this simple line as it curves its way along innumerable winding, shining paths.
David Rosenberg