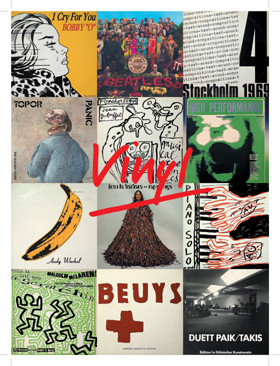 From February 19th to May 16th 2010, la maison rouge presents Vinyl, an exhibition of records and covers compiled by the British collector, publisher and curator Guy Schraenen. For more than 30 years, Guy Schraenen’s fascination with artists’ multiples (objects, catalogues, books, magazines) has led him to amass a unique and highly specialised collection on the theme of sound. Vinyl shows LPs from an acoustic and visual angle to illustrate how artists from the 1920s and throughout the twentieth century have experimented with language and sound. The exhibition presents close to 800 albums alongside tapes, CDs, specialist magazines, reference books, catalogues and artworks. As artists began to work with sound, and as records and covers became media for the visual arts, a new and extremely creative art form appeared. Artists from different currents imagined sleeves for their own recordings; the album cover gave artists an especially stimulating format. For those who grew up with vinyl, albums and covers are a part of their personal history; for the post-vinyl generations, they have a legendary aura. Vinyl is organised in sections, beginning with 1920s avant-garde movements such as dadaism and futurism through Fluxus, new realism, pop art, the Zaj group and conceptual art, and ending with the most recent sound experiments. Many of these recordings document performances and happenings, two essential manifestations of artistic movements of the 1960s and 70s. The exhibition takes in sound poetry, and presents records by artists such as Hanne Darboven, Jean Dubuffet, Dieter Roth, Joseph Beuys, Laurie Anderson, William Burroughs and Allen Ginsberg, Henri Chopin’s OU magazine and the Giorno Poetry Systems. Singles feature works by artists including Yves Klein, Roman Opalka, Hermann Nitsch, Tom Wesselmann and Karel Appel. The link between the visual arts, rock and pop is highlighted with records by the Rolling Stones and the Beatles, and by more recent groups such as Kraftwerk and Sonic Youth. They became icons in the hands of Andy Warhol, Robert Franck, Peter Blake and Raymond Pettibon. Another part of the exhibition focuses on records as objects, i.e. records that break with the classic round shape. Visitors can listen to every record in the collection at a specially-designed deck. Vinyl is organised by the Research Centre for Artists’ Publications/Neues Museum Weserburg Bremen, Germany and by the Museu d’Art Contemporani de Barcelona (MACBA), Barcelona, Spain.
www.lamaisonrouge.org