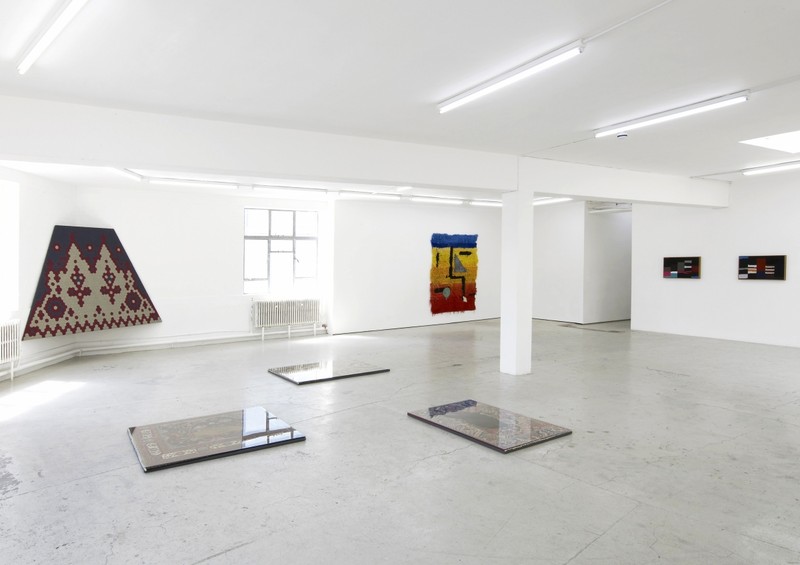 Anthropomorphic inanimate objects and the hybrid of man and animal is a recurring feature of encounters with Caroline Achaintre’s work, which alongside ceramic objects includes large tufted-wool hangings and watercolours on paper. Achaintre’s practice is often discussed in relation to primitivism, expressionism and postmodern design, and the visual implementation of western subcultures.

Achaintre’s starting points are images distilled from publications of European fetish and carnival traditions. It is the process of transition from sourcing an image in which a living form becomes abstract that results in the artists’ figures and ambiguous shapes. To make her hand tufted-wool works, Achaintre tufts each individual piece of yarn through a large marked-up and stretched canvas. The length, texture and colour of each thread take on qualities of painting. Besides suggesting technological precision and the connoisseurship of post-industrial craft, there remains an odd tension between content and form, abstraction and figuration, absence and presence. Her large-scale compositions such as Wanderer (2012), exploit the power of the grotesque, provoking menacing, uncertain undertones of ritual and routine – a mirrored reality of fantasy and fear.

Caroline Achaintre (b. 1969, Toulouse, FR, lives and works in London), studied at Goldsmith College of Art London (2003), Chelsea College of Art & Design (2000) and Kunsthochschule Halle, Germany (1998). Her work has been included in exhibitions at Musee d’Arte Moderne de la Ville, Paris; Mocca Toronto; Whitechapel Gallery London; David Roberts Art Foundation, London. In October this year her work will be the subject of a ‘Spotlight’ at Tate Britain, London; and in November she will have a solo show at the Castello di Rivoli, Museo d’Arte Contemporanea, Turin. She is currently an artist in residence at Camden Arts Centre, London.

Nina Beier’s practice is best characterised by a rigorous investigation of inherent meaning in things and actions. Aspects of production and ideas of display, value and ownership, and the manner in which these are perceived and received, are amplified and subverted in many of her diverse works. The performance and meaning of objects – how they change through time or alter according to context and presentation – and their potential to appear contradictory are crucial and recurring themes in Beier’s work.

In Minutes (2014), Beier arranges wigs on Wagireh rugs. Originally used to pass on different family styles through generations or as samples for travelling salesmen, these small rugs are compressed summaries of all the patterns of an actual rug. The wigs, pressed against the rugs, are real human hair wigs; frozen haircuts from different times, made of hair that will never grow any further. From China and India, the hair has been bleached, permed and dyed in order to imitate a variety of hair styles. Traditional handcraft meets degrading trade, the body itself becomes a commodity.

Anna Betbeze’s endeavour to go beyond material transformation results in colour experiments and textural entities that appear as desirable as they are traumatic. Her signature works are made from wool-fibred Flokati rugs, traditionally hand-made in the Pindus Mountains in Greece. Betbeze repurposes the material to create perforated, multi-hued wall reliefs, blurring the line between painting, sculpture and found object. The artist creates a dynamic relationship between colour-saturated forms and the negative space of the wall. Using toxic and natural processes, the wool becomes a ground for acid dyes and watercolour pigments, and for various actions like cutting, burning and tearing. Describing the carpets as “sites for colour and material transgressions,” her work involves external forces such as fire and water and evokes natural cycles of decay and regeneration.

Betbeze’s tactile works on wool engage destructive processes as a mode of transforming material, using the object’s resistance to generate new forms. Hydra (2012) is hanging on the wall like a trophy, tenuously from simple nails, sagging under its own palpable weight. There is an innately human quality present that, despite any direct reference to the body, holds a strong visceral connection when experienced in situ.

Anna Betbeze (b. 1980 in Columbus, GA, she lives and works in Rome) She received her BFA from the University of Georgia (2003) and her MFA from Yale University School of Art (2006). She has held solo exhibitions at Kate Werble Gallery, New York; Massachusetts Museum of Contemporary Art, North Adams; Luettgenmeijer, Berlin. Her work has been shown at Moma PS1, New York; Musee d’Arte de la ville Paris, Paris. Betbeze ist the recipient of the 2013 – 2014 Harold M. English/Jacob H. Lazarus – Metropolitan Museum of Art Rome Prize.

Over the course of a career that spans four decades, Norwegian artist Sissel Blystad has developed a sophisticated practice exploring the limits of textile as a medium for formal expression. Her works stand in the tradition of the Bauhaus philosophy, where the woven form as art or as means of personal expression was discouraged and utility and simplicity was valued. Besides applying their concept of colour and formal design vocabulary, the works refer to aspects of craftsmanship as well as to traditional textile techniques. Whereas the nature of the woven image sets restrictions on any change in design, her new body of work gives compositions of free forms priority. Tapestries, numbered and titled according to the order in which they were completed, allow improvisation and open up to a formal approach towards the paradox of imagery. The weaving machine has been replaced, and thick Norwegian fibres dyed by the artist are inserted by hand, arranged in lines or circles on a geometric shape.

Blystad’s work is a result of the Bergen Arts development which was started by the “Group 66” and reached its peak in 1970, the same year where Blystad received her degree from Bergen Arts and Crafts School. The Finnegård circle, the Lyn Group, Gallery l, the West Norway Art Academy, the Artists’ Centre and the free textile artists are key words, all perceived as a form of provocation by the society.

In considering the relationship between the social and political problematics of image and representation, Venezuelan artist Sol Calero’s primary field of interest are icons, meanings and their mediations. This way, Calero’s autobiography is particularly present, acting as a starting point from which she explores notions of individual and collective identity. Cultural codes and their ambiguities are surveyed in fabric constructions, found objects, archives, sculptures, paintings and drawings.

With her Tapestries, Calero is inspired by German textile artist Gunta Stölzl’s work and in particular Stölzl’s attempt to shift the connotations of weaving as “women’s work” to something connected to industrial design – giving new avenues and interpretations for both weaving and the movement of Bauhaus as well as the role that women play in these activities. Sourcing discarded jersey T-shirts as material, Calero considers in her series of Tapestries these same hierarchies inherent in our relationship to the art object and production. Cutting these fabrics into countless colourful strings, selecting and arranging them into various compositions, Calero also invites other people to contribute to the process of creating these works.

The multiple identities that operate within the work of American artist Christopher Kline engage with each other in a variety of ways and manifest themselves in performances, music and visual art. Kline takes on the role of a musician of the commercial pop act “Hush Hush”, is the founder of the independent projects space Kinderhook&Caracaas (with Sol Calero) in Berlin and was a member of art-collectives such as “Wooden Veil” and “Snakebraid”. With music that has been described as abstract, psychedelic, and often meditatively aligned, Kline continues exploring the dialogue between craft, art and rhythm in his lyrical installations. Robes, masks, quilts and paintings hang next to found objects that indicate a former history. Kline is interested in the potential of narrative installations and utilises patterns, materials, rituals and instruments which take on a prominent role, acting as substitutes to enable a metaphysical state.

Kline was born in Kinderhook, a small town in the Hudson River Valley, about 200 kilometres upstate from New York City. Olana Quilt (2014) is based on the design of the tower roof of the Orientalist mansion ‘Olana’, which was the historic home of Frederic Edwin Church (1826-1900). Church established himself as America’s foremost landscape artist of the Hudson River School. His travels to the Middle East influenced the architecture of ‘Olana’, which he started building in 1870 on a 126 acre hilltop estate overlooking the Hudson river. This land has been carefully designed to create scenic views on his house. The quilt, stretched like a painting, consists of small hexagons, sewed by hand. The work is inspired by the now-disbanded local women’s craft group ‘Kinderkrafters’ who would collectively create a new quilt annually to raffle off at the local summer craft fair. This way, the work stands both in the tradition of masculine architectural painting and is also closely tied o the local history of women’s creativity.

Kline’s most recent project is the gradual research and development of a theatre musical focused on the history and lore of his hometown Kinderhook, a village tied to the universal popularization of the term ‘O.K.’. From this starting point he investigates the ambiguities and anomalies of small-town cultural exports, and simultaneously links the spiritual with the experimental, the transcendental with the kitsch and reflects on the unspoken, inner life of patterns and objects.

Fay Nicolson works across painting, print, sculpture and photography, transforming works by dragging them through multiple processes. Temporary arrangements of objects become semi-abstract photographs. Watercolour paintings on graph paper translate into large digital prints on silk. Slipping between analogue and digital, playing with surface, spaces, layering and pattern to see how abstraction can function within the contemporary image, Nicolson often conducts repetitive visual and material exercises in her studio to generate large series of works that are then edited and displayed in formats conscious of their content.

Nicolson is interested in the idea of forming an aesthetic understanding, and the structures that are used to develop, define and document creative work and experience. Her ongoing body of silk works grow from a fascination with modern textile design, particularly the work of female artists and designers such as Anni Albers and Gunta Stölzl, who trained or worked at the Bauhaus. Nicolson recuperates the pre-digital design mediums of paint on graph paper, claiming them as her own, developing gestures beyond the remit of design, using the digital to flatten and distance an engagement with surface, texture and labour. Nicolson’s silk pieces play with the ‘textile’ work as functional or decorative object, opening its relationship to painting and the art object across time.

Working with found objects, Alek O. favours re-creation over creation and deconstruction over construction. Objects that happen to be at hand change shape and appearance, through processes like embroidering, assembling or casting. With the action of transforming an object, the artist chronicles the history of the sculptural material and links it closely to her own. Alek O. is interested in the transposition of the narrative to the context of the exhibition as an imprint of place and time.

The works in the exhibition are from a series of works made from lost gloves that he artist collected during the last four years in different cities such as Helsinki, Milan or London. Each glove is unravelled to return to its raw material, and rewoven to fit into a two dimensional frame. The result is a composition that follows the chronological order of the findings. The title of the works, Edward Higgins White IX – XI, suggests an intimacy by alluding to the idea of a portrait. Edward Higgins White was the first American astronaut to ‘walk’ in space and during this event he lost one of his thermal gloves. The textures of the fabrics, just as the various events related to their origin, are made and unmade in a solitary, intimate, long, laborious process. Alek O.’s works are an invitation to open up to observing reality and allow ourselves to be convinced that everything, be it an image, object or thought, can be renamed without losing meaning but acquiring others.