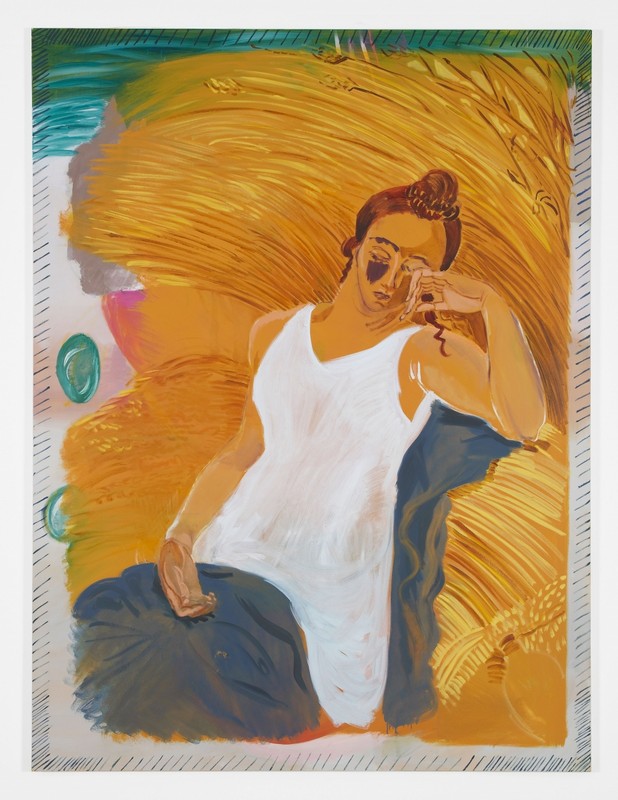 Signing one’s name; sketching from life; note–taking; the compulsion to scribble: Allison Katz’s new body of work sweeps across these categories of action. Underpinned by a dry wit, Katz draws energy from the equivalences of these actions as forms of mark–making, and by doing so, throws the capriciousness of taste into sharp relief.

Cast in this light, the title Katz has chosen for the exhibition takes on fresh significance. Regardless becomes a cypher for the fleeting encounters and portentous moments that mark the starting points of her works. Inspired by a chance glimpse of the sit–up–and–beg wooden clinker Regardless in Suffolk, Katz recently undertook to return to the boat and record her observations:

Regardless also indicates a willful indifference towards iconographic value. Recurring images– black pears, monkeys, wheat, noses in profile– are continuously shuffled and upended by new cues, symptoms, fantasies and autobiographical digressions. Bearing in mind the tensions between introverted and extroverted desires, and an attraction to the margins of narrative, Katz freely employs quotation and surprising combinations of colour and form. Katz’s handling of paint sees liquidity functioning as both motif and subtext. The potential to disappear, shift or transform is built into the still image. Transparency, layering and evaporation exist on a material level as much as they surface as meaning. The act of seeing–through, whether from a long view or as a glimpse, through a framing device or at an oblique angle, is central to this new group of works.

Laura Bartlett Gallery is pleased to present Allison Katz’s first solo exhibition in London, where she is now currently based. Her work encompasses painting, ceramic, graphics and sculpture. A selection of upcoming presentations include the inaugural exhibition at High Art, Paris; a site–specific installation with Camilla Wills for Lulu, Mexico City; and the group show ‘Noisy Spaghetti’ at Fauna, Copenhagen. Recent solo exhibitions include ‘The Thames started moving. Someone in Oxford is running a bath,’ Johan Berggren, Malmö (2013), ‘Postcard From... Allison Katz,’ a billboard commission from the Fondazione Pastificio Cerere, Rome and ‘Daymark,’ 1857, Oslo (2012). Katz has participated in numerous group shows including ‘The Stairs,’ Algus Greenspon, New York, ‘I Am The Magic Hand,’ Sikkema Jenkins, New York, ‘Gaylen Gerber,’ Museum of Contemporary Art, Chicago (with DAS INSTITUT) and ‘Notes on Neo–Camp,’ Studio Voltaire, London and Office Baroque, Antwerp (2013).

A feature article on her work was published in Kaleidoscope, Winter 2012/13. Her solo and group exhibitions have been reviewed in The New York Times, Texte zur Kunst, Artforum.com and The New Yorker, among others. Other related activities include participation in Chapter IV of the roving residency project Jerusalem, curating the exhibition ‘Portmanteau’ in July 2012 and the essay ‘The Not. The Eye. The Trick.’ for Charline Von Heyl’s monograph published by Les presses du réel (2010). Her publications include an edition for Gasconade, Milan and an insert in the latest edition of The Happy Hypocrite, ‘Freedom,’ edited by Lynne Tillman, published by Bookworks. She graduated with an MFA from Columbia University, New York, in 2008.
www.laurabartlettgallery.com