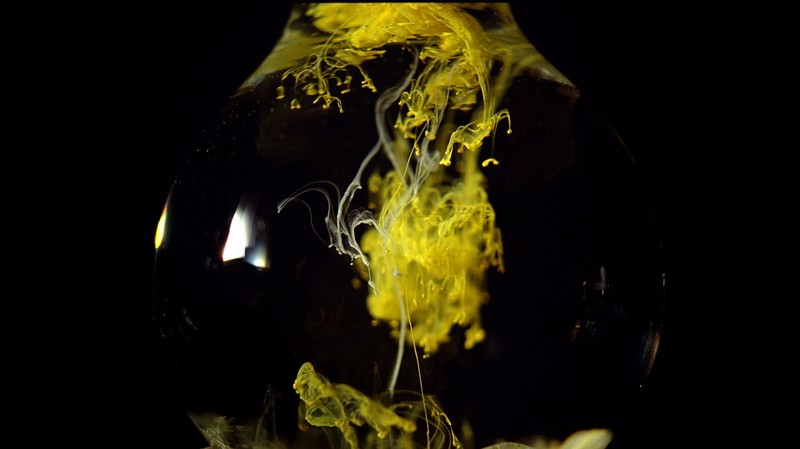 Laura Bartlett Gallery is pleased to present F for Fibonacci, the first exhibition at the gallery by British artist Beatrice Gibson.

F for Fibonacci is a new film that takes as its departure point American author William Gaddis’ epic modernist novel JR (1975). An eerily prescient, biting social satire, JR tells the story of a precocious 11 year-old capitalist who, with the unwitting help of his school’s resident composer, inadvertently creates the single greatest virtual empire the world has seen, spun largely from the anonymity of the school’s pay phone.

F for Fibonacci develops a particular episode from JR, in which a televised music lesson is scrambled with a maths class on derivatives inside the mind of its child protagonist. Musings on aleatory music become muddled with virtual stock pickings and a theory of ‘market noise’. Unfolding through the modular machine aesthetics of the video game Minecraft, text book geometries, graphic scores, images from physics experiments, and cartoon dreams, blend with images from wall street: stock market crashes, trading pits, algorithms and transparent glass.

As well as the writing of Gaddis, the film draws on the work of little-known British experimental educator and composer John Paynter, who infamously took Cornelius Cardew, John Cage and Karlheinz Stockhausen into primary schools, and who, along with better known figures such as art critic Herbert Read, was at the forefront of utopian post-war pedagogical movements orientated around child-centerededucation. Following Paynter’s lead, Gibson worked closely with 11 year old Clay Barnard Chodzko on a number of the film’s production elements, commissioning him to design an office in Minecraft and develop an existing character of his, Mr Money.Gibson and Chodzko’s ramblings on the subject of his protagonist lead the viewer through F for Fibonacci’s hallucinatory soup.

Mirroring JR’s preoccupation with indeterminancy and abstraction, at the centre of F for Fibonnaci the utopian and dystopian dimensions of abstraction are flipped: the avant-garde desires of Cage, Stockhausen and Paynter meet the entropic dimensions of dematerialized financial systems. If abstraction ultimately supposes authorial withdrawal: the ceding of control of production to the laws of chance is, of course, a gamble. But it’s not just the buccaneering financiers of deregulated markets that know how to roll dice. Gibson’s practice is also predicated on the idea of creating open ended compositional structures, landscapes in which an asynchronous assembly of elements: actors, objects, and images, are placed together and left to dance. The aleatory nature of this way of working affords F for Fibonacci its recursivity; the content and construction of the film follow the same methodology.

On the 6th of November Laura Bartlett Gallery in collaboration with Op.50 will host a unique performance to accompany the exhibition. At the invitation of the artist, two of the film’s characters: former financier, journalist and broadcaster Max Keiser and Anton Lukoszevieze, cellist and founding director of Apartment House, will respectively give a talk and perform a concert on the theme of abstraction in their respective fields.

A third element from the film also spills insidiously into the gallery space: a specially designed smell belonging to the screwball superhero Mr Money.

The exhibition is supported by the Elephant Trust and SCENT/london, with thanks to the Fiorucci Trust. F for Fibonacci was produced by somesuch. The smell piece was made in cahoots with Sarah Entwistle. The artist would like to thank in particular Anastasia Brozler, Rhydian Gywnn, Oliver Smith, Sarah Entwistle and Adam Broomberg.
www.laurabartlettgallery.com